Discover the extraordinary and almost unbelievable story of the three forgotten but largely intact German U-boats found in a destroyed bunker in Hamburg decades after the war.

Type XXI U-boats were a class of German diesel-electric Elektroboot (German: “electric boat”) submarines designed during the Second World War. Four were completed during the war and only two were sent for combat patrol and these were not used in combat.

They were the first submarines designed to operate primarily submerged, rather than spending most of their time as surface ships that could submerge for brief periods as a means to escape detection or to attack. They incorporated a large number of batteries to increase the time they could spend under water, to as much as several days, and they only needed to surface to periscope depth for recharging via a snorkel. The design included many general improvements as well: much greater underwater speed by an improved hull design, greatly improved diving times, power-assisted torpedo reloading and greatly improved crew accommodations.

After the war, several navies obtained XXIs and operated them for decades in various roles and large navies introduced new submarine designs based on them. These include the Soviet Whiskey, US Tang, UK Porpoise and Swedish Hajen classes, all based on the Type XXI design to some extent. The design remains the basis for modern diesel-electric submarines.

The main features of the Type XXI were the hydrodynamically streamlined hull and conning tower and the large number of battery cells, roughly triple that of the German Type VII submarine. This gave these boats great underwater range and dramatically reduced the time spent on or near the surface. They could travel submerged at about 5 knots (9.3 km/h; 5.8 mph) for two or three days before recharging batteries, which took less than five hours using the snorkel. The Type XXI was also much quieter than the VIIC, making it more difficult to detect when submerged.

The Type XXI’s streamlined hull design allowed great submerged speed. The ability to outrun many surface ships while submerged, combined with improved dive times (also a product of the new hull form), made it much more difficult to chase and destroy. It also gave the boat a ‘sprint ability’ when positioning itself for an attack. Older boats had to surface to sprint into position. This often revealed a boat’s location, especially after aircraft became available for convoy escort.

They also featured an electric torpedo-reloading system that allowed all six bow torpedo tubes to be reloaded faster than a Type VIIC could reload one tube. The Type XXI could fire 18 torpedoes in less than 20 minutes. The class also featured a very sensitive passive sonar for the time, housed in the “chin” of the hull.

The Type XXIs also had better facilities than previous U-boat classes, with roomier crew berths and a freezer for fresh foods.

Between 1943 and 1945, 118 boats were assembled by Blohm & Voss of Hamburg, AG Weser of Bremen and Schichau-Werke of Danzig. Each hull was constructed from eight prefabricated sections with final assembly at the shipyards. This new method could have resulted in construction time of less than six months per vessel, but in practice all the assembled U-boats were plagued with severe quality problems that required extensive post-production work to rectify. One of the reasons for these shortcomings was that sections were made by companies having little experience with shipbuilding, after a decision by Albert Speer. As a result, of 118 Type XXIs constructed, only four were fit for combat before the Second World War ended in Europe. Of these, only two conducted combat patrols and neither sank any Allied ships.

It was planned that final assembly of Type XXI boats would eventually be carried out in the Valentin submarine pens, a massive, bomb–hardened concrete bunker built at the small port of Farge, near Bremen. The pens were constructed between 1943 and 1945, using about 10,000 concentration camp prisoners and prisoners of war as forced labour. The facility was 90% completed when, during March 1945, it was heavily damaged by Allied bombing with Grand Slam “earthquake” bombs and abandoned. A few weeks later the area was captured by the British Army. 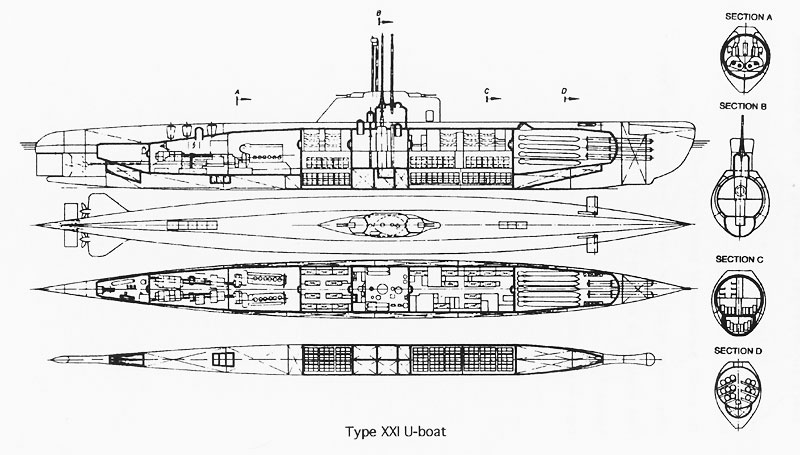 U.S. Navy diagram of a Type XXI U-boat. Note the teardrop-shaped fairing for the large hydrophone array beneath the bow and the figure-eight pressure hull. The large sonar array and its housing did slow the boat down, but its placement and size allowed for a very sensitive system to be installed, and gave it near-360 degree coverage around the submarine.

The FuMB Ant 3 Bali radar detector and antenna was located on top of the snorkel head.

The Type XXI boats were fitted with the FuMO 65 Hohentwiel U1 with the Type F432 D2 radar transmitter.

U-2511 and U-3008 were the only Type XXIs used for war patrols, and neither sank any ships. The commander of U-2511 claimed the U-boat had a British cruiser in her sights on 4 May when news of the German cease-fire was received. He further claimed she made a practice attack before leaving the scene undetected.

During 1957, U-2540, which had been scuttled at the end of the war, was raised and refitted as research vessel Wilhelm Bauer of the Bundesmarine. It was operated by both military and civilian crews for research purposes until 1982. During 1984, it was made available for display to the public by the Deutsches Schiffahrtsmuseum (German Maritime Museum) in Bremerhaven, Germany.

U-2518 became French submarine Roland Morillot. It was used for active service during the Suez Crisis in 1956, and remained in commission until 1967. It was scrapped in 1969.

Four Type XXI boats were assigned to the USSR by the Potsdam Agreement; these were U-3515, U-2529, U-3035, and U-3041, which were commissioned into the Soviet Navy as B-27, B-28, B-29, and B-30 (later B-100) respectively. However, Western intelligence believed the Soviets had acquired several more Type XXI boats; a review by the U.S. Joint Intelligence Committee for the Joint Chiefs of Staff during January 1948 estimated the Soviet Navy then had 15 Type XXIs operational, could complete construction of 6 more within 2 months, and could build another 39 within a year and a half from prefabricated sections, since several factories producing Type XXI components and the assembly yard at Danzig had been captured by the Soviets at the end of World War II. U 3538 — U 3557 (respectively TS-5 – TS-19 and TS-32 – TS-38) remained incomplete at Danzig and were scrapped or sunk during 1947. The four boats assigned by Potsdam were used in trials and tests until 1955, then scuttled or used for weapon testing between 1958 and 1973. The Type XXI design formed the basis for several Soviet design projects, Projects 611, 613, 614, 633, and 644. These became the submarine classes known by their NATO codes as Zulu, Whiskey and Romeo submarine classes.

The U-3017 was commissioned into the Royal Navy as HMS N41. It was used for tests until being scrapped during November 1949.

The only boat to survive intact is Wilhelm Bauer (ex-U-2540). The wrecks of other Type XXI boats are known to exist. During 1985, it was discovered that the partially scrapped remains of U-2505, U-3004, and U-3506 were still in the partially demolished “Elbe II” U-boat bunker in Hamburg. The bunker has since been filled in with gravel, although even that did not initially deter many souvenir hunters who measured the position of open hatches and dug down to them to allow the removal of artifacts.  The wrecks now lie beneath a car park (parking lot), making them inaccessible.

U-2513 lies in 213 feet (65 m) of water 70 nautical miles (130 km) west of Key West, Florida. The boat has been visited by divers, but the depth makes this very difficult and the site is considered suitable for only advanced divers. Four other boats lie off the coast of Northern Ireland, where they were sunk during 1946 as part of Operation Deadlight. Both U-2511 and U-2506 were found by nautical archaeologist Innes McCartney during his Operation Deadlight expeditions between 2001 and 2003. Both were found to be in remarkably good condition. In April 2018 the wreck of U-3523 was found North of Skagen in Denmark.

The Type XXI design directly influenced advanced post-war submarines, the Greater Underwater Propulsion Power Program (GUPPY) improvements to the United States Gato-, Balao-, and Tench-class submarines and the Soviet submarine projects designated by NATO as the Whiskey, Zulu and Romeo classes. The Chinese built Romeo-class submarines were based on Soviet-supplied designs. The subsequent Ming class, some of which were still in operation during 2013, was based on the Romeo.

The final resting place of three German U-boats, nicknamed “Hitler’s lost fleet”, has been found at the bottom of the Black Sea. 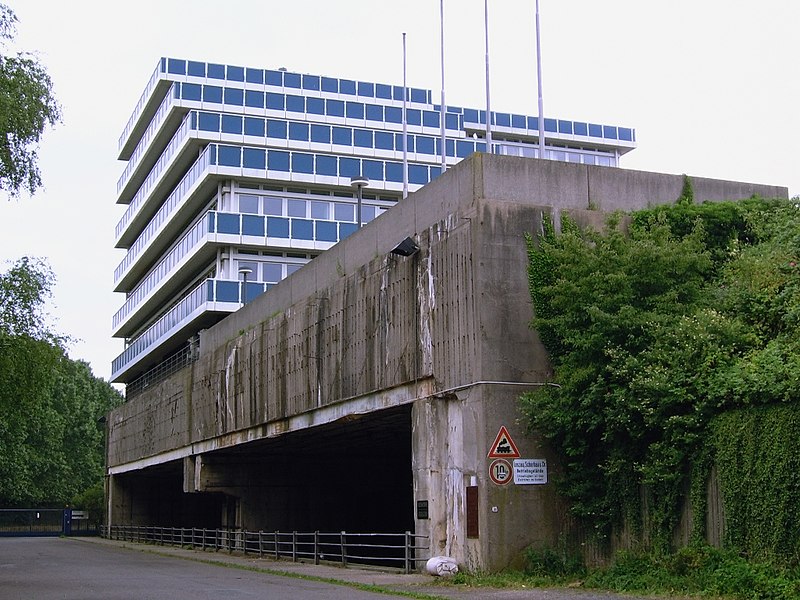