Operation Weserübung (German: [ˈveːsɐˌʔyːbʊŋ]) was the code name for Germany‘s assault on Denmark and Norway during the Second World War and the opening operation of the Norwegian Campaign. The name comes from the German for Operation Weser-Exercise (Unternehmen Weserübung), the Weser being a German river. In the early morning of 9 April 1940 (Wesertag; “Weser Day”), Germany invaded Denmark and Norway, ostensibly as a preventive manoeuvre against a planned, and openly discussed, Franco-British occupation of Norway. After the invasions, envoys of the Germans informed the governments of Denmark and Norway that the Wehrmacht had come to protect the countries’ neutrality against Franco-British aggression. Significant differences in geography, location and climate between the two nations made the actual military operations very dissimilar. 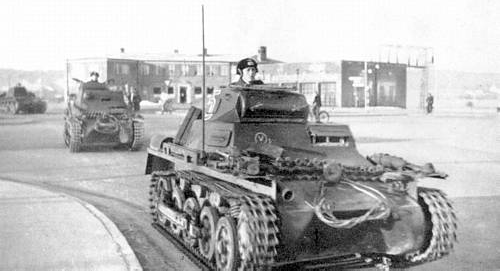 Strategically, Denmark’s importance to Germany was as a staging area for operations in Norway, and of course as a border nation to Germany which would have to be controlled in some way. Given Denmark’s position to the Baltic Sea the country was also crucial for the control of naval and shipping access to major German and Soviet harbours.

At 04:00 on 9 April 1940, the German ambassador to Denmark—Cecil von Renthe-Fink—called the Danish Foreign Minister Peter Munch and requested a meeting with him. When the two men met 20 minutes later, Renthe-Fink declared that German troops were at that moment moving in to occupy Denmark to protect the country from Franco-British attack. The German ambassador demanded that Danish resistance cease immediately and contact be made between Danish authorities and the German armed forces. If the demands were not met, the Luftwaffe would bomb the capital, Copenhagen. 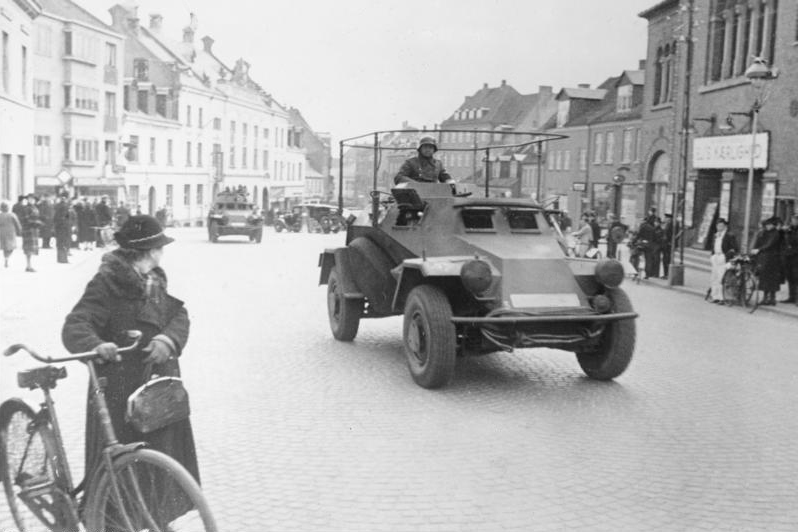 As the German demands were communicated, the first German advances had already been made, with forces landing by ferry in Gedser at 03:55 and moving north. German Fallschirmjäger units had made unopposed landings and taken two airfields at Aalborg, the Storstrøm Bridge as well as the fortress of Masnedø, the latter being the first recorded attack in the world made by paratroopers.

At 04:20 local time, a reinforced battalion of German infantrymen from the 308th Regiment landed in Copenhagen harbour from the minelayer Hansestadt Danzig, quickly capturing the Danish garrison at the Citadel without encountering resistance. From the harbour, the Germans moved toward Amalienborg Palace to capture the Danish royal family. By the time the invasion forces arrived at the king’s residence, the King’s Royal Guard had been alerted and other reinforcements were on their way to the palace. The first German attack on Amalienborg was repulsed, giving Christian X and his ministers time to confer with the Danish Army chief General Prior. As the discussions were ongoing, several formations of Heinkel He 111 and Dornier Do 17 bombers roared over the city dropping OPROP! leaflets.

Danish troops at Bredevad on the morning of the German attack. Two of these soldiers were killed in action later that day.

Faced with the explicit threat of the Luftwaffe bombing the civilian population of Copenhagen, and only General Prior in favour of continuing to fight, King Christian X and the entire Danish government capitulated at approximately 06:00 in exchange for retaining political independence in domestic matters.

The invasion of Denmark lasted less than six hours and was the shortest military campaign conducted by the Germans during the war. The rapid Danish capitulation resulted in the uniquely lenient occupation of Denmark, particularly until the summer of 1943, and in postponing the arrest and deportation of Danish Jews until nearly all of them were warned and on their way to refuge in Sweden. In the end, 477 Danish Jews were deported, and 70 of them lost their lives, out of a pre-war total of Jews and half-Jews at a little over 8,000.

The operation’s military headquarters was Hotel Esplanade in Hamburg, where orders were given to, among others, the air units involved in the invasion.

Norway was important to Germany for two primary reasons: as a base for naval units, including U-boats, to harass Allied shipping in the North Atlantic, and to secure shipments of iron-ore from Sweden through the port of Narvik. The long northern coastline was an excellent place to launch U-boat operations into the North Atlantic to attack British commerce. Germany was dependent on iron ore from Sweden and was worried, with justification, that the Allies would attempt to disrupt those shipments, 90% of which originated from Narvik.

The invasion of Norway was given to the XXI Army Corps under General Nikolaus von Falkenhorst and consisted of the following main units:

The initial invasion force was transported in several groups by ships of the Kriegsmarine: The German landing sites during the initial phase of Operation Weserübung. Map of Oslofjord with Oscarsborg

In the far north, Norwegian, French and Polish troops—supported by the Royal Navy and the Royal Air Force (RAF)—fought against the Germans over the control of the Norwegian harbour Narvik, important for the year-round export of Swedish iron ore. The Germans were driven out of Narvik on 28 May, but due to the deteriorating situation on the European continent, the Allied troops were withdrawn in Operation Alphabet – and the Germans recaptured Narvik on 9 June, by then also deserted by the civilians due to massive Luftwaffe bombing.

Encircling of Sweden and Finland Iron ore is extracted in Kiruna and Malmberget and brought by rail to the harbours of Luleå and Narvik. (Borders 1920–1940)

Operation Weserübung (Unternehmen Weserübung) did not include a military assault on (neutral) Sweden because there was no need . By holding Norway, the Danish straits and most of the shores of the Baltic Sea, the Third Reich encircled Sweden from the north, west and south – and in the East, there was the Soviet Union, the successor of Sweden’s and Finland’s arch-enemy Russia, on friendly terms with Hitler under the terms of the Molotov–Ribbentrop Pact. A small number of Finnish volunteers helped the Norwegian Army against Germans in an ambulance unit.

Swedish and Finnish trade was dependent on the Kriegsmarine and Germany put pressure on neutral Sweden to permit transit of military goods and soldiers on leave. On 18 June 1940, an agreement was reached. Soldiers were to travel unarmed and not be part of unit movements. A total of 2.14 million German soldiers and more than 100,000 German military railway carriages, crossed Sweden until this traffic was suspended on 20 August 1943.

On 19 August 1940, Finland agreed to grant access to its territory for the Wehrmacht, with the agreement signed on 22 September. Initially for transit of troops and military equipment to and from northernmost Norway but soon also for minor bases along the transit road that eventually would grow in preparation for Operation Barbarossa.

The heavy cruiser Admiral Hipper landing troops in Norway in 1940.

The 1941 Anglo-Soviet invasion of Iran, and the 1940 German invasion of Norway have been argued to be preemptive, with the German defense in the Nuremberg trials in 1946 arguing that Germany was “compelled to attack Norway by the need to forestall an Allied invasion and that her action was therefore preemptive.” The German defence was to attempt to refer to Plan R 4 and its predecessors. However it was determined that Germany had discussed invasion plans as early as 3 October 1939 when in a memo from Admiral Raeder to Alfred Rosenberg whose subject was “gaining bases in Norway.” had begun by asking questions such as “Can bases be gained by military force against Norway’s will, if it is impossible to carry this out without fighting?” Norway was vital to Germany as a transport route for iron ore from Sweden, a supply that the United Kingdom was determined to stop. One British plan was to go through Norway and occupy cities in Sweden. An Allied invasion was ordered on 12 March, and the Germans intercepted radio traffic setting 14 March as deadline for the preparation. Peace in Finland interrupted the Allied plans.

Two diary entries by Jodl dated 13 and 14 March did not indicate any high level awareness of the Allied plan although they do show that Hitler was actively considering putting Operation Weserübung into operation: The first said “Fuehrer does not give order yet for ‘Weser Exercise’. He is still looking for an excuse.” and the second “Fuehrer has not yet decided what reason to give for Weser Exercise.” It was not till 2 April 1940 that German preparations were completed and the Naval Operational Order for Weserübung was issued on 4 April 1940. The new Allied plans were Wilfred and Plan R 4. The plan was to provoke a German reaction by laying mines in Norwegian waters, and once Germany showed signs of taking action UK troops would occupy Narvik, Trondheim, and Bergen and launch a raid on Stavanger to destroy Sola airfield. However “the mines were not laid until the morning of 8 April, by which time the German ships were advancing up the Norwegian coast.” The International Military Tribunal at Nuremberg determined that no Allied invasion was imminent, and therefore rejected the German argument that Germany was entitled to attack Norway.