Morris Cohen (July 2, 1910 – June 23, 1995), also known by his alias Peter Kroger, was an Jewish-American convicted of espionage for the Soviet Union. His wife Lona was also an agent.

Harry Gold (December 11, 1910 – August 28, 1972) was a laboratory chemist and spy for a number of Soviet spy rings operating in the United States during the Manhattan Project.

Harry Gold was born on December 11, 1910, in Bern, Switzerland to Samson and Celia Gold. When he was 4, his famiy immigrated to the United States. During that process, the family’s surname was changed from Golodnitsky to Gold. The Golds lived in Chicago for a year before moving, Samson going to Virginia and Celia taking Harry to Philadelphia. Soon, Samson moved to Philadelphia as well, and took up a job as a cabinetmaker at the Victor Talking Machine Company in Camden, New Jersey. In 1917, Gold’s mother gave birth to another son, and the family was described by many as quiet and stand-offish. Gold later described his childhood as happy and secure, and his intellectual appetite was insatiable. However, the injustices that both Gold and the members of his family faced due to their race and status left Gold with a tremendous resentment and an overwhelming desire to fight prejudice. Unfortunately, during these formative years in which he developed many insecurities, Gold developed an almost puppy-like eagerness to please, and would “literally do anything for his friends”. He developed a pronounced interest in chemistry and graduated from South Philadelphia High School in 1929.

After his high school graduation, Gold was offered a job by one of his father’s acquaintances at Giftcrafters, a woodworking firm in the Kensington section of the city. He did not want the life that his father lived, with the hard physical labor and blatant anti-Semitism that came along with it.

David Greenglass (March 2, 1922 – July 1, 2014) was an atomic spy for the Soviet Unionwho worked on the Manhattan Project. He was briefly stationed at the Clinton Engineer Works uranium enrichment facility at Oak Ridge, Tennessee, and then worked at the Los Alamos laboratory in New Mexico from August 1944 until February 1946.

He provided testimony that helped convict his sister and brother-in-law Ethel and Julius Rosenberg, who were executed for their spying activity. Greenglass served nine and a half years in prison.

Greenglass was born in 1922 in the Lower East Side of Manhattan in New York City. His parents, Barnet and Tessie, were Jewish immigrants from Russia and Austria, respectively. He attended Haaren High School, and graduated in 1940. He attended Brooklyn Polytechnic Institute but did not graduate

Theodore Alvin Hall (October 20, 1925 – November 1, 1999) was an American physicistand an atomic spy for the Soviet Union, who, during his work on US efforts to develop the first and second atomic bombs during World War II (the Manhattan Project), gave a detailed description of the “Fat Man” plutonium bomb, and of several processes for purifying plutonium, to Soviet intelligence. His brother, Edward N. Hall, was a rocket scientist who worked on intercontinental ballistic missiles for the United States government. 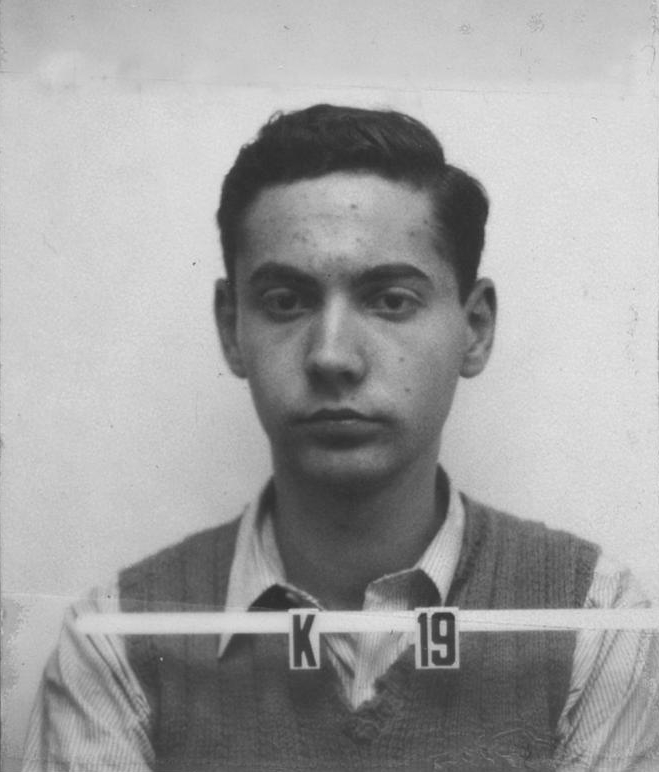 Theodore Alvin Holtzberg was born in Far Rockaway, New York City to a devout Jewish couple, Barnett Holtzberg and Rose Moskowitz. His father was a furrier, and the Great Depression affected his business significantly. When his father’s business became unable to support the household, the family moved to Washington Heights in Upper Manhattan. 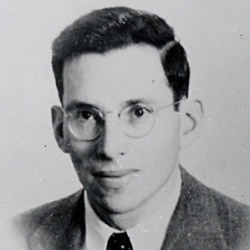 listen), Zhorzh Abramovich Koval, December 25, 1913 – January 31, 2006) was an American who acted as a Soviet intelligence officer for the Soviet atomic bomb project. According to Russian sources, Koval’s infiltration of the Manhattan Projectas a GRU (Soviet military intelligence) agent “drastically reduced the amount of time it took for Russia to develop nuclear weapons.”

Koval was born to Russian Jewish immigrants in Sioux City, Iowa. As an adult, he traveled with his parents to the Soviet Union to settle in the Jewish Autonomous Region near the Chinese border. Koval was recruited by the Soviet GRU (military intelligence), trained, and assigned the code name DELMAR. He returned to the United States in 1940 and was drafted into the U.S. Army in early 1943. Koval worked at atomic research laboratories and, according to the Russian government, relayed back to the Soviet Union information about the production processes and volumes of the polonium, plutonium, and uraniumused in American atomic weaponry, and descriptions of the weapon production sites. In 1948, Koval left on a European vacation but never returned to the United States. In 2007 Russian President Vladimir Putin posthumously awarded Koval the Hero of the Russian Federation decoration for “his courage and heroism while carrying out special missions”.

Other convicted co-conspirators were imprisoned, including Ethel’s brother, David Greenglass, who supplied documents from Los Alamos to Julius and who served 10 years of a 15-year sentence; Harry Gold, who identified Greenglass and served 15 years in federal prison as the courier for Greenglass. Klaus Fuchs, a German scientist working in Los Alamos and handled by Gold, provided vastly more important information to the Soviets. He was convicted in Great Britain and served nine years and four months in prison.

For decades, the Rosenbergs’ sons Michael and Robert Meeropol and many other defenders maintained that Julius and Ethel were innocent of spying on their country and victims of Cold War paranoia. After the fall of the Soviet Union, much information concerning them was declassified, including a trove of decoded Soviet cables, code-named VENONA, which detailed Julius’s role as a courier and recruiter for the Soviets and Ethel’s role as an accessory. Their sons’ current position is that Julius was legally guilty of the conspiracy charge, though not of atomic spying, while Ethel was only generally aware of his activities. The children say that their father did not deserve the death penalty and that their mother was wrongly convicted. They continue to campaign for Ethel to be posthumously and legally exonerated.

In 2014, five historians who had published works based on the Rosenberg case wrote that Soviet documents show that Ethel Rosenberg hid money and espionage paraphernalia for Julius, served as an intermediary for communications with his Soviet intelligence contacts, provided her personal evaluation of individuals Julius considered recruiting, and was present at meetings with his sources.

They also demonstrate that Julius reported to the KGB that Ethel persuaded Ruth Greenglass to travel to New Mexico to recruit David as a spy.

Julius Rosenberg was born on May 12, 1918, in New York City to a family of Jewishimmigrants. The family moved to the Lower East Side by the time Julius was 11. His parents worked in the shops of the Lower East Side, as Julius attended Seward Park High School. Julius became a leader in the Young Communist League USA while at City College of New York (CCNY). In 1939, he graduated from CCNY with a degree in electrical engineering.

Ethel Greenglass was born on September 25, 1915, to a Jewish family in Manhattan, New York City. She originally was an aspiring actress and singer, but eventually took a secretarial job at a shipping company. She became involved in labor disputes and joined the Young Communist League, where she met Julius in 1936. They married in 1939.  Together they had two sons, Michael and Robert, born in 1943 and 1947 respectively.

Saville Sax (July 26, 1924 – September 25, 1980) was the Harvard College roommate of Theodore Hall who recruited Hall for the Soviets and acted as a courier to move the atomic secrets from Los Alamos to the Soviets.

Saville Sax was born in New York City on July 26, 1924 and went by the name of Sarry Sax. He was the son of Bernard Sax (1896–1936) and Bluma Sax (1895–1986). Bluma and Bernard were both born in Russia, of Jewish ancestry. In 1930 they were living in Manhattan with their grandfather Jacob Sax (1874–?). Saville was introduced to Soviet agents by his mother, Bluma, who worked for a Communist front organization called Russian War Relief. Sax went by the cover name “Oldster,” and periodically traveled to New Mexico to collect information from Hall. Saville had a son, Boria Sax, a daughter, Sarah Sax, and a sister, Anne Saville Arenberg. (1925-1967). After drifting from job to job, Saville ended up teaching “values clarification” in a Great Society funded education program called NEXTEP, when he was “something of an adult hippie, disheveled in his personal habits and given to LSD and other hallocinogenic drugs” and “openly boasted of his role in the [atomic] spying.”  He died on September 25, 1980 in Edwardsville, Illinois.

Morton Sobell (born April 11, 1917) is an American former engineer with General Electricand Reeves Electronics who worked on military and government contracts and who was subsequently found guilty of spying for the Soviets as a part of a ring that included ((( Julius Rosenberg ))) and others. Sobell was tried and convicted of espionage in 1951 and sentenced to 30 years in prison. He was released in 1969 after spending 17 years and 9 months in prison. 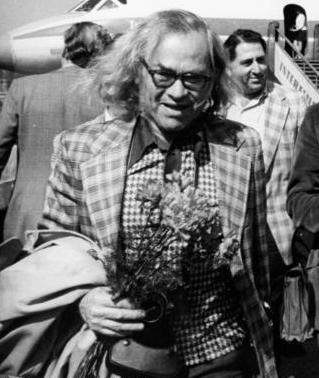 Morton Sobell was born into a Jewish family in New York City, to parents Louis and Rose, who in 1906 emigrated from the small village of Belozerka, Russian Empire (today in Ukraine). He attended Stuyvesant High School and the City College of New York where he received a degree in engineering and later married Helen Levitov (1918–2002).

He worked in Washington, D.C., for the Navy Bureau of Ordnance and in Schenectady, New York, for the General Electric Company. 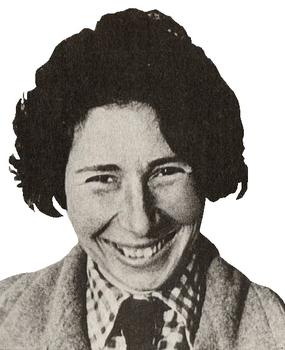 Ursula Kuczynski (15 May 1907, Schöneberg, Prussia, German Empire – 7 July 2000, Berlin, Germany, also known as Ruth Werner, Ursula Beurton and Ursula Hamburger) was a Jewish Communist activist who worked for the Soviet Union in the 1930s and 1940s as a spy, most famously as the handler of nuclear scientist Klaus Fuchs. She moved to East Germany in 1950 when Fuchs was unmasked, and published a series of books related to her spy work, including her bestselling autobiography, Sonjas Rapport.

Sources concerned with her espionage work in the 1930s/40s sometimes use the cover name originally suggested to her in Shanghai by her fellow intelligence operative, Richard Sorge: “Sonja”, “Sonja Schultz” or, after she moved to Britain, “Sonya”.

From 1943 she also worked as a courier for the USSR’s “Atomic spies“, Klaus Fuchs  and Melita Norwood. Agent Sonya thus hastened the development of the Soviet atomic bomb, successfully tested in 1949. In addition to the (retrospectively) high-profile spies Fuchs and Norwood, Sonya was the GRU handler for (among others) an officer of the British Royal Air Force and a British specialist in submarine radar. She was also able to pass to her Soviet employers information from her brother, her father, and other exiled Germans in England. It was, indeed, her brother Jürgen Kuczynski, an internationally respected economist, who originally recruited Klaus Fuchs to spy for the Soviets at the end of 1942.