In July 2016, an arbitration tribunal constituted under Annex VII of the United Nations Convention on the Law of the Sea (UNCLOS) ruled against the PRC’s maritime claims in Philippines v. China. The People’s Republic of China and the Republic of China (Taiwan) stated that they did not recognise the tribunal and insisted that the matter should be resolved through bilateral negotiations with other claimants. However, the tribunal did not rule on the ownership of the islands or delimit maritime boundaries.

Territorial claims in the South China Sea (based on outdated / unofficial documents / maps). 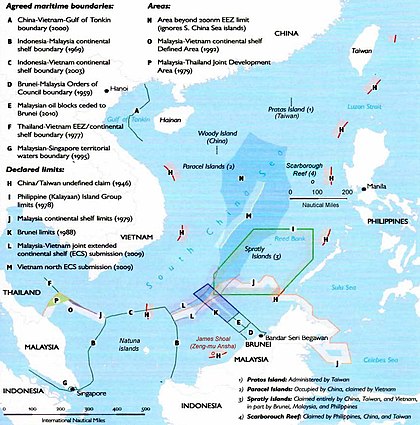 The disputes involve both maritime boundaries and islands. There are several disputes, each of which involves a different collection of countries: 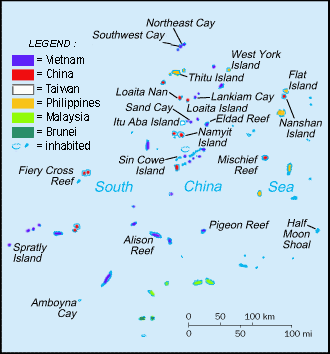 “Great Wall of Sand” is a name first used in March 2015 by US Admiral Harry Harris, who was commander of the Pacific Fleet, to describe a series of uniquely large-scale land reclamation projects by the People’s Republic of China (PRC) in the Spratly Islands area of the South China Sea in the period from late 2013 to late 2016.

Beginning in October 2015, as part of the U.S. FON Operations (FONOP) program, U.S. Navy ships have patrolled near the artificial islands China has created in the disputedSpratly archipelago to underscore the U.S.’s position that the artificial islands constructed by China are located in international waters. The guided-missile destroyer USS Lassen sailed within 12 nautical miles of reclaimed-land islands (the so-called “Great Wall of Sand“) in October 2015. Two other U.S. ships have followed: the USS Wilbur Curtis sailed within 12 nautical miles of Triton Island in the Paracel Islands in January 2016, and the USS William P. Lawrence came within 12 nautical miles of Fiery Cross Reef in the Spratly Islands in May 2016.

In spring 2017, the Trump administration stopped FON in the South China Sea hoping China might increase its pressure on North Korea that is launching missile tests.

In summer 2017, it restarted FON Operations.

In May 2017, Japan sent its Izumo helicopter carrier on a three-month tour of the South China Sea, marking Japan’s biggest foray into the region since the Second World War.

In April 2018, three Australian naval vessels transited the South China Sea towards Vietnam and, along the way, met a ‘robust’ challenge from the Chinese navy.

At the June 2018 Shangri-La Dialogue, ministers from France and the UK jointly announced that their ships would sail through the South China Sea to continue to uphold the collective right to freedom of navigation. The announcement came after the UK and France announced separately in July 2017 and May 2018 respectively that they would increase their involvement in the South China Sea