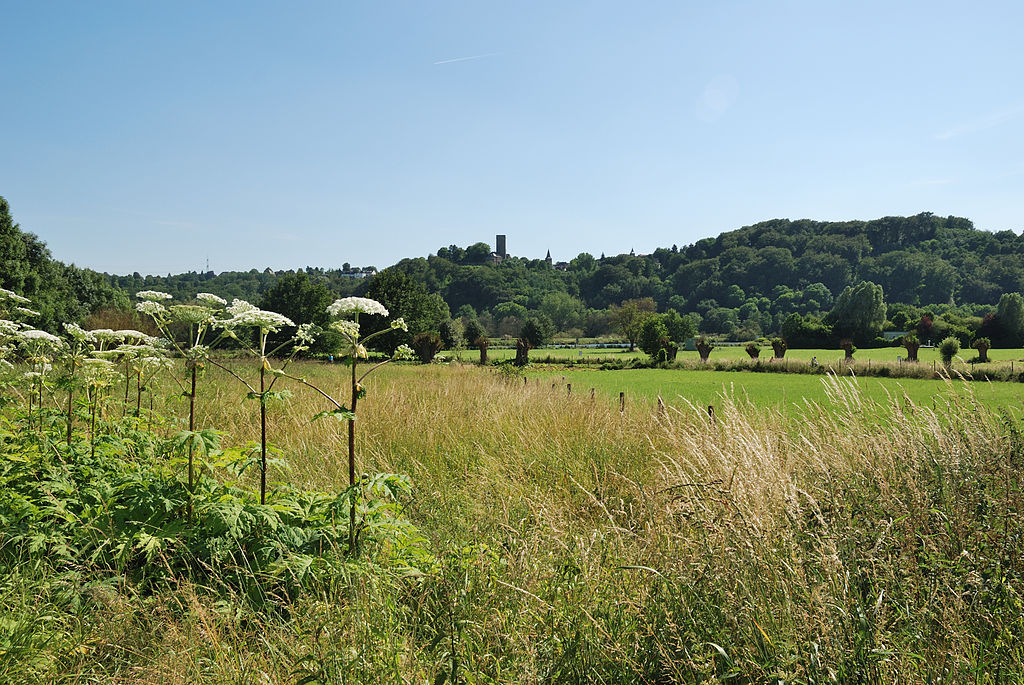 An invasive species is a species that is not native to a specific location (an introduced species), and that has a tendency to spread to a degree believed to cause damage to the environment, human economy or human health. The criteria for invasive species has been controversial, as widely divergent perceptions exist among researchers as well as concerns with the subjectivity of the term “invasive”. Several alternate usages of the term have been proposed. The term as most often used applies to introduced species (also called “non-indigenous” or “non-native”) that adversely affect the habitats and bioregions they invade economically, environmentally, or ecologically. Such invasive species may be either plants or animals and may disrupt by dominating a region, wilderness areas, particular habitats, or wildland–urban interface land from loss of natural controls (such as predators or herbivores). This includes non-native invasive plant species labeled as exotic pest plants and invasive exotics growing in native plant communities. It has been used in this sense by government organizations as well as conservation groups such as the International Union for Conservation of Nature (IUCN) and the California Native Plant Society. The European Union defines “Invasive Alien Species” as those that are, firstly, outside their natural distribution area, and secondly, threaten biological diversity.

The term is also used by land managers, botanists, researchers, horticulturalists, conservationists, and the public for noxious weeds. The kudzu vine (Pueraria lobata), Andean pampas grass (Cortaderia jubata), and yellow starthistle (Centaurea solstitialis) are examples. An alternate usage broadens the term to include indigenous or “native” species along with non-native species, that have colonized natural areas (p. 136). Deer are an example, considered to be overpopulating their native zones and adjacent suburban gardens, by some in the Northeastern and Pacific Coast regions of the United States. Sometimes the term is used to describe a non-native or introduced species that has become widespread (p. 136). However, not every introduced species has adverse effects on the environment. A nonadverse example is the common goldfish (Carassius auratus), which is found throughout the United States, but rarely achieves high densities (p. 136). Notable examples of invasive species include European rabbits, grey squirrels, domestic cats, carp and ferrets.

Dispersal and subsequent proliferation of species is not solely an anthropogenic phenomenon. There are many mechanisms by which species from all Kingdoms have been able to travel across continents in short periods of time such as via floating rafts, or on wind currents. Charles Darwin performed many experiments to better understand long distance seed dispersal, and was able to germinate seeds from insect frass, faeces of waterfowl, dirt clods on the feet of birds, all of which may have traveled significant distances under their own power, or be blown off course by thousands of miles.

Invasion of long-established ecosystems by organisms from distant bio-regions is a natural phenomenon, which has likely been accelerated via hominid-assisted migration although this has not been adequately directly measured.

The definition of “native” is controversial in that there is no way to precisely determine nativity. For example, the ancestors of Equus ferus (modern horses) evolved in North America and radiated to Eurasia before becoming locally extinct. Upon returning to North America in 1493 during their hominid-assisted migration, it is debatable as to whether they were native or exotic to the continent of their evolutionary ancestors. 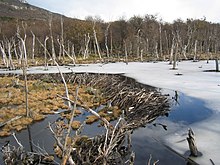 Beavers from North America constitute an invasive species in Tierra del Fuego, where they have a substantial impact on landscape and local ecology through their dams.

Vinca spreading along a border 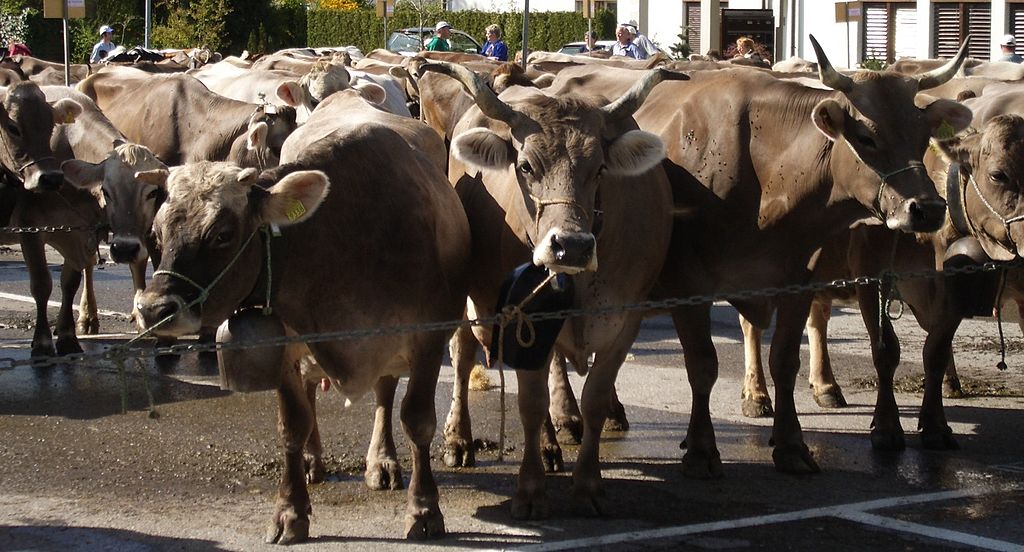 An introduced species (alien species, exotic species, non-indigenous species, or non-native species) is a species living outside its native distributional range, but which has arrived there by human activity, either deliberate or accidental. Non-native species can have various effects on the local ecosystem. Introduced species that become established and spread beyond the place of introduction are called invasive species. The impact of introduced species is highly variable. Some have a negative effect on a local ecosystem, while other introduced species may have no negative effect or only minor impact. Some species have been introduced intentionally to combat pests. They are called biocontrols and may be regarded as beneficial as an alternative to pesticides in agriculture for example. In some instances the potential for being beneficial or detrimental in the long run remains unknown.

The effects of introduced species on natural environments have gained much scrutiny from scientists, governments, farmers and others. 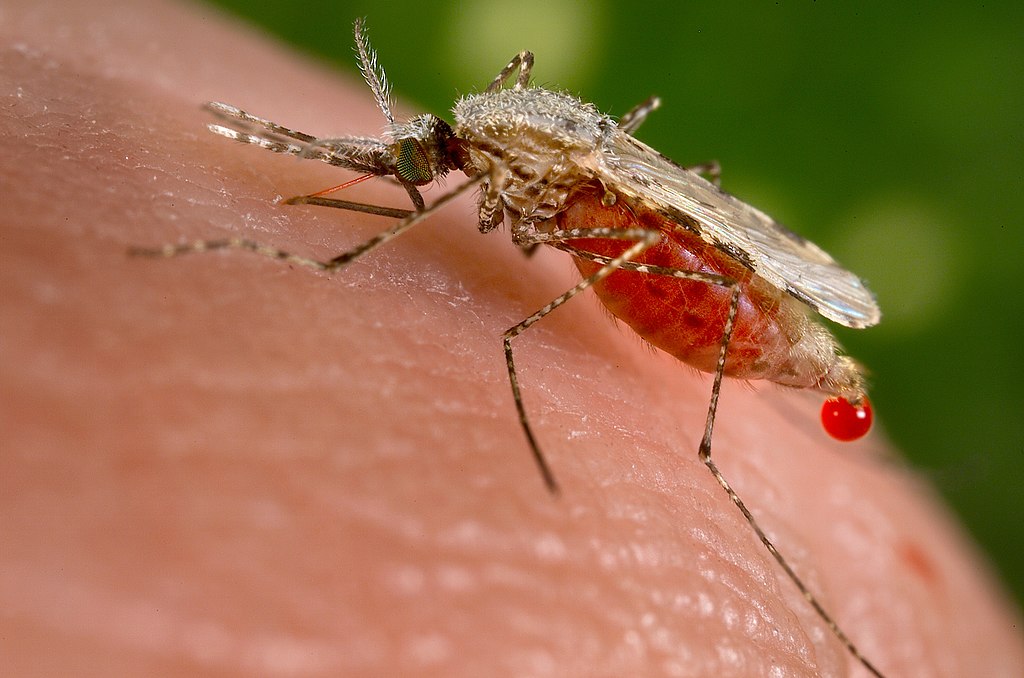 In conservation biology, invader potential is the qualitative and quantitative measure of a given invasive species probability to invade a given ecosystem. Exotic species with high invader potential are ones with high tolerance of different climates, dissolved oxygen content (for aquatic organisms), high propagule pressure and species with a large number of individuals introduced. The last factor is called a transport vector, for instance, sea lampreys and zebra mussels were transported into the Great Lakes through the vector of ballast water in ships. Transport vector is one of the most important factors, because if a large enough number of individuals are transported to an area that they cannot thrive in, a mutation within that population to thrive in the new ecosystem is more likely.

Most invaders are adapted to disturbed areas, so ecosystems that have been disrupted or roadside ditches are susceptible to invasion.

Climate matching is one of the most common measures of invader potential. Mostly exotic species that have already exhibited invasive traits are studied.

Biotic resistance is a controversial concept in invader potential. Small scale studies have borne the concept of diversity resistance, that diverse ecosystems resist invasions better than less diverse ecosystems. However, evidence on regional scales finds a positive correlation between diversity and number of invasions. The exact interpretation of these studies is unclear.

One or the Other