The Entwicklung series (from German Entwicklung, “development”), more commonly known as the E-Series, was a late-World War II attempt by Germany to produce a standardised series of tank designs. There were to be standard designs in six different weight classes,(E-5,E-10,E-25,E-50,E-75 and E-100) from which several specialised variants were to be developed. This intended to reverse the trend of extremely complex tank designs that had resulted in poor production rates and mechanical unreliability.

The E-series designs were simpler, cheaper to produce and more efficient than their predecessors; however, their design offered only modest improvements in armour and firepower over the designs they were intended to replace, such as the Jagdpanzer 38(t), Panther Ausf.G or Tiger II; and would have represented the final standardization of German armoured vehicle design. Indeed, nearly all of the E-series vehicles — up through and including the E-75 — were intended to use what were essentially the Tiger II’s eighty centimeter diameter, steel-rimmed road wheels for their suspension, meant to overlap each other (as on the later production Tiger I-E and Panther designs that also used them), abandoning the interleaved Schachtellaufwerk roadwheel system that first appeared on German military half-tracks in the early 1930s. 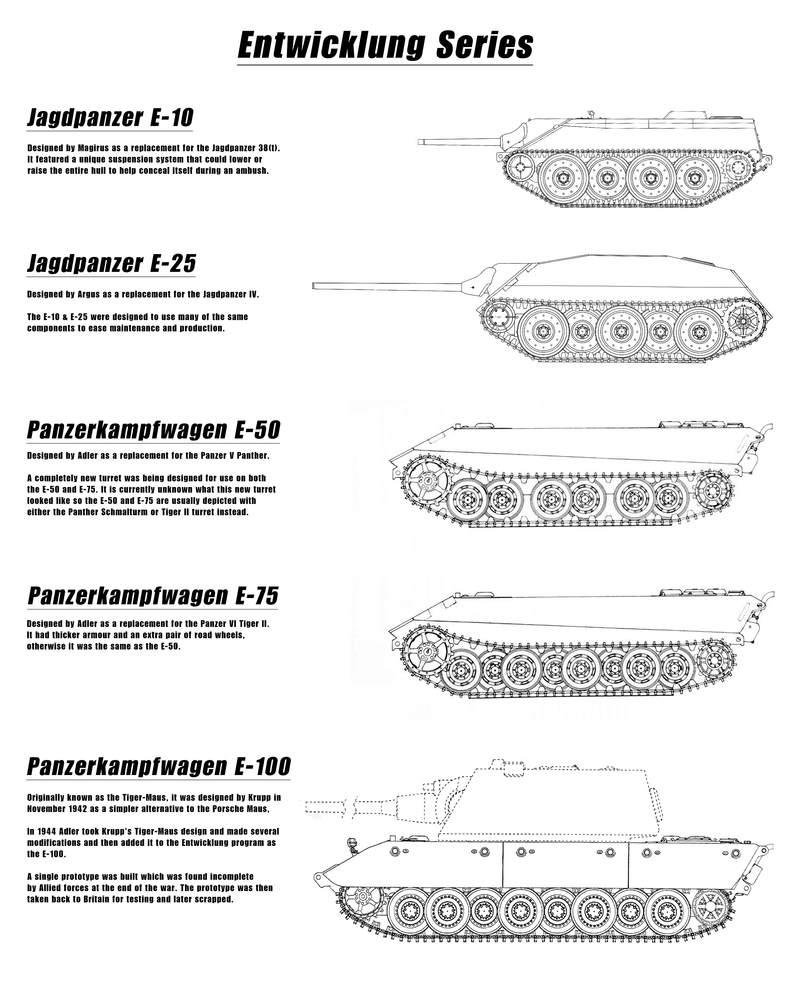 The E-5 was supposed to be 5-10 tonnes in weight and form the basis of a family of light tanks, reconnaissance vehicles, casemate-form turretless Jagdpanzer-style tank destroyers and armored personnel carriers. So far no evidence of this tank is found in primary sources, and is quite likely to be a purported design of potential post-war origin, or scale modelers.

Said to have been designed by the Klockner-Humboldt-Deutz Magirus AG firm in Ulm, the E-10 (Development name – “Hetzer”) project was developed as a replacement of the Jagdpanzer 38(t). The designs based on this new chassis would all be in the 10 to 25 tonnes weight class, and using only four Tiger II-style but larger all-steel road wheels per side in an overlapping layout for its main “slack-track” suspension with no return rollers and a rear drive sprocket. Much simplified was the suspension, which was intended to be based on the concept of using conical-spring Belleville washers for the E-series AFVs as a whole. These were simply bolted on to the chassis and could be easily removed for repair or replacement. This suspension system was later used on the Swiss Panzer 61. A most interesting aspect was the ability to lower the hull by placing the pivot points of the suspension units higher in respect to the hull bottom; by not having torsion-bars occupying the entire hull planform in the lowermost interior areas of the hull, but via cranks driven by hydraulic actuators on the sides of the hull. This reduced the height of the vehicles from 176 cm to 140 cm.

The intention was to create several new light tank destroyers as a replacement for the Jagdpanzer 38(t), as well as a new family of Waffenträger armed with heavy anti-tank guns. However, the design was soon abandoned in favour of a redesigned and enlarged Jagdpanzer 38(t), using German parts as opposed to the Czech parts for the Jagdpanzer 38(t). This new design was called PzKpfw 38 D, of which the D stands for deutsch (“German”). Some sources spell this as PzKpfw 38(d), but this would have indicated a Danish design, not German.

The E-25 designs, in the 25-50 tonnes weight class, were to be the replacements of all Panzer III and Panzer IV based designs, with Alkett, Argus and Adler, with involvement of the Porsche firm. This family would include medium reconnaissance vehicles, medium Jagdpanzer and heavy Waffenträger, using five Tiger II style road wheels but larger per side in a similar overlapping layout to the lighter E-10 suspension, also with “slack-track” design and a rear drive sprocket. As main armament a 75mm Pak 42 L/70 was planned with a possible MG in a small turret , and is similar to the Hetzer tank destroyer. This tank would have been very maneuverable, and due to it’s low profile, hard to spot on the battlefield.

The E-50 Standardpanzer was intended as a standard medium tank, replacing the Panther and Tiger I and the conversions based on these tanks. The E-50 hull was to be longer than the Panther, in fact it was practically identical to the Königstiger (Tiger II) in overall dimensions except for the upper and lower glacis plate layout. Compared to these earlier designs however, the amount of drilling and machining involved in producing these Standardpanzer was reduced drastically, which would have made them quicker, easier and cheaper to produce, as would the proposed conical spring system, replacing their predecessors’ torsion bar system which required a special steel alloy.

As indicated by its name, the weight of the E-50 would fall between 50 and 75 tonnes. The engine was an improved Maybach HL234 which had 900 hp. Maximum speed was supposed to be 60 km/h.

The E-75 Standardpanzer was intended to be the standard heavy tank to be used as a replacement of the Tiger II and Jagdtiger. The E-75 would have been built on the same production lines as the E-50 for ease of manufacture, and the two vehicles were to share many components, including the same Maybach HL 234 engine. As its name indicates, the resulting vehicle would have weighed in at over 75 tonnes, reducing its speed to around 40 km/h. To offset the increased weight, the bogies were spaced differently from on the E-50, with an extra pair added on each side, giving the E-75 a slightly improved track to ground contact length.

According to some sources, the similarities between the E-50 and the E-75 went further; they were to be equipped with the same turret and 8.8 cm KwK 43 L/71 along with an optical rangefinder for increased long range accuracy. German scientists and engineers had successfully designed a Schmalturm, narrow-front turret and infra-red lighting and sights for use on the prototypes of the Panther Ausf. F as the war drew to a close.

The earliest ancestor of the E-100 was the Tiger-Maus. The Tiger-Maus was never built, but it was to use components from the Tiger II and the turret from the Maus.

The E-100 was to be a superheavy combat tank designed to be the replacement for the prototype-only, Porsche-designed Maus. Development and building of a prototype E-100 started in 1944 but was largely abandoned after Adolf Hitler ordered an end to the development of the Maus.

Only the chassis was finished. It was taken to the United Kingdom for evaluation purposes and eventually scrapped.

After the war, the French designed and built the AMX-50 series of armoured fighting vehicles, which used a 1000 hp Maybach engine with rear drive, as had been intended for the E-50 and E-75, whilst the idea of external Belleville washer suspension – which was also developed with the Entwicklung series in mind – resurfaced on the Swiss Panzer 61. 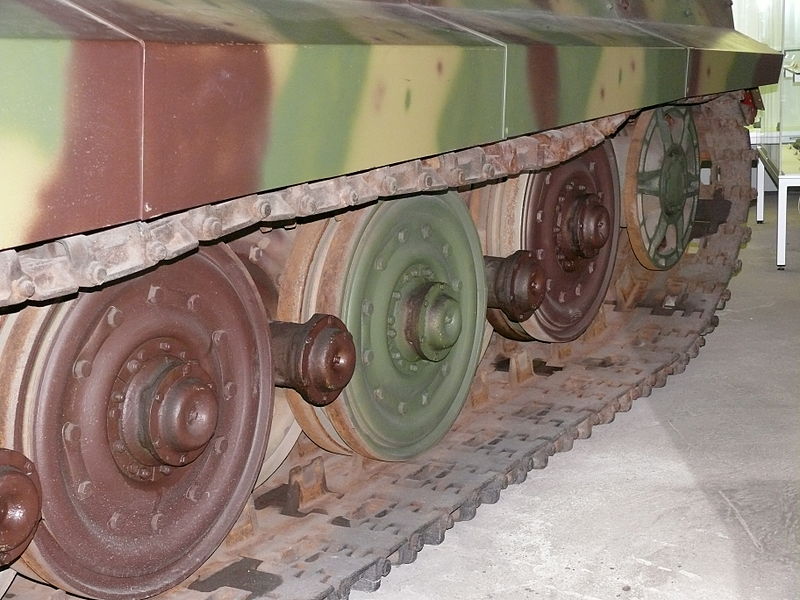 Closeup of a Tiger II’s 80 cm diameter roadwheels, meant to be standard on most E-series AFVs.

Development of the Panzer Arm to 1939