Skjoldenæsholm Castle is a manor house located 11 kilometres north-east of Ringsted, Denmark, standing on the west side of one of the many lakes which dominate the area. The Neoclassical main building, possibly by Philip de Lange, is now run as a hotel and conference centre while the grounds play host to both the Skjoldenæsholm Tram Museum and a golf course. The rest of the land is mostly forested. 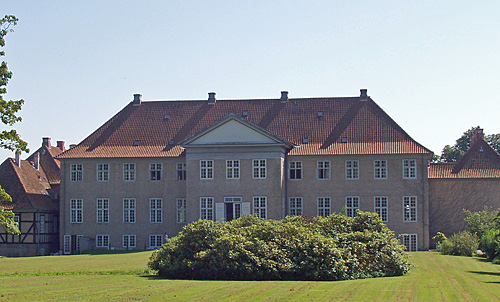 Originally located 1.5 km (0.93 mi) to the south of the current house, Skjoldenæs is first recorded in the 1340s when it was owned by the crown and referred to as a “castle of considerable size”. King Christopher II mortgaged the estate to John III, Count of Holstein-Plön. King Valdemar IV can with certainty be linked to the locale, in either 1346 or 1348, when he besieged the castle.

The medieval castle was demolished in 1567 but a castle bank surrounded by moats can still be seen at the site today. The estate was crown land for an extended period of time, held in fee by various members of the Danish nobility until 1662 when it was ceded to the King’s rentemester Henrik Müller. Over the next few years, between 1663 and 1666, Müller completed a new manor house, half-timbered and in one storey, at the site of the current main building.

After Müller’s death in 1682, the estate was reacquired by the king, Christian V, who the following year gave it to his half-brother Ulrik Frederik Gyldenløve, who also owned the Gyldenløve Mansion in Copenhagen as well as several other estates in Denmark and in Norway. After his death, Skjoldenæsjolm remained in his family for almost a century. Count Ferdinand Anton Danneskiold-Laurvig, Ulrik Frederik Gyldenløve’s son, owned the property from 1720 until his death in 1754. Anna Joachimine Danneskiold-Laurvig (née Ahlefeldt), the widow after his son, replaced the old main wing with the one seen today in 1766.

The main building was in 1971 converted into a conference centre. The estate covers 1,272 hectares (3,140 acres) of land, including Skjoldenæsholm Tramway Museum which was founded in 1978 and a golf course. The rest consists mainly of forest.

In 1998, the castle was setting for Thomas Vinterberg‘s film The Celebration, one of the central works of the Danish Dogme 95 group.

The sober Neoclassical main wing from 1766 stands in washed, yellow brick. The architect is not known but may have been Philip de Lange.

The oldest, timber-framed part of the building as seen from the east across the lake

Originally, the red hip roof also covered the three-bay median risalits, found on both sides of the main wing, which received their triangular pediment in connection with a major renovation in 1703. The renovation also added a new east wing and gave the old half-timbered west wing a new facade in masonry towards the courtyard, which matched it. The east wing is connected to a surviving part of Müller’s half-timbered timber framed house..