Sophienholm is a former country house and exhibition venue located north on the shore of Lake Bagsværd in Lyngby-Taarbæk Municipality in the northern outskirts of Copenhagen, Denmark.

The building was originally a country house built by Johan Theodor Holmskiold in 1769. Constantin Brun, its next owner, had it completely rebuilt at the turn of the 19th century into its present appearance, and it became a lively cultural venue during the Danish Golden Age when his wife, the writer and salonist Friederike Brun, played host to many prominent Danish and foreign cultural figures of the time. 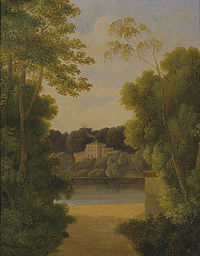 Sophienholm as it appeared after the rebuilding, painting by J. L. Lund

Sophienholm was built from 1767 to 1768 as a country retreat for Johan Theodor Holmskiold. Originally a medical doctor and naturalist, he had just begun a successful career at the Royal Court in Copenhagen and as a director for several prominent state enterprises. He named the house after his wife Sophie Holmskjold., and owned the property until 1790 when he built himself a new and larger country home nearby.

The new owner of Sophienholm was the merchant Constantin Brun. Originally from Germany, he had come to Denmark as royal administrator of trade in the Danish West Indies and made a fortune on trade during the early Napoleonic Wars, profiting from Denmark’s neutrality. At the turn of the century, he commissioned Joseph-Jacques Ramée to expand and completely redesign the building. Completed in 1805, Ramée’s project also redesigned the park and added several smaller buildings to the site, including a Norwegian house, a Chinese pavilion, a Swiss cottage and a gate house. Later two lateral wings were added to the main building.

Ida Brun putting a wreath on her mother’s bust

While the Bruns resided at Sophienholm, the estate developed into a lively cultural venue when the culturally inclined Frederikke used it for salons. An inspiration for this activity was Madame de Staël, a close friend from her travels who was famous for her salons at Château de Coppet. Frederikke Brun’s salons attracted a colourful mix of celebrated poets and poor and unknown students, composers, foreign diplomats, foreign artists of any kind, and even members of the royal family.

Contemporary memoires and letter literature provide a detailed image of how the salon life at Sophienhom unfolded. In the day time, the park was a popular venue for the house guests who would have tea or hot chocolate in the Norwegian House in the afternoon, sometimes also in the evening. Imported donkeys were used for excursions in the surrounding countryside. At dinner time, the guests were treated with food and wine “in abundance” and afterwards coffee was served in the Picture Room, located on the ground floor, facing the forest. Constantin Brun, who did not share Frederikke’s cultural inclination, would usually retire early, either to his private chambers or to a quiet corner to play cards and complain about his wife’s extravagance.

Besides general conversation, the entertainment included various literary and musical activities. Frederikke often read aloud letters from her many famous friends abroad, and guests entertained with recitations of poetry or musical performances.

A central part of the salon life was Ida Brun, Constantin and Friederike Brun’s oldest daughter. She had many prominent admirers both among the guests at Sophienholm and the prominent personages she met on travels with her parents around Europe, including Bertel Thorvaldsen in Rome. She performed at her mother’s soirés both with singing and attitudes, a cross between postures, dance and acting,which she had learned directly from their inventor, Lady Hamilton in Naples. When Ida Brun married Louis Philippe de Bombelles, the Austrian Ambassador to Denmark, and left the country, the salons at Sophienholm faded out.

After the Brun era

The Brun era ended in 1836 when Constantin and Friederikke Brun died within a few month of each other. Ida Brun inherited Sophienholm but immediately sold it. In 1882, the estate was bought by Carl Aller, founder of Carl Allers Etablissement, a fast expanding publishing house. Sophienholm stayed in hands of the Aller family until it was bought by Lyngby-Taarbæk Municipality in 1963. They renovated the building and opened it to the public as an exhibition building at the initiative of mayor Paul Fenneberg.

Sophienholm hosts 4–5 exhibitions a year. The park is used for concerts.