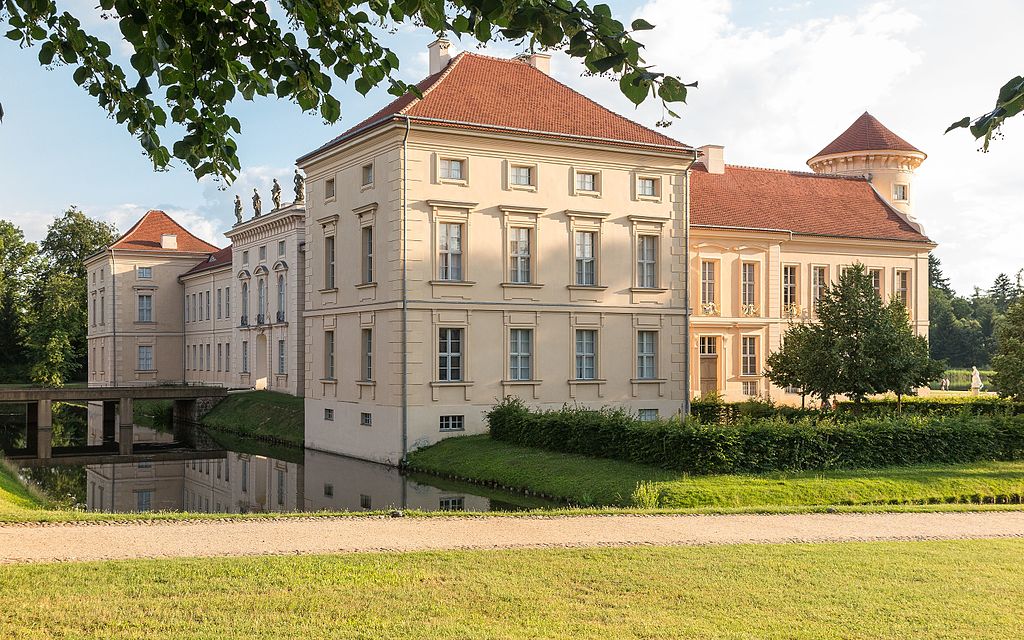 Rheinsberg Castle is located in the municipality of Rheinsberg, about 100 km northwest of Berlin in the district of Ostprignitz-Ruppin. Located on the east bank of Lake Grienerick, the castle is considered a textbook example of the so-called Friderician Rococo and also served as a model for Sanssouci Castle. 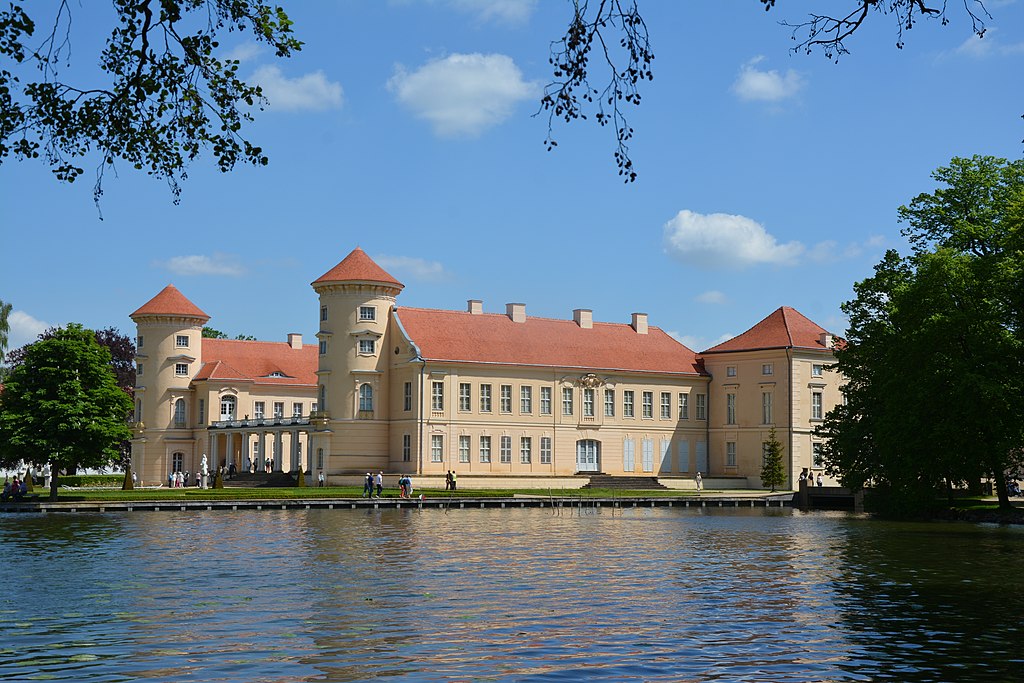 Where the Rheinsberg Castle is today stood, a water castle stood in the Middle Ages. The family of Bredow had married Rheinsberg in 1464 of the von Platen. In 1524 Rheinsberg came to the Mark Brandenburg with the reign of Ruppin. In 1566, those of Bredows built a water castle in Renaissance forms on the site of the water castle, which was severely damaged in the Thirty Years ‘ War. In 1618, the castle had already been sold to Kuno von Lochow.

After the extinction of the line, it fell to Elector Friedrich Wilhelm, who gave it to his general Franz du Hamel. With the permission of the Elector, however, he sold it to Benjamin Chevenix de Beville, who sold the property to the Prussian King Frederick William I for 75,000 talers in March 1734. Frederick William, on the other hand, gave it to his son Crown Prince Frederick, later King Frederick II, for his loyalty. In 1736, he moved with his wife, the Crown Princess Elisabeth Christine, to the southern wing of the castle. Between the years and 1740, Frederick had the castle extensively expanded and expanded by the builders Johann Gottfried Kemmeter and Georg Wenzeslaus von Knobelsdorff, who learned the architectural craft from Kemmeter. Thus, the single-storey building was supplemented by an upper floor and the east wing was extended by 25 metres. Friedrich himself always described his years at Rheinsberg Castle as the “happiest of his life.” Here he founded the first Masonic Lodge in Prussia. His time in Rheinsberg ended in 1740 with the accession to the throne.

Four years later, he gave it to his younger brother Heinrich, who moved in with his wife Princess Wilhelmine von Heses-Kassel in 1752 and lived there until his death. The art-loving prince set out to expand and beautify the castle and its accompanying park. In 1786, Georg Friedrich von Boumann and Carl Gotthard Langhans completed the castle according to the original plans. Langhans was already in Rheinsberg for a few weeks in 1766 and made designs for Prince Henry, which were implemented in the following years by his construction director Carl Wilhelm Hennert. Boumann built the two pavilions at the castle in 1785/86, which probably already tore up Langhans. The Rheinsberger Obelisk, built in the early 1790s on the opposite lakeside in the view axis of the castle, was intended to commemorate the brother August Wilhelm of Prussia, who fell out of his court for Frederick II, and who is close to many Henry and partly from the king. Also honoring little paid officers who had made a contribution in the Silesian wars. Already during his lifetime, Henry had his burial place built in the form of an aborted pyramid in the garden, where he was buried after his death in 1802. The French inscription was written by Henry himself.

The castle gained literary notoriety through Theodor Fontane in his wanderings through the Mark Brandenburg and the story Rheinsberg: A picture book for lovers by Kurt Tucholsky.
Until the expropriation in 1945, the castle and the estate belonged to the Hohenzollern House. In the German Democratic Republic, the castle housed a diabetic clinic. Today, the castle with its gardens is owned by the Prussian Castles and Gardens Berlin-Brandenburg.
After extensive and extensive restoration, the castle can now be visited again as a museum. It also houses the Kurt Tucholsky Literature Museum. The former Kavaliaide’s house has housed the Rheinsberg Academy of Music, which runs the Palace Theatre, since 1991. Since 1991, the international opera festival Chamber Opera Schloss Rheinsberg has been held in the Palace Theatre (Kavalierhaus), the Palace Court and the Nature Theatre.