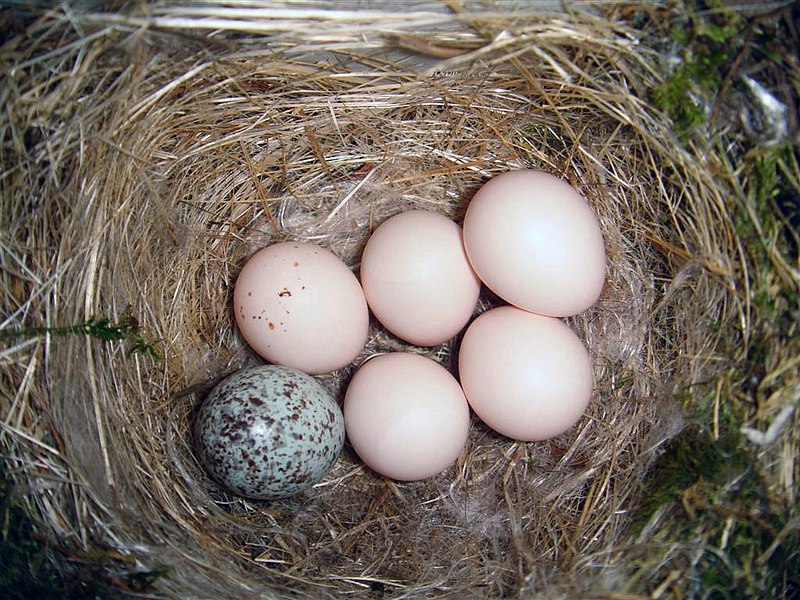 Brood parasites are organisms that rely on others to raise their young. The strategy appears among birds, insects and some fish. The brood parasite manipulates a host, either of the same or of another species, to raise its young as if it were its own, using brood mimicry, for example by having eggs that resemble the host’s (egg mimicry).

Brood parasitism relieves the parasitic parents from the investment of rearing young or building nests for the young, enabling them to spend more time on other activities such as foraging and producing further offspring. Bird parasite species mitigate the risk of egg loss by distributing eggs amongst a number of different hosts. As this behaviour damages the host, it often results in an evolutionary arms race between parasite and host as the pair of species coevolve.

There is a question as to why the majority of the hosts of brood parasites care for the nestlings of their parasites. Not only do these brood parasites usually differ significantly in size and appearance, but it is also highly probable that they reduce the reproductive success of their hosts. The “mafia hypothesis” evolved through studies in an attempt to answer this question. This hypothesis revolves around host manipulations induced by behaviors of the brood parasite. Upon the detection and rejection of a brood parasite’s egg, the host’s nest is depredated upon, its nest destroyed and nestlings injured or killed. This threatening response indirectly enhances selective pressures favoring aggressive parasite behavior that may result in positive feedback between mafia-like parasites and compliant host behaviors. 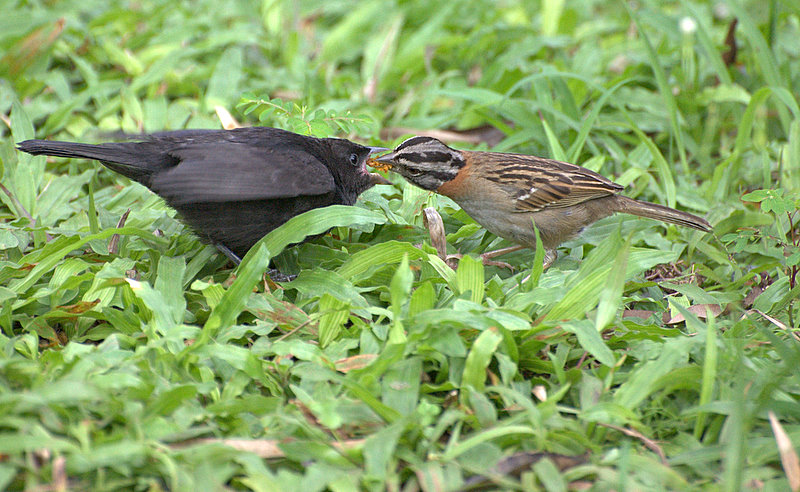 A shiny cowbird chick (left) being fed by a rufous-collared sparrow. 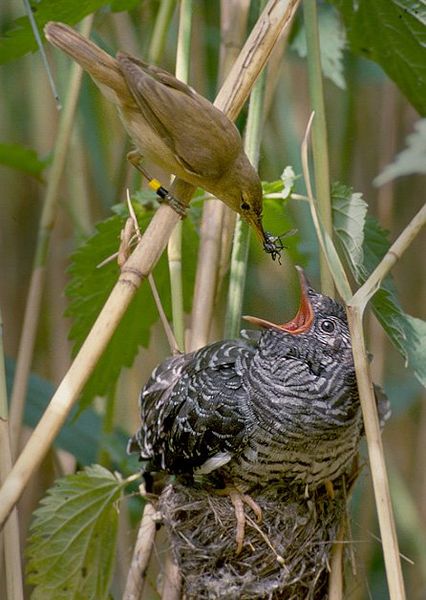 Brood parasitism, in which an egg-layer leaves her eggs with another individual’s brood, is more common among birds than any other type of organism. After a parasitic bird lays her eggs in another bird’s nest, they are often accepted and raised by the host at the expense of the host’s own brood. Brood parasites may be either obligate brood parasites, which must lay their eggs in the nests of other species because they are incapable of raising their own young, or non-obligate brood parasites, which sometimes lay eggs in the nests of conspecifics to increase their reproductive output even though they could have raised their own young. One hundred bird species, including honeyguides, icterids, and ducks, are obligate parasites, though the most famous are the cuckoos. Some brood parasites are adapted to hatch before their host’s young, which allows them to destroy the host’s eggs by pushing them out of the nest or to kill the host’s chicks; this ensures that all food brought to the nest will be fed to the parasitic chicks.

Parasitism or Mutualism (Symbiosis) – One or the Other