listen); Latin: Mogontiacum, French: Mayence) is the capital and largest city of Rhineland-Palatinate, Germany. The city is located on the Rhine river at its confluence with the Main river, opposite Wiesbaden on the border with Hesse. Mainz is an independent city with a population of 206,628 (2015) and forms part of the Frankfurt Rhine-Main Metropolitan Region.

Mainz was founded by the Romans in the 1st Century BC during the Classical antiquity era, serving as a military fortress on the northernmost frontier of the Roman Empire and as the provincial capital of Germania Superior. Mainz became an important city in the 8th Century AD as part of the Holy Roman Empire, becoming the capital of the Electorate of Mainz and seat of the Archbishop-Elector of Mainz, the Primate of Germany. Mainz is famous as the home of Johannes Gutenberg, the inventor of the movable-type printing press, who in the early 1450s manufactured his first books in the city, including the Gutenberg Bible. Historically, before the 20th century, the city was known in English as Mentz and in French as Mayence. Mainz was heavily damaged during World War II, with more than 30 air raids destroying about 80 percent of the city’s center, including most of the historic buildings. Today, Mainz is a transport hub and a center of wine production.

Mainz Cathedral or St. Martin’s Cathedral (German: Mainzer Dom, Martinsdom or, officially, Der Hohe Dom zu Mainz) is located near the historical center and pedestrianized market square of the city of Mainz, Germany. This 1000-year-old Roman Catholic cathedral is the site of the episcopal see of the Bishop of Mainz. 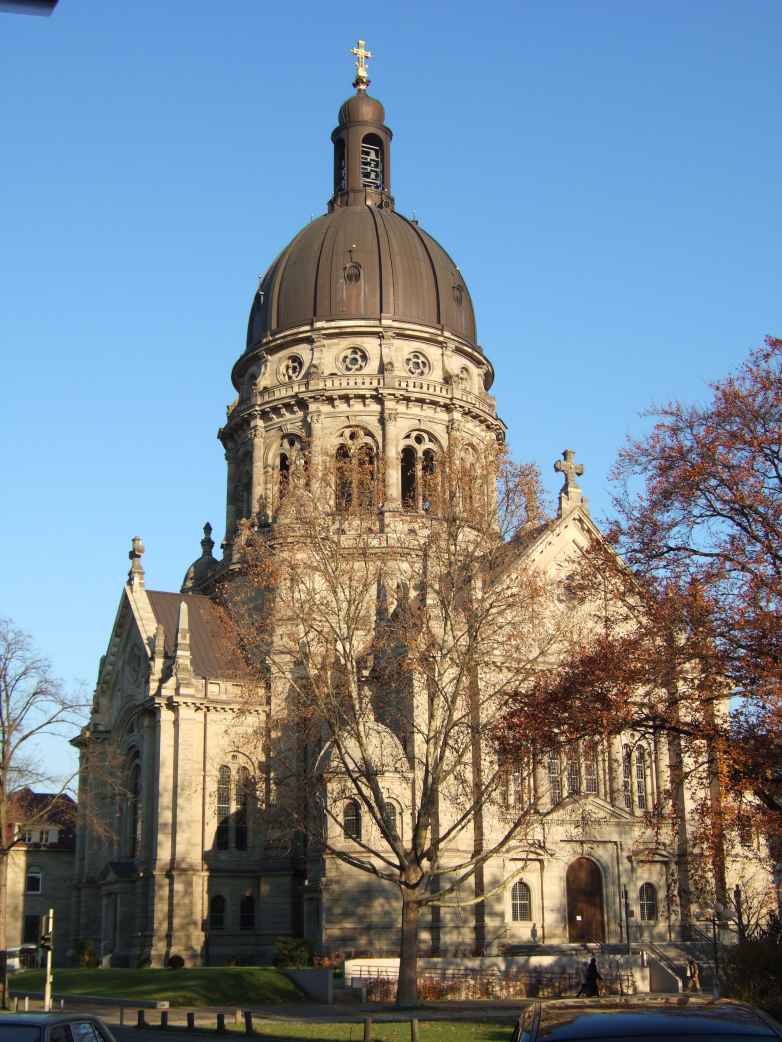 The Christuskirche (Christ Church) is a Protestant church located in Mainz. The Christuskirche was built between 1896 and 1903 designed by Eduard Kreyßig. It was consecrated on 2 July 1903. After demolition during the air raids of World War II the church was reconstructed between 1952 and 1954. The congregation forms part of the Protestant Church in Hesse and Nassau.