Germania is the personification of the German nation or the Germans as a whole, most commonly associated with the Romantic Era and the Revolutions of 1848, though the figure was later used by Imperial Germany. 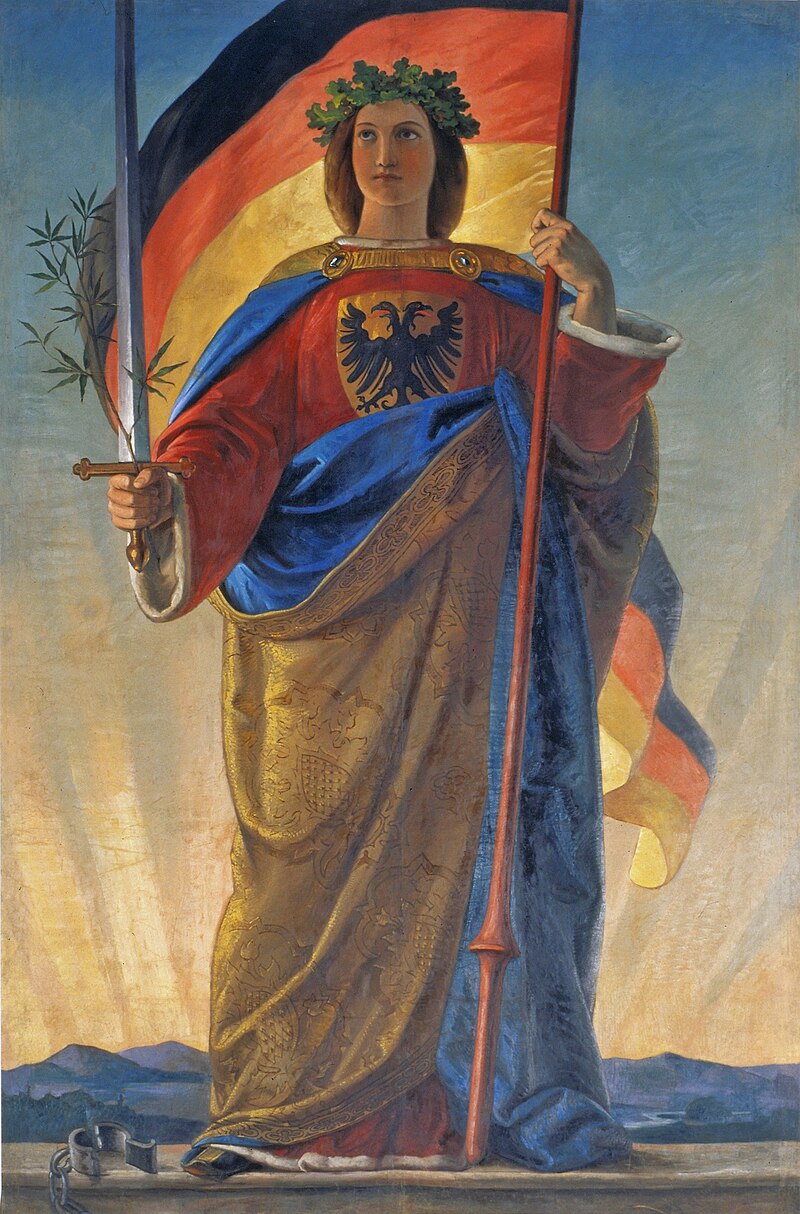 “Germania” is the Latin name of the country called “Deutschland” in the spoken language of its own inhabitants, though used as the country’s name in various other languages, such as “Germany” in English. In the country itself, the use of the Latin “Germania” was mainly literary and poetical, linked with patriotic and nationalist feelings, like “Hibernia” for Ireland, “Caledonia” for Scotland, “Lusitania” for Portugal etc.

Germania as personification is usually depicted as a robust woman with long, flowing, reddish-blonde hair and wearing armour. She often wields the Reichsschwert (imperial sword), and possesses a medieval-style shield that sometimes bears the image of a black eagle on a gold field. Additionally, she is sometimes shown as carrying or wearing the Imperial Crown of the Holy Roman Empire.

In post-1918 images, the banner she holds is the black-red-gold flag of modern Germany, but in depictions from 1871 to 1918 it is the black-white-red flag of the German Empire.

Meanings of some symbols 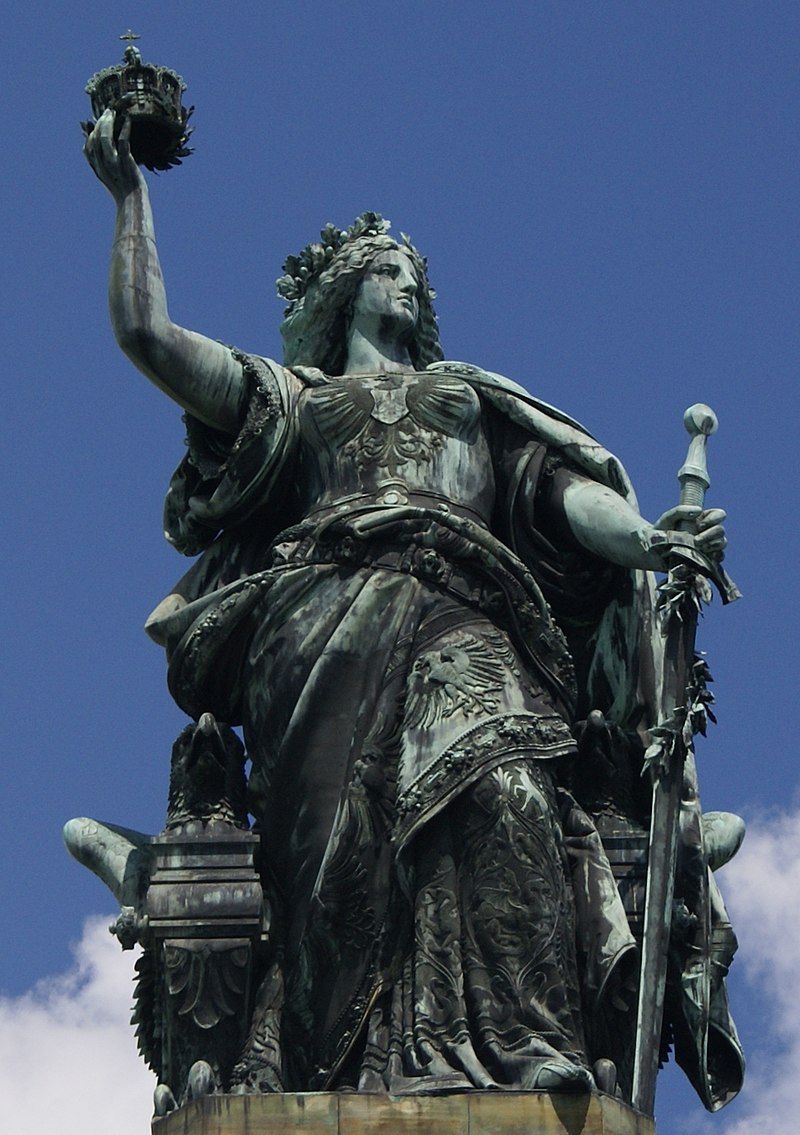 Figure of Germania atop the Niederwalddenkmal in the Rhine valley, dedicated 1883. 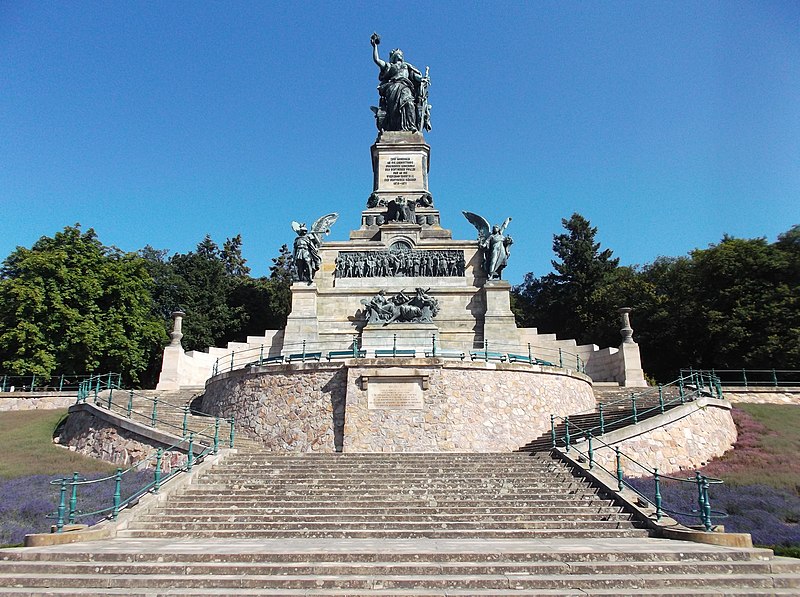 The Niederwalddenkmal is a monument located in the Niederwald, near Rüdesheim am Rhein in Hesse, Germany. It overlooks the valley of the Rhine and was built in the 1870/80s to commemorate the Unification of Germany.

The monument was constructed to commemorate the founding of the German Empire in 1871 after the end of the Franco-Prussian War. The first stone was laid on 16 September 1871, by Kaiser Wilhelm I (William I). The sculptor was Johannes Schilling, and the architect was Karl Weißbach. The total cost of the work is estimated at one million gold marks. The monument was inaugurated on 28 September 1883. The 38 metres (125 ft) tall monument represents the union of all Germans.

The central figure is the 10.5 metres (34 ft) tall Germania figure, holding the recovered crown of the emperor in the right hand and in the left the Imperial Sword.

“Wacht am Rhein” lyrics, under the Kaiser Relief.

Beneath Germania is a large relief that shows emperor William I riding a horse with nobility, the army commanders and soldiers. The relief has the lyrics of “Die Wacht am Rhein” (Watch on the Rhine) engraved.

On the left side of the monument is the “peace statue”. The “war statue” is located on the right. 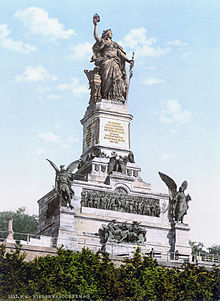 The monument’s main inscription is engraved on the pedestal of the Germania statue:

The Niederwald [de] is a broad hill on the right bank of the Rhine, between that river and its contributory Wisper, opposite Bingen am Rhein. The hill forms the southwestern apex of the Taunus range. Its summit is covered by dense forest of oak and beech. Its southern and western sides, which descend sharply to Rüdesheim am Rhein and Assmannshausen on the Rhine, are covered with vineyards. The monument is located at the edge of the forest, on the crest of the hill above Rüdesheim.

The Niederwalddenkmal can be reached by gondola lift (formerly a rack railway), from Rüdesheim to Niederwald, by car or chairlift from Assmannshausen or by trails on foot.

Bavaria statue, personification of the Land of Bavaria