The German auxiliary cruiser Atlantis (HSK 2), known to the Kriegsmarine as Schiff 16 and to the Royal Navy as Raider-C, was a converted German Hilfskreuzer (auxiliary cruiser), or merchant or commerce raider of the Kriegsmarine, which, in World War II, travelled more than 161,000 km (100,000 mi) in 602 days, and sank or captured 22 ships with a combined tonnage of 144,384. Atlantis was commanded by Kapitän zur See Bernhard Rogge, who received the Oak Leaves to the Knight’s Cross of the Iron Cross. She was sunk on 22 November 1941 by the British cruiser HMS Devonshire.

Commerce raiders do not seek to engage warships, but rather attack enemy merchant shipping; the measures of success are tonnage destroyed (or captured) and time spent at large. Atlantis was second only to Pinguin in tonnage destroyed, and had the longest raiding career of any German commerce raider in either world war. She captured highly secret documents from SS Automedon. A version of the story of Atlantis is told in the film Under Ten Flags with Van Heflin appearing as Captain Rogge.

The Hansa was an auxiliary cruiser of Germany‘s Kriegsmarine used during World War II.

She was known to the KM as HSK 5(II) (i.e., the second of that designation; the first was Pinguin), or also as Schiff 5. She was not given a raider letter by the Royal Navy as she did not enter active service as a commerce raider. The last German vessel to be converted into an auxiliary cruiser, the Hansa was named after the Hanseatic League.

Hansa was originally conceived as the cargo ship Glengarry. She was taken over by the Germans during the occupation of Denmark, while under construction at Burmeister & Wain (B&W) in Copenhagen. She was temporary renamed Zielschiff Meersburg and served as a target ship for the 27th U-boat flotilla.

In the winter of 1942/43, she was sent to the Wilton shipyard in Rotterdam, and later to Blohm & Voss, Hamburg, where she was converted into an auxiliary cruiser. She bore the designation HSK 5(II), reflecting the number of the ship yard she was converted in.

De-commissioned as a Hilfskreuzer in February 1944 the ship became a Kadettenschulschiff (cadet training ship).

From September 1944 to May 1945 she participated in the Baltic Sea evacuations, transporting over 12,000 soldiers and civilians at a time. The Hansa was the last ship, which escaped from Hela (pol. Hel).

Komet (German for comet) (HSK-7) was an auxiliary cruiser of Germany‘s Kriegsmarine in the Second World War, intended for service as a commerce raider.  Known to the Kriegsmarine as Schiff 45, to the Royal Navy she was named Raider B.

After completing one successful raid in the South Pacific, she was sunk by British motor torpedo boats in October 1942 whilst attempting to break out into the Atlantic on another. 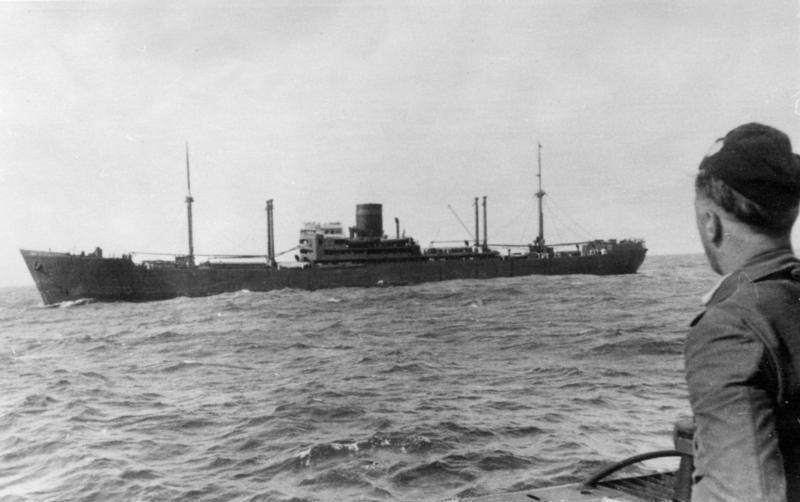 The German auxiliary cruiser Kormoran (HSK-8) was a Kriegsmarine (German navy) merchant raider of World War II. Originally the merchant vessel Steiermark, the ship was acquired by the navy following the outbreak of war for conversion into a raider. Administered under the designation Schiff 41, to the Allied navies she was known as “Raider G.” The largest merchant raider operated by Germany during World War II, Kormoran was responsible for the destruction of 10 merchant vessels and the capture of an 11th during her year-long career in the Atlantic and Indian oceans. 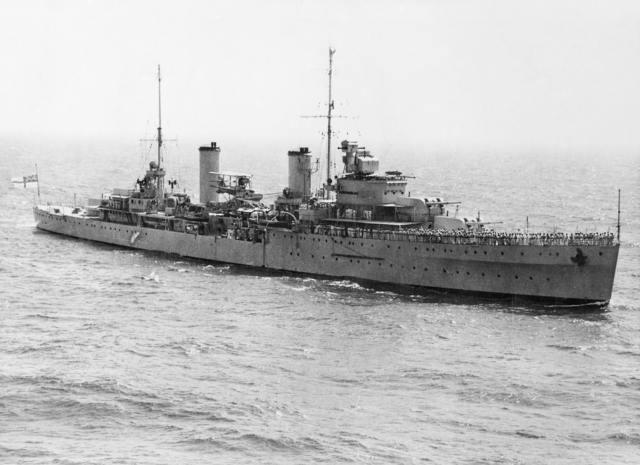 She is also known for sinking the Australian light cruiser HMAS Sydney during a mutually destructive battle off Western Australia on 19 November 1941. Damage sustained during the battle prompted the scuttling of Kormoran. While 318 of the 399 aboard the German ship were rescued and placed in prisoner of war camps for the duration of World War II, there were no survivors from the 645 aboard the Australian cruiser. The wreck of Kormoran was rediscovered on 12 March 2008, five days before that of her adversary.

Kormoran‘s success is commonly attributed to the proximity of the two ships during the engagement, and the raider’s advantages of surprise and rapid, accurate fire. Prior to the discovery of the wrecks in 2008, the cruiser’s loss with all hands compared to the survival of most of the German crew created controversy and spawned numerous conspiracy theories; some alleged that the German commander, Theodor Detmers, used illegal ruses to lure Sydney into range, others that a Japanese submarine was involved, or that details of the battle were concealed through a wide-ranging coverup.

Michel (HSK-9) was an auxiliary cruiser of Germany‘s Kriegsmarine that operated as a merchant raider during World War II. Built by Danziger Werft in Danzig 1938/39 as the freighter Bielsko for the Polish Gdynia-America-Line (GAL), she was requisitioned by the Kriegsmarine at the outbreak of World War II and converted into the hospital ship Bonn. In the summer of 1941, she was converted into the auxiliary cruiser Michel, and was commissioned on 7 September 1941. Known as Schiff 28, her Royal Navy designation was Raider H. She was the last operative German raider of World War II.

Orion (HSK-1) was an auxiliary cruiser of Germany‘s Kriegsmarine which operated as a merchant raider during World War II. Built by Blohm & Voss in Hamburg in 1930/31 as the freighter Kurmark, she was requisitioned by the navy at the outbreak of World War II and converted into the auxiliary cruiser Orion, commissioned on 9 December 1939. Known to the Kriegsmarine as Schiff 36, her Royal Navy designation was Raider A. She was named after the constellation Orion.

Formerly a freighter named Kandelfels, she was built by Deschimag A.G. Weser in 1936, and was owned and operated by the Hansa Line, Bremen. She was the sister-ship of Kybfels, and a half-sister of Goldenfels (built by Bremer Vulkan), which was converted into the raider Atlantis.

In the winter of 1939–40, she was requisitioned by the Kriegsmarine (KM) and converted to a warship by Deschimag A.G. Weser, Bremen. Her main armament, six 150 mm L/45 C/13 guns was taken from the obsolete battleship Schlesien and she was also fitted with one captured French 75 mm L/36 cannon, one twin 37 mm anti-aircraft mounting, four 20 mm anti-aircraft guns, and two single 53.3 cm torpedo tubes for 16 torpedoes. She was supplied with two Heinkel He 114A-2 seaplanes and 300 sea mines. She also carried 25 G7a torpedoes and 80 U-Boat mines for replenishing U-boats. 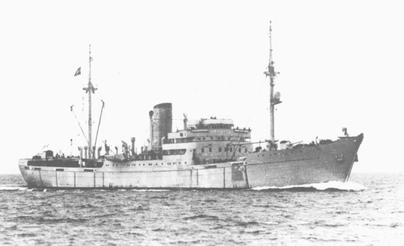 Stier (HSK 6) was an auxiliary cruiser of Germany‘s Kriegsmarine during World War II. Her Kriegsmarine designation was Schiff 23, to the Royal Navy she was Raider J.

The name Stier means “bull”, and represents the Taurus constellation in the German language. She was the last German raider to break out into the Atlantic in World War II.

Built by Germaniawerft in 1936 as the freighter Cairo, she was operated by the Atlas Levant Line (ALL) until being requisitioned for Kriegsmarine services in November 1939. After merchant warfare operations in the Baltic Sea, she was converted into a mine layer and was planned to be used during Operation Sea Lion. After this operation was canceled, the now renamed Stier was modified into an auxiliary cruiser in April 1941, first at the Wilton shipyard Rotterdam and later at Oderwerke, Stettin, and Kriegsmarinewerft, in Gotenhafen (Gdynia).

Thor (HSK 4) was an auxiliary cruiser of Germany‘s Kriegsmarine in World War II, intended for service as a commerce raider. Also known to the Kriegsmarine as Schiff 10; to the Royal Navy she was Raider E. She was named after the Germanic deity Thor.

Formerly the cargo ship Santa Cruz, she was built by Deutsche Werft, Hamburg, (DWH) in 1938, and was owned and operated by the Oldenburg Portuguese Line (OPDR), Hamburg. In the winter of 1939–40 the navy requisitioned her and had her converted into an auxiliary warship by DWH. She was commissioned as the commerce raider Thor in March 1940.

The MS Togo was a German merchant ship that was launched in 1938. Requisitioned by Germany‘s Kriegsmarine as Schiff 14, in April 1940 she participated in the invasion of Norway; in August 1940 was converted to a minelayer as part of the German plan to invade England; then from June 1941 she began conversion to the armed auxiliary cruiser (Hilfskreuzer) HSK Coronel.

Following Coronel‘s unsuccessful attempt in February 1943 to become the last German commerce raider of World War II, she was then used as a minesweeper (Sperrbrecher) before being recommissioned in late 1943 as NJL Togo, a night fighter direction vessel (Nachtjagdleitschiff), operating in the Baltic Sea.

As NJL Togo, she was the second of the Kriegsmarine‘s World War II radar ships, and the only one to survive the war.

After the war, Togo passed through various changes of ownership, name and function before finally being wrecked off the Mexican coast in 1984.

A Würzburg radar, similar to the one aboard Togo.

Widder (HSK 3) was an auxiliary cruiser (Hilfskreuzer) of Germany‘s Kriegsmarine that was used as a merchant raider in the Second World War. Her Kriegsmarine designation was Schiff 21, to the Royal Navy she was Raider D. The name Widder (Ram) represents the constellation Aries in German.

Built for HAPAG, the Hamburg America Line, at Howaldtswerke, Kiel, she was launched in 1930 as the freighter Neumark. After an uneventful career she was requisitioned by the Kriegsmarine for use as a commerce raider. She was converted for this purpose by Blohm & Voss in late 1939, and commissioned as the raider Widder on 9 December of that year. She sailed on her first and only raiding voyage in May 1940. 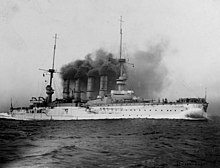 Audacity & Gold Bars – The First Voyage Of The SMS Möve