Rantzau Castle in Rantzau in eastern Schleswig-Holstein is the namesake and the former ancestral home of the primeval Rantzau family. The castle was the centre of a noble good and, according to this definition, is actually a manor house, due to its special importance in the country’s history and its once rich furnishings, however, it has been called a castle for quite some time. The house experienced a brief heyday from the end of the 16th to the early 17th century and was one of the most mature works of the Renaissance in Schleswig-Holstein. However, various conversions have changed the building so extensively that the former shape can only be guessed.

The Imperial County of Rantzau

The estate district has been inhabited and managed for more than 800 years. The name Rantzau – or Rantzow – indicates an even earlier wendic settlement of the area. The Rantzau family itself is not of Vaud origin, but the first knights established here, as was customary at the time, took the name of their property. The first known family member is 1226 Johann von Rantzau, who was the boy in the service of Adolf IV and was elevated to the knighthood around 1235. Johann von Rantzau was the founder of the various Rantzau lines that became influential in the following centuries for the history of Schleswig-Holstein. The estate, which developed here around a small fortified castle with a mansion, remained in the family’s possession for more than 500 years. During these centuries, Rantzau did not play a particularly important role in the country’s history and served as the seat of various branches of the growing Rantzau family.

The estate experienced a short flowering period under Heinrich Rantzau, who had the mansion rebuilt from 1590. Heinrich Rantzau was an avid builder and had already initiated numerous new buildings. His other buildings included the Wandsbeker Schloss or the Nütschau Mansion. The new building on the main site of his family belonged to the last buildings of Heinrich Rantzaus, he died in 1598. Until his death, he used it for occasional stays, but his headquarters were the Breitenburg. In the 17th and 18th centuries, the castle belonged to the family’s Breitenburg lineage. Christian Rantzau reached the stand of an imperial grapher in 1650 and founded the Reichsgraschaft Rantzau in the southern Holstein. In this process, the estate passed as compensation to Duke Frederick III, who soon after sold the property to another member of the Rantzau family. In 1655 the estate reached Christian Rantzau again, who had to pay a price of 64,500 Reichsthalers. His grandson Christian Detlev zu Rantzau was allegedly murdered in 1721 near the Barmstedt Castle by his brother Wilhelm Adolf Rantzau, after which the incumbent Danish King Frederick IV confiscated the Burtzau property. In 1726, the sister of the two brothers was able to acquire back the Rantzauer and Breitenburg possessions.

In the following years, the estate experienced different owners, who left different traces on the buildings. Frederick IV (King of Denmark) sold Rantzau Castle in 1728 to Heinrich Reventlow from the not far away Lehmkuhlen castle, which went bankrupt in 1737 and sold the property to the Eutin prince bishop Adolf Friedrich as early as 1740 for 94,000 Reichsthaler. This had the old Renaissance house converted by the central building into a three-winged Baroque castle. Adolf Friedrich was elected King of Sweden in 1751 and sold the estate to his Oberhof Marshal Jakob Levin von Plessen. Since von Plessen had no heirs – his children had all died young – and he was also in debt with his neighbour Count Heinrich Christoph von Baudissin, the farm was sold to the Count in 1761. The estate then remained in his family’s possession for over 200 years.

At the turn of the century, the estate still had 2,600 hectares of economic land. The land holdings had to be gradually sold, for example after the First World War several leasehold villages were released from the farm. After World War II, the castle had to serve as a refugee camp and took in more than 170 people, some of whom lived there until 1960. In 1965, the manor house was separated from the estate and sold to the Majerholz family, later the rest was also sold. The new owners set up a castle hotel in the house, but it no longer exists today. In 1976 and 1978, the buildings of the former commercial council were destroyed by arson.

The castle is privately owned and sold to a new owner in 2009. A conflict arose with the heritage protection authority after plaster was removed from walls and ceilings during exploratory work. According to press releases, the building has changed hands again, and the future use of the mansion is uncertain. It cannot be visited or entered. The actual state of forfeiture is documented by an expert report published by the current owner on the internet.

Not much is known about the shape of the first castle. A pedigree, made around 1587 by Daniel Freese for Heinrich Rantzau, informs about the previous building of the later castle, which shows a pedigree surrounded by 50 goods of the Rantzau family. For Ranzovia, a typical, two-time semi-detached house is depicted, as was customary on many fortified goods in the country from the Middle Ages to the Renaissance. 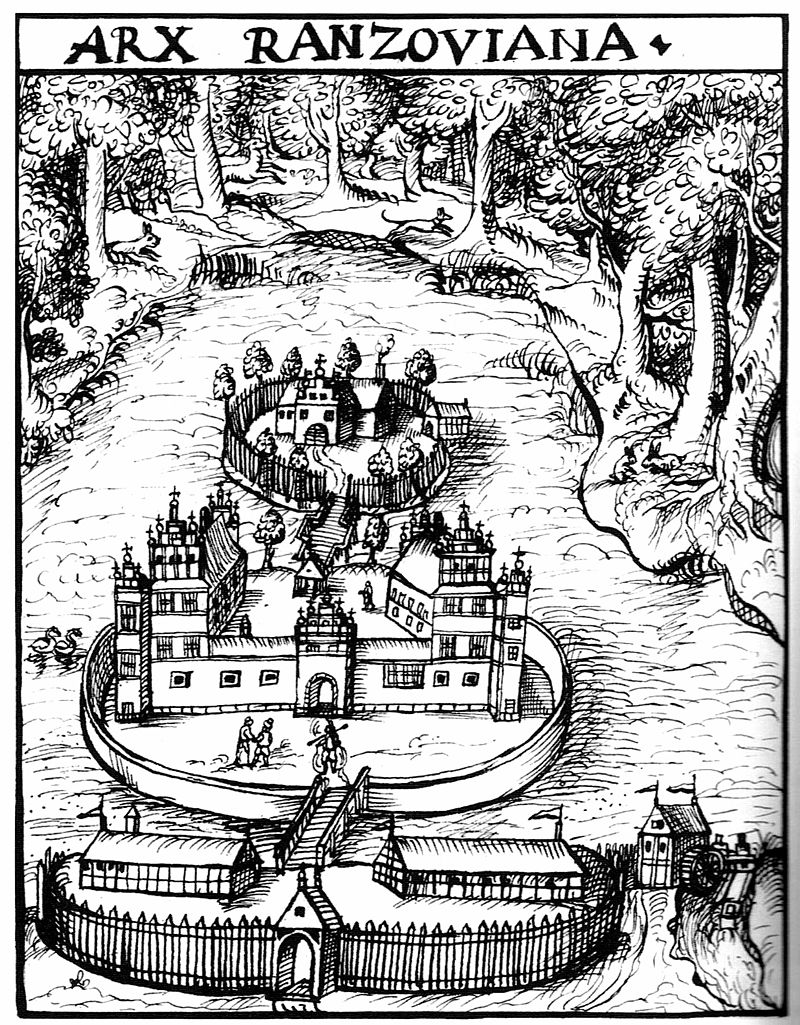 The present castle dates back to the building of Heinrich Rantzau from 1590. Rantzau was a well-travelled man with a pronounced sense of art. He was well informed about Renaissance art in Italy and France, and the new building of the mansion was to be done in an Italian style. Although the northern European interpretation of the Renaissance was very free, the work was considered – one of many new buildings under Heinrich Rantzau – when completed as one of the most modern and elaborate noble seats in the country.

On Rantzau, the traditional shape of the semi-detached house was overcome and the structure was separated into two parts: Two longitudinal building wings with two storeys above a basement floor. In addition to a number of living spaces, each wing included a large hall: The south wing, the chapel, and the north wing, the Knight’s Hall. The gable sides of the saddle roofs were decorated obelisks, balls and tail syches. A staircase tower was placed on the outer corners of the buildings. Both wings were connected by a low intermediate structure. The castle received the early form of a three-winged complex through this addition of individual buildings.

The original building can still be identified today in the otherwise greatly changed mansion. The castle stands on the old foundations and the side wings are still there, but robbed of their high saddle roofs and jewelry gable. The four staircase towers can still be found at the corners of the wings and the floor plan of the first floor in the northern building still shows the division of the 16th century. The gate passage was removed and instead in the 18th century on the opposite side of the courtyard built by BJ. Lewon a new central building and tower, which made the house a complete three-wing complex. The present, sober appearance of the castle is due to reconstruction from 1845 to 1847, the main portal with the staircase did not take shape until 1906. The planned use as a hotel required further reconstructions around 1965. In 2009, exploratory work was carried out to prepare the basic renovation necessary due to the completely dilapidated state of affairs. The refurbishment did not take place after intervention by the Heritage Protection Authority in 2010.

The Kossau, a stream that surrounds the castle area, was once dammed up to a lake and the old mansion was completely surrounded by water. The lake was drained in the 18th century. The former economic courtyard, whose remains have now disappeared completely, was on a peninsula protected by palisades, which was followed by two other islands with the mansion and a subsequent garden pavilion. A straight viewing axis once ran through the castle area, which included the courtyard and the mansion and led to a circular island with the small pleasure house. The visual axis was interrupted by the central tower built in the 18th century.
The southern wing of the side was preceded by a baroque parterre, the place of which is now occupied by a large meadow. Only a few rows of trees are preserved from the baroque design, and there are no more rudiments from the former Renaissance garden of Heinrich Rantzaus. The green areas around the castle now correspond to a landscape garden. As they are largely left to their own devices, a gradual renaturation is taking place.