Noer Castle in Noer in Schleswig-Holstein was once the mansion of a manor house. After the owners of the estate changed several times over the centuries, the farm was discontinued in the 20th century and Noer Castle now serves as a youth education and meeting place. Although the castle is open to house guests in this setting, it is usually not accessible to visitors, with the exception of the farm. 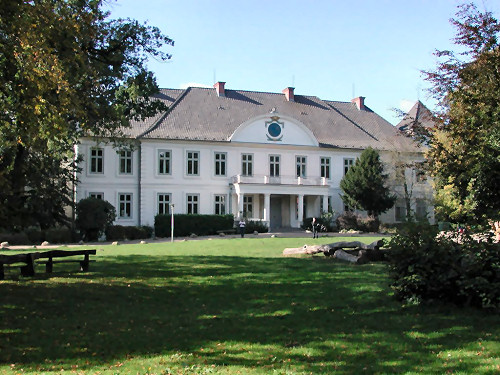 Noer belonged to the Duchy of Schleswig and had been in the possession of several of Schleswig-Holstein’s primeval families since the late Middle Ages. From 1417 to 1610 it belonged to the Ahlefeld, until 1675 the Rantzau, then briefly to the Rumohr family and then from 1680 to 1763 to the Brockdorff family. The previous building of the present castle was built at the beginning of the 18th century to replace an older residence in neighbouring Grönwohld. In 1763, the estate came into the possession of Counts Moltke, under whose rule serfdom on Noer was abolished at the beginning of the 19th century. In 1832, Noer was acquired by the Danish princess Louise Auguste to serve as a residence for her second son Friedrich Emil August. The so-called Prince of Noer served as Danish governor and subsequently played a significant role in the uprising against Denmark from 1848. As a result of these events, Friedrich Emil August went into exile. After the end of Danish rule in 1864, the prince was appointed Prince of Noer by the Prussian king and Noer became the family seat of his line.

In the 20th century, numerous changes took place on the estate. The manor of Noer was dissolved from 1928 and the village of the same name emerged from the goods district of Noer, the lands were leased. In 1933, the castle burned out in a large fire and was subsequently renovated. In 1960, the property was handed over by Ehrengard Countess to Rantzau to the Schleswig-Holstein Society for Youth Care Institutions and a youth education and meeting place was established on the former estate, which remains today.

According to an old definition, only the buildings of the rulers in Schleswig and Holstein castles were mentioned, the residential buildings of the landed adhere, to which Noer belongs, were therefore to be described as mansions. However, this rule was not applied universally, including in Noer, which was also royal owned by Princess Louise Auguste in the 19th century and is known as the Noer Castle to the present day.

The present castle comes in its basic features still from the building, which was built under Joachim von Brockdorff from 1708 to 1711 together with the farm. The building has been extended and rebuilt several times over the centuries, so the side towers were only added at the beginning of the 20th century. The central building of the castle was largely destroyed in a fire in 1933 and then rebuilt in the almost baroque style in reference to the old figure, simplifying the shape of the roof. It is a broad-based, two-storey building of thirteen window axes, the narrow sides of which are flanked by each of a three-storey tower. The representative shop façade is aligned on the courtyard and adorned with a segment gable, the main portal is located under a central portico. The rear façade is oriented towards the garden and largely dispenses with structural jewellery. Inside, the old room layout remained intact even after the fire, although due to today’s use there are hardly any traces of the former equipment. The most important interior is the garden hall that follows the vestibule, whose braop-style wall panelling dates back to the second half of the 18th century. Some smaller salons with rococo-style stucco were restored after the fire.

The castle is opposed to several buildings of the 18th century, which were created at that time together with the new construction of the farm. It is the so-called inspector’s house and the riding stable, which were today added to the station of the meeting place and serve as leisure and bed houses.

To the west of the castle is an English-style landscaped garden that leads to the nearby forest area and from there to the corner forest of the bay. Today, the garden is also used for the meeting place. The park is divided with lawns and groups of trees, as contemporary garden architecture a small mausoleum was built in the second half of the 19th century. This building was designed by the Smuper pupil Heinrich Moldenschardt and served as a grave for Count Friedrich Carl August of Noer and his wife Carmelita. 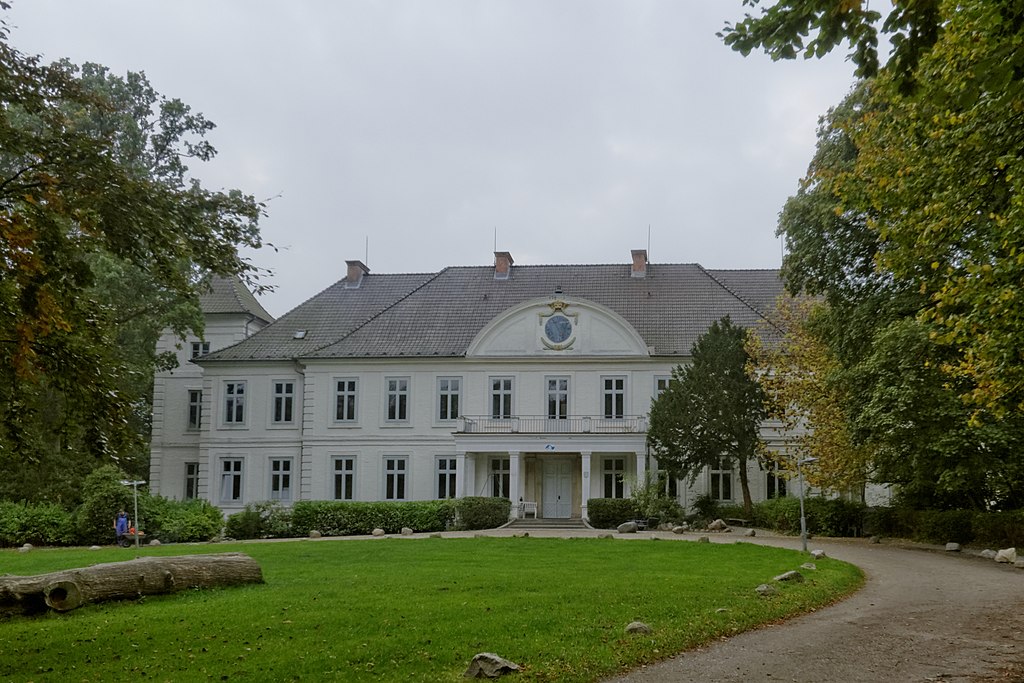