Johannstorf Castle (or Johannstorff) was once the mansion of the estate of the same name. It is located in the district of Northwest Mecklenburg between Travemünde and the small town of Dassow. The baroque building in need of renovation has been vacant for several years and is not open to the public.

The estate was originally owned by the Buchwald family, who had been born there since 16 Jahrhundert. Since the marriage of the hereditary maid Margarete von Buchwald to Claus Schack, the owners have been called Schack von Buchwald. The conferencing councillor and Lübeck resident Domherr Schack von Buchwald (1705 – 1770) built the present castle from 1743 as a successor to a medieval water castle for himself and his wife Eleonore Elisabeth, née von Plessen. In 1782, the property went to the Eckermann family, who lived here for several generations until 1945. After expropriation of the landowners in the post-war period and under the government of the GDR, the castle served as a residence for private purposes.

In 1992, the then independent municipality of Pötenitz was sold for DM 31,000 to the investor Kurt-Peter Gaedeke, who wanted to develop the plant similar to the estate Wotersen in Schleswig-Holstein, which already belonged to him. Because of the ownership, he was to purchase the facility in two parts: The castle and part of the park from the municipality of Pötenitz, the courtyard and stables of the federal soil recovery and management GmbH (BVVG). However, the expected renovation did not take place and the building fell into disrepair in the following years. The buyer justified this with arguments with neighbouring property owners. The necessary acquisition of required Hofflachen areas in the immediate vicinity of the castle by the BVVG also did not take place.

In 2008, the castle and the courtyard grounds served as the backdrop for the filming of the film The White Ribbon – A German children’s story by director Michael Haneke.

After more than ten years of vacancy, the city of Dassow, as the legal successor of the municipality of Pötenitz, has been examining the possibility of the resettlement of the Kaufvertrags since 2007, after a new interested party had presented a concept for the plant.  However, the owner refused to return in a mediation attempt. In May 2011, the City of Dassow finally filed a complaint against the owner in the District Court of Schwerin, bringing a contractual clause which, in the event that the buyer made his contractual obligations to invest 1.3 million euros in the first should not be in place for five years, allowed for a return transfer for 30 years. In a judgment of 22 December 2011, the court granted the action and ruled that the owner must return the property to the city of Dassow for 108,000 euros. The defendant appealed the sentence to the Rostock Higher Regional Court. As announced by the Higher Regional Court in 2013, both parties were compared. The castle remains in the possession of Kurt-Peter Gaedeke. He undertook to carry out extensive renovation work at both the castle and the outbuildings by 2018. 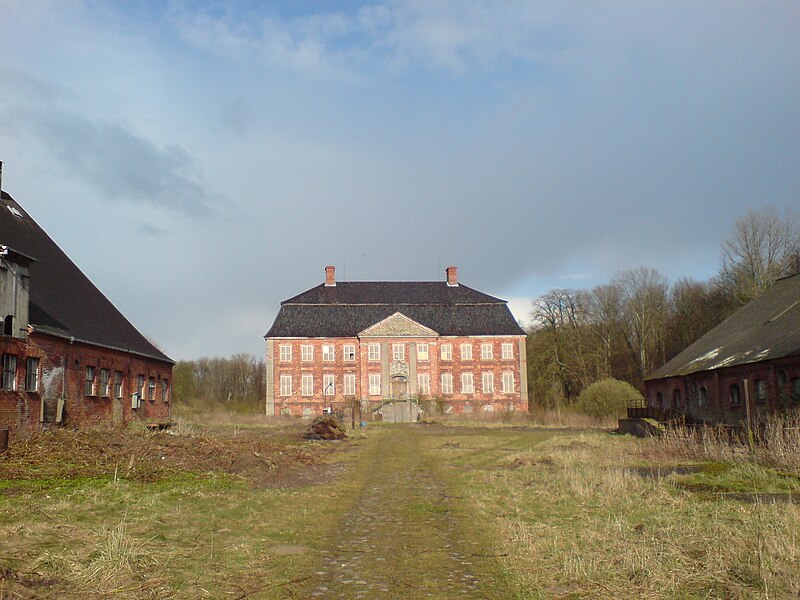 The manor house was built in 1743 according to the plans of Rudolph Matthias, it was his last major work before his death. The builder was Schack von Buchwald, whose wife inherited the Basthorst estate from her brother. Johannstorf is a quader-shaped, mischicfied building with two full floors above a basement and a large mansard roof. The house is built entirely of brick, emphasizing the corners of the building with hinted rustika. On both the garden and courtyard sides, a three-axle, overrimred risalite leaps flat in colossal order. The courtyard portal and gabled field are adorned with elaborate sandstone décor. Above the family coat of arms of the family of Buchwald stands the word AMANTIBUS in the gabled field, which means “for lovers,” or “for lovers.”
Inside the building, the baroque layout with large staircase and banquet hall as well as parts of the stuckwork have been preserved. The former furnishings are almost completely lost, the building has been largely empty for several years. Johannstorf Castle is in great need of renovation. The windows and door openings are closed by boards to protect against vandalism, the hoof island is not accessible.

The castle stands at the end of a west-facing economic court above Lake Dassower on a nearly square courtyard island, whose trenches are increasingly being trumpet due to a lack of care in recent decades. The complex is probably inspired in its construction by the not far away Bothmer Castle, although here in a less elaborate variant only the manor house is surrounded by water and has been dispensed with the pavilion-like wing buildings.

The farm itself is formed by the outbuildings of the former estate, which consists of barns and stables as well as an upstream gatehouse. The farm buildings, the gatehouse and the courtyard are in a ruinous state, as is the castle. To the east of the manor house is a feral garden, in the basic features of which the remains of the once baroque garden can still be seen.

The gatehouse roofer was damaged in World War II. From the refugee families who had found refuge in the castle after the war, the scaffolding of the roofer was dismantled and rebuilt without bricks in the large entrance hall. It was still shown in this state in 1992.

Other castles in Mecklenburg-Vorpommern: