The Wotersen estate, also known as Wotersen Castle, was owned by the noble Bernstorff family for almost three centuries, which played a major role in shaping Hanoverian and Danish politics in the 18th century. The estate is located in the municipality of Roseburg in the district of Lauenburg in the southeast of Schleswig-Holstein.

A village of Wotersen was first mentioned in the Ratzeburg Ten Register in 1230. The noble estate of the same name, as such since the 16th century at the latest with its own jurisdiction, passed into the possession of those of Dalldorf (also Daldorff, a local gender with a headquarters in nearby Dalldorf) in 1408. Generations held (after a short pledge in 1672 to the family of Falkenberg’s triggering by Valentin Johann von Dalldorf).

In 1717, Wotersen was acquired by the Kurhannoverian minister Andreas Gottlieb Freiherr von Bernstorff (1649 – 1726). As an influential politician, he was politically active both at the cellesheous and Hanoverian court, as well as in England under King George I. As a wealth investment, he acquired the estates Stintenburg in the Lauenburg and Gartow in the Wendland, along with Wotersen; Both farms are previously owned by the family. From 1720, in place of the castle destroyed in the Thirty Years ‘ War, Bernstorff had a new estate carried out by Johann Caspar Borchmann and converted it into a family fidon, a foundation in which the farm is passed on undivided in the family.

In 1737 his grandson and later Danish Foreign Minister Johann Hartwig Ernst Graf took over Wotersen (1712 – 1772) Wotersen and soon commissioned Johann Paul Heumann to carry out extensive reconstruction work, which was completed in 1765. In 1770, after being overthrown by Johann Friedrich Struensee, he withdrew to his property, where he died in 1772 at the age of 59. The garden planned under him was no longer implemented, the interior was not completed until the middle of the 19th century under a great-great-nephew of Bernstorffs. He also had the Baroque garden transformed into a landscape park and modernised the economic courtyard.

The estate remained in the family’s possession until 1996, when it was sold to the real estate salesman Johann Max Böttcher and is now owned by Kurt-Peter Gaedeke. 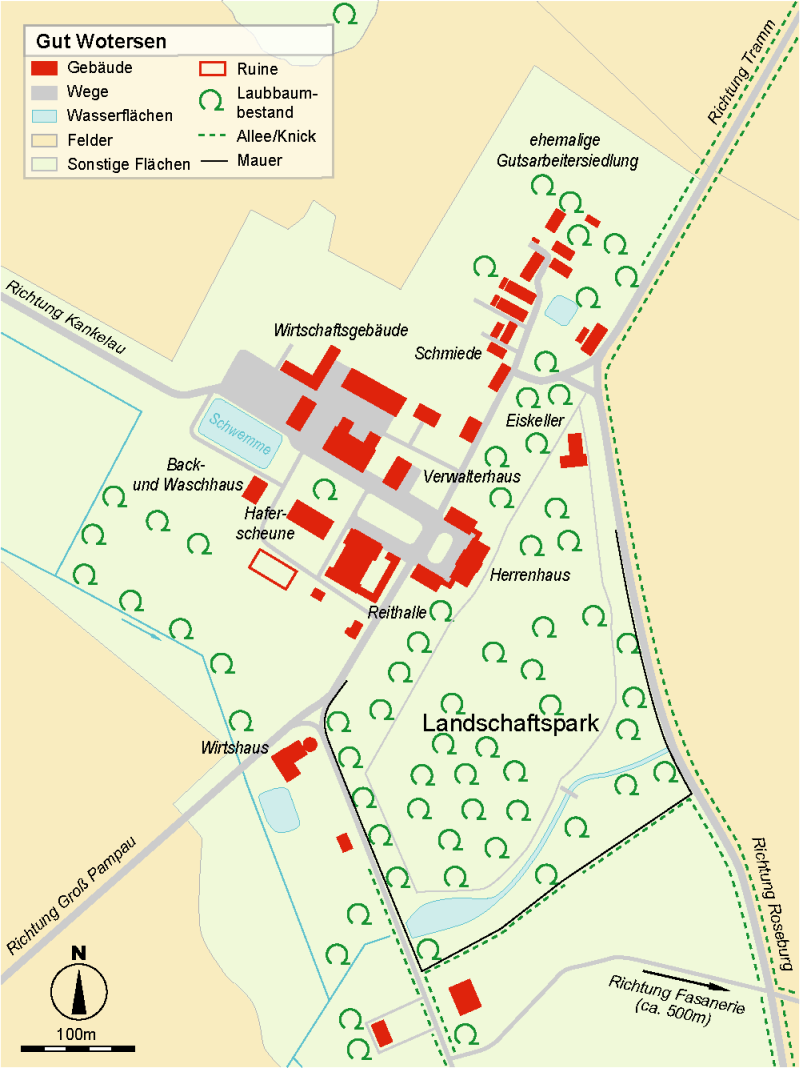 The facility is designed in a north-south direction and was accessible via a dam. There was and does not be a gatehouse, the mansion is a three-wing complex with Ehrenhof. In the middle of the complex is a water basin, which was used as a potion or a slug.
The manor house was given its present shape during the reconstruction in the middle of the 18th century (see above), during which the building was reinforced. The eleven building with a high forest roof shows three floors to the courtyard side, and only two to the garden side due to the rising terrain. The mid-risalite of the symmetrically rhythmically structured façade of hair wears a flat pediment showing the coloured family coat of arms executed in sandstone. The one-and-a-half-storey side wings are each connected to the main building by a flat angle building.
Through the entrance hall one enters a representative staircase, in which a large part of the portrait collection of the Bernstorffs is exhibited. Most of the other rooms of the mansion are rather simple.

The farm buildings, built from split field stones – an economic building – uncharacteristic of the region, were originally arranged symmetrically along a central axis. The bakery and washhouse with oat storage and the rye barn date back to the 18th century. The caretaker’s house was also built in 1721, and the riding hall was not built until the 19th century.
Agriculture is still in operation on Wotersen, but the mansion is not accessible. On the farm and in the halls, however, there are regular events, in the Reithalle, such as concerts as part of the Schleswig-Holstein Music Festival. They can also be rented for private events.

Gut Wotersen can be reached from the A24 from Hamburg to Berlin via the Talkau and Hornbek exits. There is also a bus service to Mölln and Lauenburg.
The European hiking trail E1 passes the Wotersen estate.