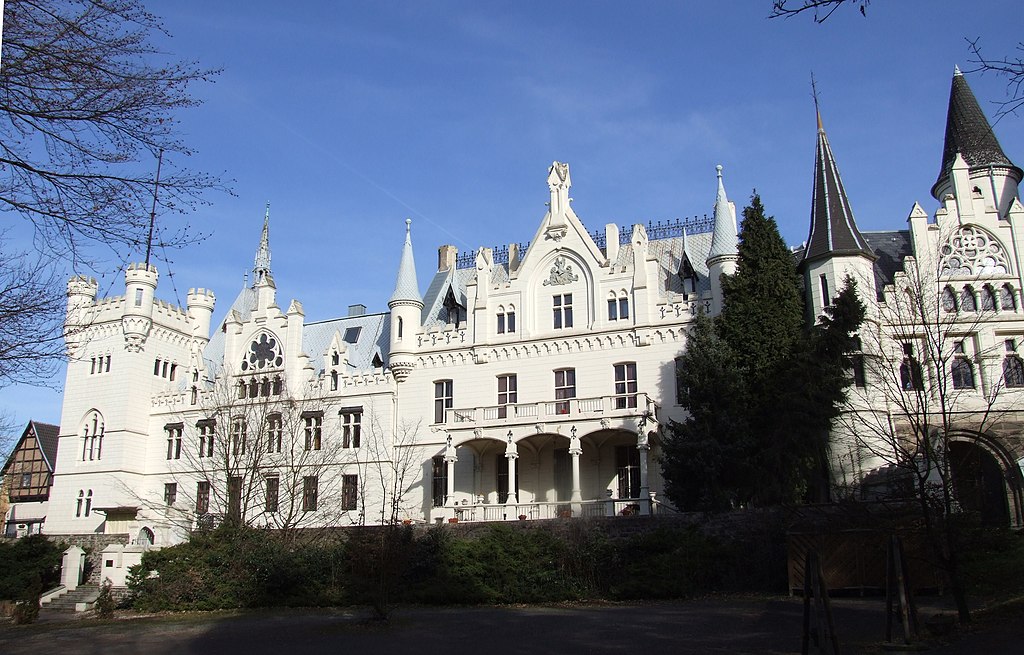 Ramersdorf Castle in Ramersdorf, a district of the Bonn district of Beuel (North Rhine-Westphalia), was founded around 1230 and existed as the coming of the German Order until the secularization in 1803. The buildings and properties preserved in Ramersdorf then took up a changing private property. After a fire in 1842, the entire complex was rebuilt in the style of the neo-Gothic. A citizens ‘ initiative managed to preserve the building during the construction of the A 59 and A 562 motorway junction in the early 1970s.

In canon law, commendam (or in commendam) was a form of transferring an ecclesiastical benefice in trust to the custody of a patron. The phrase in commendam was originally applied to the provisional occupation of an ecclesiastical benefice, which was temporarily without an actual occupant, in contrast to the conferral of a title, in titulum, which was applied to the regular and unconditional occupation of a benefice.

The word commendam is the accusative singular of the Low Latin noun commenda, “trust”, or “custody”, which is derived from the verb commendare (“to entrust”).

Granting a benefice in commendam became most common with monasteries, and the commendatory abbot drew a portion of the revenue of the monastery but without fulfilling the duties of the abbot or even residing at the monastery.

The place where the castle/commendam came into being is mentioned for the first time in the 9th century. The Bonn Cassius pen had possessions in Ramersdorf and Heisterbach Abbey also received interest and tithing there.

The Ramersdorf Castle was one of the 300 or so Commendams of the German Order, which were created from 1200 to 1300 in the European area in connection with the Crusades. The founding charter of the Ramersdorfer Haus is lost. Therefore, the exact year of incorporation is not known, nor is the closer circumstances that led to the foundation. The George Chapel, which has survived and is originally a member of the Coming Day, was built between 1220 and 1230. From this it can be concluded that the other historic coming buildings were erected at the same time. As the founder of the commons, Count Henry III of Sayn and his wife Mechthild are most likely to come into question. The first written document the Coming Calls dates back to 1254.
The most important task of the commissions was to provide economic services for the German Order. After the Crusades and the loss of meaning of the German Order state, these tasks were eliminated. The Coming Ramersdorf lost her convent and became a noble residence, on which the comtur was the only representative of the Order to manage the extensive possessions. During the 18th century, the judge of the Löwenburg Office also resided in the buildings of the Coming Office.

The State of the Teutonic Order

After secularization, the buildings of the Coming Ramersdorf came into the possession of the Duchy of Berg and went with Napoleon to the Grand Duchy Berg. In 1807, the castle was sold to Stieftochter von Salm-Reifferscheidt-Dyck. The prince did not live in Ramersdorf, but at Dyck Castle. For a long time, only one administrator occupied the complex. The stepdaughter of Salm-Reifferscheidt-Dyck, freethon of Francq, took over the building with all the associated properties in 1861, which has since been plastered into a castle. In 1881, she sold her come-by to the merchant Rudolf Herberz, originally from Uerdingen. Three years later, the castle was acquired by (((Baron Albert von Oppenheim))).

In 1940, the castle and park were sold to the Deutsche Reichsbahn and the inventory of those coming on was auctioned off. The buildings survived the Second World War without damage, even though the German Wehrmacht had set up an ammunition depot near the castle.

After the war, the castle was initially housed by service groups of former German prisoners of war, which were initially obliged by the British occupying power. After the withdrawal or dissolution of the service groups, the Deutsche Bundesbahn (German Federal Railway) set up a training facility. Until 1973, it hosted teaching and international accommodation. Since then, it has increasingly fallen into disrepair and threatened to be demolished as part of the construction of the A 59 and A 562 motorway junction. A citizens ‘ initiative managed to prevent these plans and save the castle.

In 1978, the Federal Office found a buyer. The refurbishment of the building spanned a three-year period. Since then, the castle has included a permanent exhibition of furniture from different centuries, as well as an antique shop. In addition, a hotel and a restaurant and a café were built in the former “English wing.” The city of Bonn offers the possibility of a civil wedding ceremony in the rooms of those who come on selected dates. 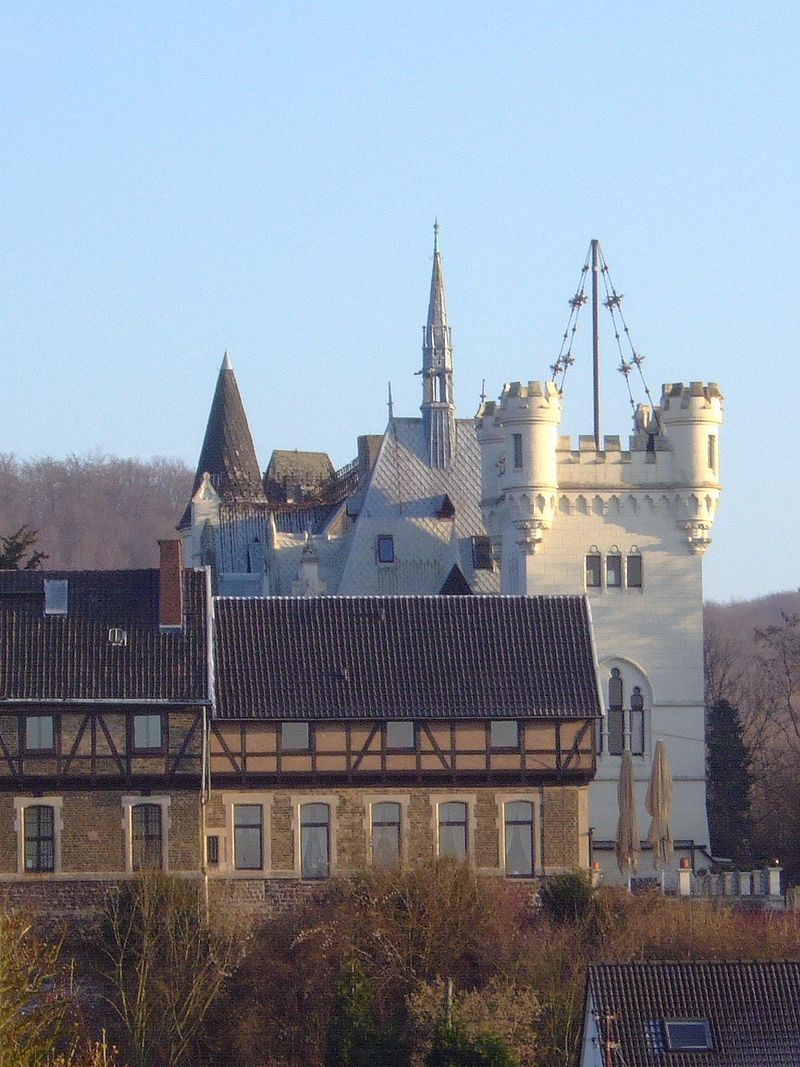 Among a composite of a German Order, a different number of Knight Brothers belonged under a comtur. In the literature, Ramersdorf mentions the number twelve. In addition to the brothers, there were also half-brothers on the Ramersdorf Coming. Thus, a document from 1300 notes the entry of a half-brother, who went by the name Hermann von Dorflur and donated part of his possessions to the Ramersdorf house. About twelve to 15 commations were organized in a ballei, the land comture of which was at the forefront of the land. The Order as a whole was led by the High Master, to whom some coming and ballies were directly subordinated. This was also true for Ramersdorf until 1371. After that, the come-on was incorporated into the Ballei Alden Biesen.

The comture of the Ramersdorf comers were mostly sons of Rhineland nobles, ministries and urban patricians in the 13th and 14th centuries.

One of the most important comture in Ramersdorf was Eberhard von Virneburg. Before taking over the office in the Rhineland in 1328, he had already held the highest offices in service for the German Order in Prussia. After being in Marienburg from 1298 to 1304, he took over the post of chief espitter in 1309, which was one of the Order’s great members.

In today’s building, the original building’s is housed in the “cores of the rising Mauerteils”, the double gate complex with passage and pedestrian gate, and the George Chapel, which was transferred to the Old Cemetery in Bonn in 1846/1847.

The earliest depiction of the buildings took place in the 16th century. A detailed picture conveys a stitch by Romeyn de Hooghe, which was taken around 1700.

Access to the buildings was through two passageways listed in Trachyte, through a large round-arched gate and a smaller pointed gate next to it. “The leaf capacitality of the columns supporting the round turn and the circular placed in the vertex of the pointed passage date this portal into the latest Romanesque,” to the time when the coming was born.

Through the driveway, the visitor reached a courtyard. On its north side stood the chapel, while on the west side were two smaller buildings built at different times and the eastern narrow side of the main building. On the east side, a wall dragged on, with a small building on the courtyard.

The main building was an elongated building with a rectangular floor plan. It stretched from east to west, was two-storey and showed around 1700 cross-sprout windows, which were presumably inserted into the construction some time after the formation of the Gäude [?]. On the middle of the south side lay a risk-like front of three axle windows. Next to it stood a tower, probably for the stairs. On the western narrow side was a small single-storey building and on its north side another side building. Opposite the north side of the main building were single-storey farm buildings, the western tract of which is designated as a draw by the large entrances.

The George Chapel was built as a three-nave hall building. It is 14.20 metres long and 7.70 metres wide. The chapel included a tower, which was located on the south side, close to the side choir.

Conversion in the 19th century

As a result of secularization, the several changed comings were converted into a castle complex in the 19th century. In 1842, the wing attributable to the Baroque was altered, “dating from the same period, barrel, embankment and terrace walls date with turrets.”

The joint building and the monumental “Bergfried” with round staircase on the southeastern wing were added according to plans by Edwin Oppler in the 1860s, in 1885 Wilhelm Hoffmann expanded and revised the existing complex in Godizing forms, which were attached to the Drachenburg orient. At that time, the present castle courtyard with a fountain complex was built. The “English wing” was added as a brick wall construction towards the end of the 19th century.
“The colourful ceiling frames and wall panelling, which are fully preserved in many rooms, are an important example of the art of art of historicism.” 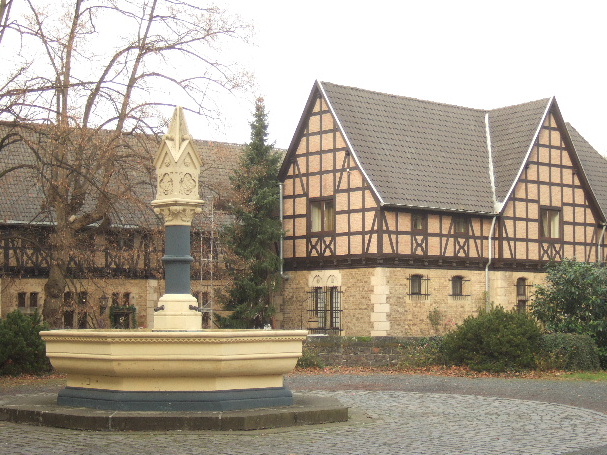 Castle courtyard with fountain – in the background of the “English wings”

Under the direction of Wilhelm Hoffmann, a park in the exterior of the castle was created towards the end of the 19th century. He has a valuable stock of rare conifers.

As access to the park, a Gothic style gate complex was built in 1884. A coat of arms adorns the upper arc field. In the lower part of the coat of arms, two crowns flank an anchor. In the upper part is a star attached, above it the protective mask of a knight’s armor with helmet bush and ribbons.

Built behind the gate complex, the gatehouse is now in private hands and, after being neglected for many years, has been restored in style.

The surviving parts of the park are now being slashed by highways. 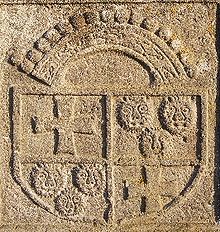 The area outside the castle included a crossroads, which is now located on an access road to the castle. The cross date back to the second half of the 17th century.

In the camp book of the mayor Vilich, to which Ramersdorf belonged, the cross is referred to in 1858 as the “Commendekreuz.”  It is dedicated to Gottfried Freiherr of Bocholtz of Orey. From May 20, 1642 to September 2, 1649, he was a comtur in Ramersdorf. In 1658 he became a land comture of the Ballei Alden Biesen.

The inscription on the cross reads:

A split coat of arms is placed above the inscription. In fields 1 and 4 the German Order Cross can be seen, in fields 2 and 3 three lion heads – the Bocholtz coat of arms.

The archive of the German-speaking Ramersdorf is “poorly handed down.” The State Archives of Dusseldorf contains 18 Ramersdorfer originals as part of the archive of the former Ballei Alden Biesen. The Central Archives in Vienna preserve many more originals, but they do not go beyond the period after 1400. Two copiars owned by the State Archives of Düsseldorf offer a replacement. 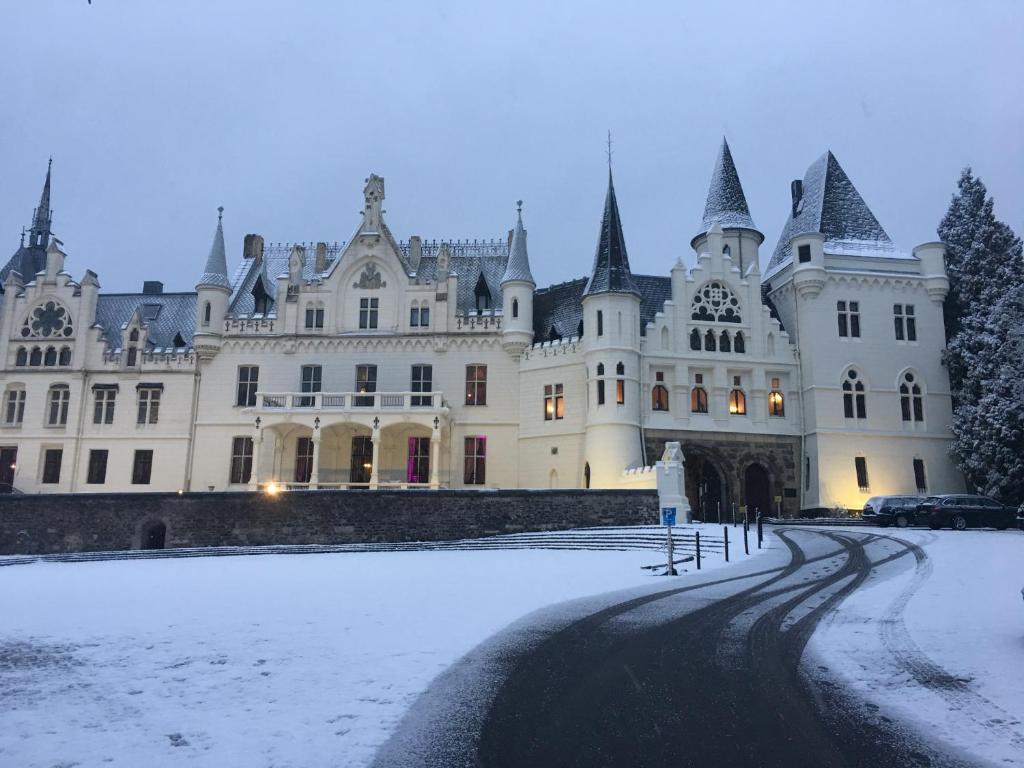 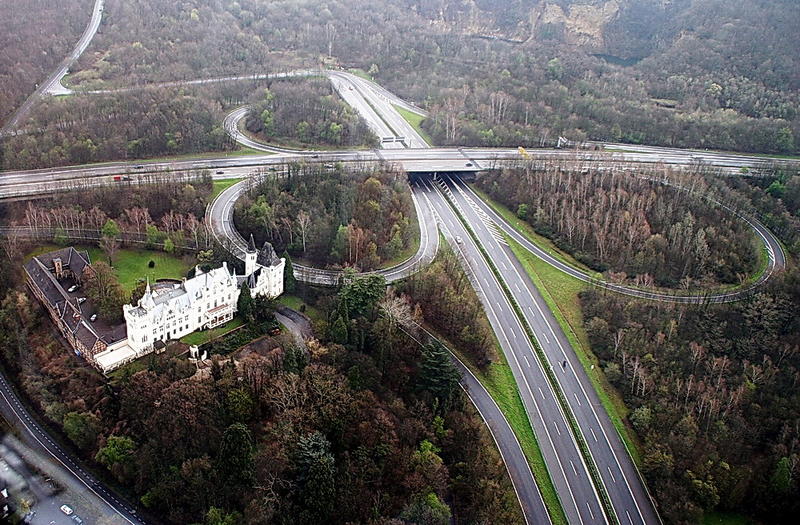