Hugenpoet Castle (pronounced “Hugenpoot” – see Dehlass-e) is a three-part water castle surrounded by trenches in the Kettwig district of Essen (North Rhine-Westphalia), in the immediate vicinity of Landsberg Castle. Its name can be interpreted as a “toad pusque,” which gives an indication of the swampy floodplains in the Ruhr Valley there. Since February 1985, the complex has been a listed building and now serves as a hotel restaurant.

The mansion is a free-standing building in the water on a rectangular floor plan. On its north side, two powerful, rectangular flanking towers rise with three storeys bearing curly hoods with eight-sided lanterns and weather flags. The brick building with corner quays stands on a base floor made of Haustein and is divided horizontally by sandstone insoles. A stone arch bridge leads to the flat mid-risalite with the portal from 1872. Above the entrance it shows the alliance coat of Frederick von Fürstenberg to Hugenpoet as well as his wife Anna-Franziska Countess Wolff Metternich to the canal.

In the course of renovations for use as a hotel, the park-side façade of the main house received a terrace extension in 1954, but the interior is still largely preserved in its original condition. These include the Troy fireplace and two other renaissance fireplaces with sandstone reliefs from 1560 to 1578, originally from Horst Castle, as well as the detached portal in the entrance hall and the baroque stairwell followed by black marble. The portal has curly explosive gable, crown and ball cier. On it you can see the coat of arms of Constantine Erasmus Betram of Nesselrode and his wife Maria Ambrosiana von Viermund as well as the year 1696 in the Architrav. 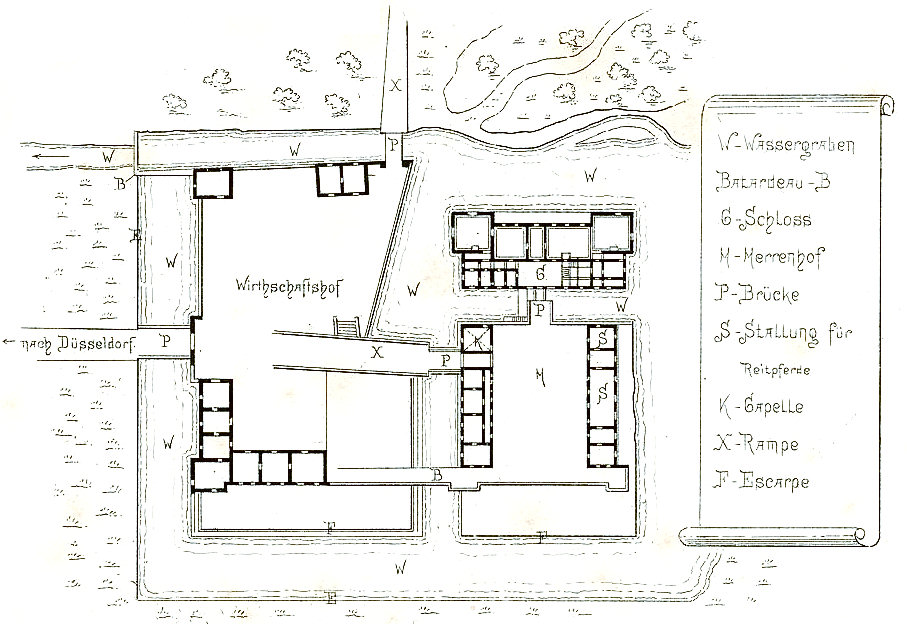 The inner stronghold is located in front of the mansion to the south and consists of two elongated buildings with forest roofs that limit a courtyard on its east and west sides. A flanking tower was to be built on the southern corners of the two simple, two-storey buildings made of pentones, but this plan was never fully implemented. Only the tower foundations were erected and are still preserved today. The crucifixion windows of the two wings of the building divide them into eight axles.

The builder of the forecourt was Konstantin Erasmus von Nesselrode zu Hugenpoet, whose coat of arms is located on the exterior of the façade above the archway of the portal. This is framed by two pilasters with ionic capitals bearing an Architrav. The western building of the inner entrance is located north of the entrance to the gate, the castle chapel, which has been detectable on Hugenpoet since the 18th century. Its interior was completely redesigned –, as were the other rooms of the inner stronghold – around 1880 in the style of historicism. 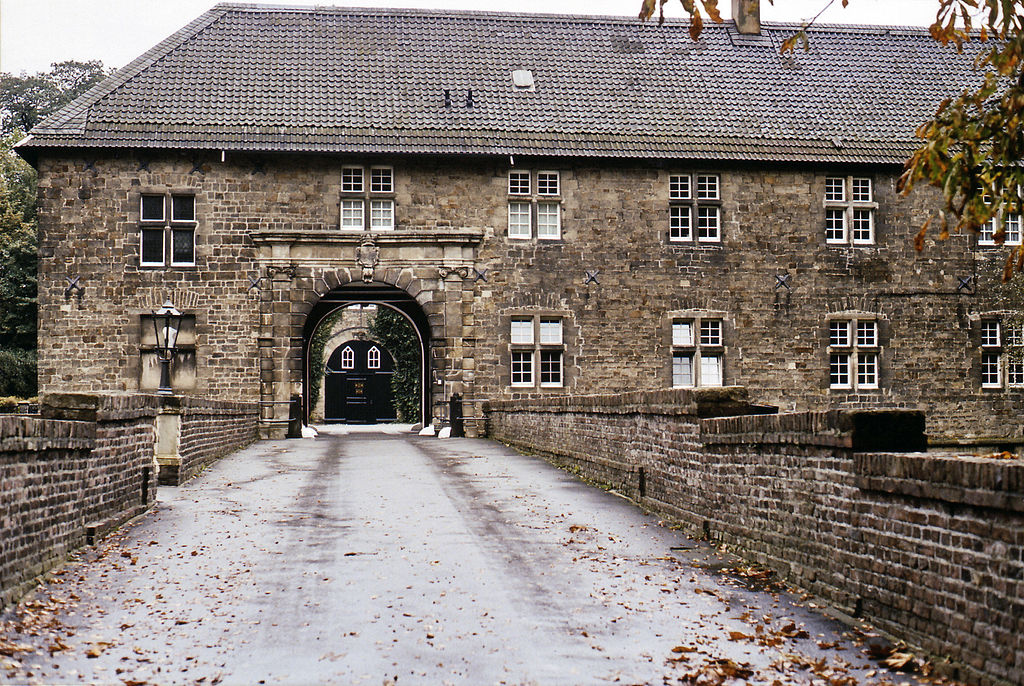 The inner stronghold (above)

The single-storey outer stronghold is located to the west of the other castle buildings. The freestanding portal is accessible via a stone arch bridge. It shows above the archway the coat of arms of the Nesselrode and Winkelhausen families, as well as the following inscription:

The rectangular south wing is bounded at its corner by a rectangular, single-storey tower. It is to be assumed that the tract, as is customary in the baroque period, should be juxtaposed with a symmetrical north wing, but this was never executed. Gun ranges in the masonry give an indication that the outer entrance was built using the structure of the old castle complex of 1509.

The connection to the inner stronghold is a ramp-like bridge built on a barrel vault.

During the Second World War, the castle buildings were home to services of the Wehrmacht, which were followed by refugee families after the end of the war. For a time, the ground floor of the main building also housed the exhibition of the Folkwang Museum in Essen, before the castle was handed over to its current use as a hotel restaurant by hotelier Kurt Neumann in 1955. In 1995, the Lübbert family took over the management of Hugenpoet Castle and expanded it further, especially in the restaurant area. In December 2013, the hotel was threatened with insolvency. The operating couple handed over the management in the same month to the owner Maximilian Freiherr von Fürstenberg, who took over the hotel and restaurant business. The 5-star castle hotel used to be one of the Leading Hotels of the World and is now a member of two hotel associations for privately run, independent hotels.