In the early years of the German occupation of Denmark, the Danish Sports Federation (DIF) was co-organising a wide range of sports competitions and matches with the German occupying power, which used the sport as a propaganda agent. Growing popular resistance and unrest ultimately led to the German regime slammed sport cooperation with Denmark, when Chancellor Adolf Hitler was unable to see the propaganda gains in a continuing sporting relationship with Denmark. After the end of World War II, DIF chose to lay a veil over the Danish-German sport cooperation during the war, and instead highlighted itself and prominent Danish sports personalities almost as part of the resistance movement.

Sport cooperation in the 1930s

The Danish-German sports championship during the 2nd World War II must be understood, first and foremost, in the context of the sporting cooperation that was built up in the years leading up to the outbreak of the war. After Hitler’s takeover of Power in 1933, the German state’s power chose to invest heavily in the propaganda aspect of sport. The huge investments of the Germans and the focus on elite sport fascinated many Danish sports leaders and athletes, including in particular the swimmers Ragnhild Hveger (1920-2011) and Jenny Kammersgaard (1918-1997).
In 1936 the Olympic Games were held in the German capital of Berlin, and the sporting event was very much helping to create close sporting cooperation between Denmark and Germany. Both the reporter Gunnar ‘ Nu ‘ Hansen (1905-1993) and the Danish sports magazine Idrætbladet brought many positive atmospheric reports from the Olympic arenas. After the OLYMPICS in 1936, Danish-German sporting events evolved to unprecedented size with rallies and national matches in many sports.

The occupation puts a temporary stop to the sport.

In almost all sports, Denmark and Germany had cooperation in the late 1930s. But with the German occupation of Denmark on 9 On April 1940, the sporting interaction was discontinued in the period from 14 September. April to the 5th August 1940, first of all because DIF for security reasons would prevent the possibility of anti-German demonstrations.

However, DIF was under constant pressure from several specialized federations who wished to return to the international conferences. At the same time, the occupying power put a lot of pressure on DIF because, for propaganda reasons, Germany wanted to resume sport cooperation in order to show the outside world that, despite the occupation, everyday life in Denmark could continue roughly as before. After a meeting in August 1940 between the occupying Power and the DIF, cooperation was resumed. This was probably not only due to the enormous pressure exerted by the special federations and the occupying power, but also because Denmark, in the context of sport cooperation with Germany, would receive considerable economic benefits.

Denmark as a showcase

During the occupation, sports competitions and national battles with Germany were held in a completely unknown scope. This was linked to the Germans taking a propaganda opportunity in a sporting relationship with the little ‘ Aryan ‘ nation from the north. Here you could see sweating athletes embrace each other and create a symbolic correlation between Denmark and Germany in a great Germanic spirit. Suddenly, many German sports stars went to Denmark, which impressed many fans, as they had rarely seen such famous sportsmen on Danish soil.

In the case of fencing, there were several sports competitions between Denmark and Germany. From 30 November to 1 December December 1940 there was a fencing in Copenhagen between the two countries where the Dannebrog hung side by side with the Swastika/Hakenkreuz flag, and the German national team welcomed the habit of ‘Heilen’/Hitler salute. The German fencing team was led by the SS General Reinhard Heydrich (1904-1942). 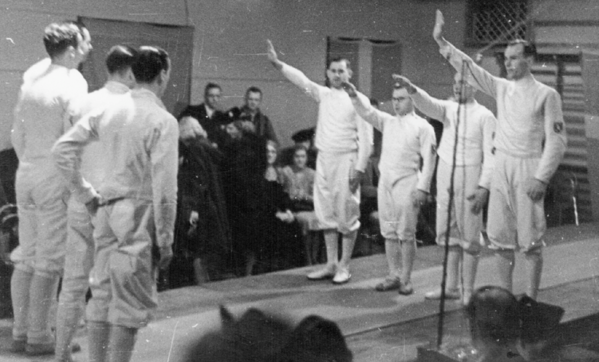 The Danish authorities, DIF and Danish sports stars welcomed the Danish-German sporting interaction. In the early 1930s and 1940s, Copenhagen’s Sportspark House laid the largest popular cooperation between Danes and Germans. Especially football matches had the German regime’s focus, as according to the Germans, it was particularly good entertainment that could help raise German morale in a war time. Football was also the most popular sport in all of Europe, and the Germans therefore saw football matches as an obvious propaganda opportunity.

Constitution Day of 5 June 1941 met a Danish joint team from Copenhagen clubs, the so-called competition, the Austrian master team Admira at Copenhagen Sports Park, where 12,500 spectators watched. After Austria’s annexation to Germany (‘ Anschluß ‘) on 13 March in 1938, the football team Admira was used several times in propaganda contexts by the German propaganda ministry. The Danish and German leadership had for some time feared a situation where the audience would make politically motivated riot against the cooperation. It should turn out that the audience’s reaction to this football match resulted in the Danish-German sporting interaction being greatly reduced.

The battle began with the Austrian team making Hitler salute to the German national anthem “Deutschland, Deutschland über alles”, to which they received Hitler salute back from the German soldiers in the audience. Here on the birthday of Danish democracy, the fears of Danish and German politicians became reality. The representatives of the occupying Powers were in the minority, and it exploited many Danish spectators. The German Heilen created anger, and the Danish defeat of 1-4 probably did not help in the mood either. The football match was intended to seal the friendship between the Danish and German people, but ended in riot and violent protests in the stands. The Danish spectators threw beer bottles against the German soldiers who, in a response, withdrew the bayonet. In the end, the Danish police had to escort several of the occupying force soldiers out of the stadium, and the episode resulted in the fact that the sport cooperation between Denmark and Germany then took place on a significantly smaller scale, as Hitler could no longer see the propaganda gains from cooperation.

Interpretation of sport cooperation after liberation in 1945

During Germany’s occupation of Denmark, in the early years, sport gained a strong symbolic value in attempting to demonstrate unity between the occupying and occupied Danish-German sports competitions and national matches. After the liberation on 5 On the other hand, in May 1945, Sport for Denmark was a means to demonstrate the opposite: a community between liberated and liberians. Already on 15 In May 1945, the first international football match after the liberation was held at the Aarhus Stadium in front of 12,000 spectators between a Danish team consisting of saboteurs and an English team of parachutisers.

After the liberation, Dansk Idrætsforbund chose to lay a veil over the Danish-German sports association during the occupation, and instead highlighted itself and prominent Danish sports personalities almost as part of the resistance movement. Most clearly it appears on the plaque in the sports house in Copenhagen at the current Gunnar Nu Hansen’s Square, where the engraved text reads: “PLAY BECAME SPORT – AND SPORT WAS DAAD 1940-1945”. 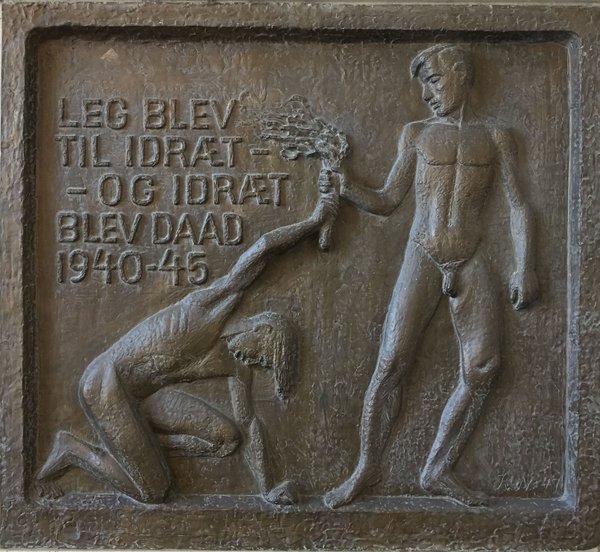 Plaque that adorn the entrance party to the Copenhagen Sports House (Idrætshuset i København) at Gunnar Nu Hansen’s Square. The message is that Danish sport fought against the occupying Power.

The reporter Gunnar ‘ Nu ‘ Hansen, who in the 1930s and early 1940s was very positive of the Danish-German sporting interaction, toned after the liberation of Denmark as a resistance man with free-range armbind (like a freedom fighter). The Danish swimming girl Inge Sørensen (1924-2011), who won the bronze medal in the 200 m breast swimming at the Berlin OLYMPICS in 1936, became a symbol of the rejection of Germany on the victory podium, when she did not regive the German Heilen/Hitler salute. The picture was after the end of 2. World War again and again used as a symbol of the Danish notion of opposition to German propaganda. 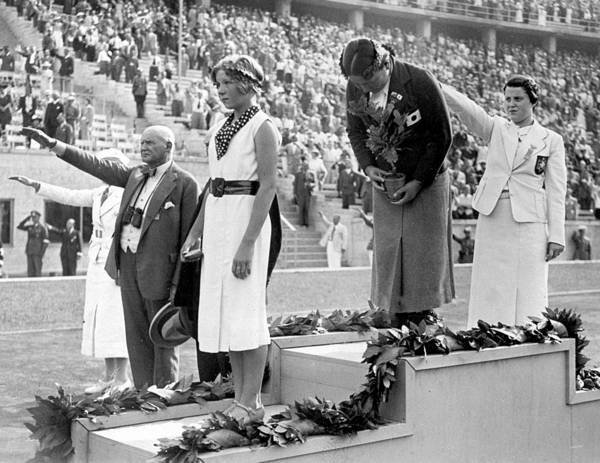 During Germany’s occupation of Denmark from 1940 to 1945, DIF constantly claimed that sports and politics had nothing to do with each other. The problem was simply that in Germany, under the leadership of Hitler, it was important propaganda to be able to hail and see the Swastika/Hakenkreuz flag at the international sports competitions, where they could sing both “Deutschland, Deutschland über Alles” and the NS Battle Song Horst Wessel. DIF and the Danes became the victim of a well-oiled NS propaganda machine that exploited sport as a showcase for the strong German nation. It was therefore high priority for DIF after the war to downplay the Danish-German sport cooperation during the occupation.

Take it with a grain of salt.