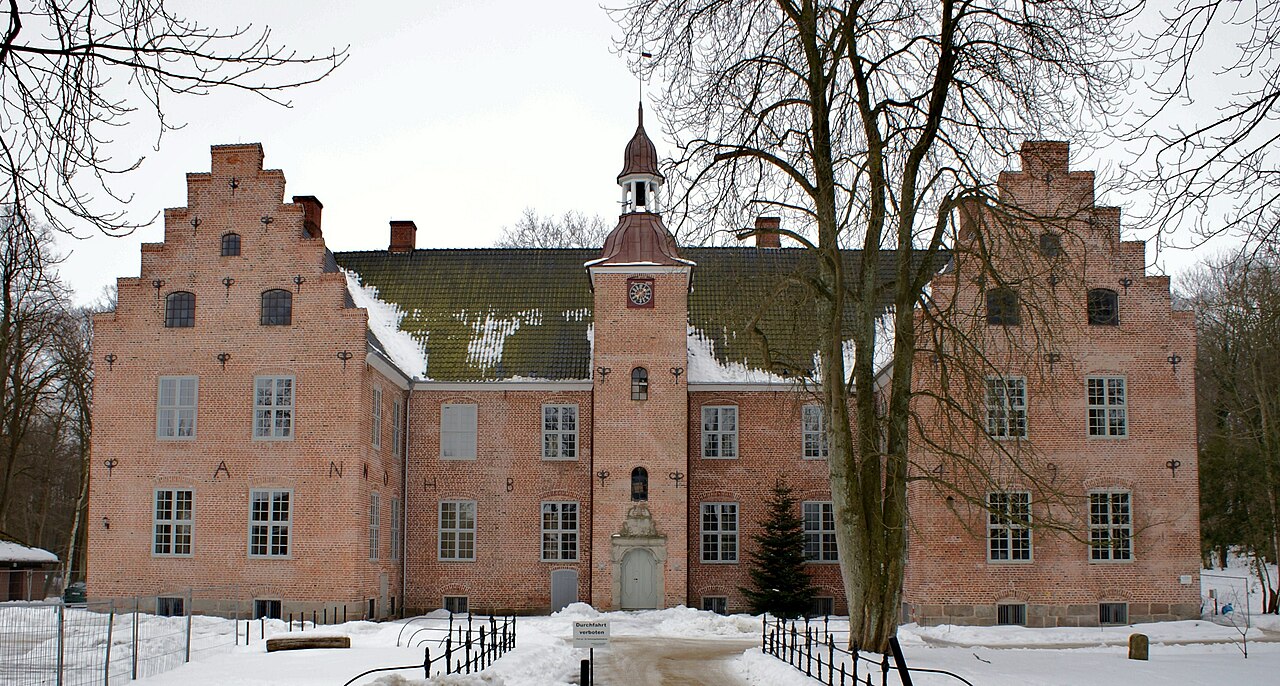 Hagen Castle in the municipality of Probsteierhagen near Kiel in Schleswig-Holstein is the manor house of the former nobleman’s estate of the same name. The 17th-century building has housed a cultural and event centre since 1969. After extensive renovation from 2007 to 2011, it has been open to visitors again since 2011.

A first mention of Hagen is documented in 1264 as indago comitis (“Hag des Grafen”) in the Kiel city book. At that time, the site served as a hunting lodge under the Counts of Schauenburg, from which the name of the later estate was derived.

The manor house Hagen was built for Hinrich Blome and Lucia von Pogwisch from 1647 to 1649. Hagen was built as a two-storey and three-winged building on a basement, in the middle is a slender stair tower, which also contains the main portal emphasized with sandstone decoration. From the south-facing garden facade stands out another wing of the building, which was added to the existing manor house in the middle of the 18th century, giving the castle an approximately Y-shaped floor plan.

The building was built at the transition of the Renaissance to the Baroque, a phase that took place in Holstein only after the Thirty Years’ War. The originally horseshoe-shaped structure with its uniform window layout is already baroque, but there is a lack of time-typical jewellery and the strict step gables and the stair tower crowned with a lantern still refer to earlier building traditions of the Duchy. The manor house was once surrounded by water ditches, which reinforced the rather defensive character. The trenches are now drained and filled on the farm side, still partially recognizable on the southern side. In contrast to the austere exterior of the manor house, the interior of the symmetrical divided building was already more clearly influenced by the Baroque era. Until the beginning of the 18th century, the rooms of the castle were given elaborate stucco decoration, supraports and decorative fireplaces, some of which have been preserved to the present day. The so-called Pogwisch room is part of the furnishings, whose baroque wall version from around 1725 is unique in a Schleswig-Holstein manor house. In the Pogwisch room, the murals were extensively restored from 2009 to 2011 with high financial support from the federal and state governments. Visitors today have the opportunity to visit the restored rooms of the manor house, such as the so-called Blome Room and the fireplace room.

Other Castles in Schleswig-Holstein