Kleptoparasitism (literally, parasitism by theft) is a form of feeding in which one animal takes prey or other food that was caught, collected, or otherwise prepared by another animal, including stored food. Examples of this last case include cuckoo bees, which lay their eggs on the pollen masses made by other bees, or the hosts of parasitic or parasitoid wasps. The term is also used to describe the stealing of nest material or other inanimate objects from one animal by another.

The kleptoparasite gains prey or objects not otherwise obtainable or which otherwise require time and effort. However, the kleptoparasite might be injured by the victim in cases in which the latter defends its prey. Kleptopredation is the practice of choosing prey that has recently fed.

Animals that have extraordinarily specialized feeding methods are often targets of kleptoparasitism. For example, oystercatchers are unusual in being able to break through the shells of mussels; adult oystercatchers suffer intraspecific kleptoparasitism from juveniles that are not yet strong or skillful enough to open mussels easily. A fox or a coyote could lose its kill to a brown bear, gray wolf, or even a bald eagle. Diving birds that bring their prey to the surface suffer interspecific kleptoparasitism from gulls, which are unable to fetch fish from the sea floor themselves. Chinstrap penguins also actively engage in kleptoparasitism, being known to steal rocks and other nest materials from members of their colony for use in their own nest.

This gull is probably attempting to steal food from a sea otter. 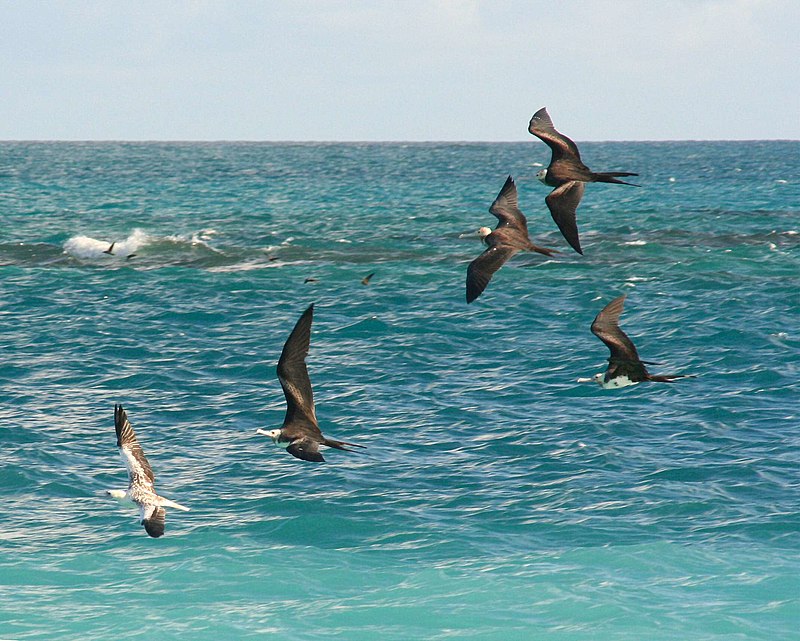 Great frigatebirds chasing a red-footed booby to steal its food.

Human intraspecific kleptoparasitism (humans taking food from other humans) is common in times of famine.

In falconry, humans use trained birds of prey for hunting. Humans use tethered cormorants for fishing.

One researcher saw humans chasing lions from captured prey in Waza National Park, Cameroon in 2006. Interviews with Bororo herdsmen suggest this behaviour, which possibly contributes to declining lion populations in the park, is more widespread than recognised.