Hundisburg Castle is one of the most important rural baroque castles in Saxony-Anhalt and is located in Hundisburg, a southern district of Haldensleben. It was partially destroyed by fire on 28 November 1945 and has been under reconstruction since 1994.

Originally there was a castle on the site, which was acquired by Archbishop Ludolph of Magdeburg for the archdiocese between 1196 and 1205. In 1452 Hundisburg came into the possession of the family of Alvensleben, who in the 16th century had the estate expanded into a Renaissance castle. Destroyed in the Thirty Years’ War, the castle was initially rebuilt in the restored style. 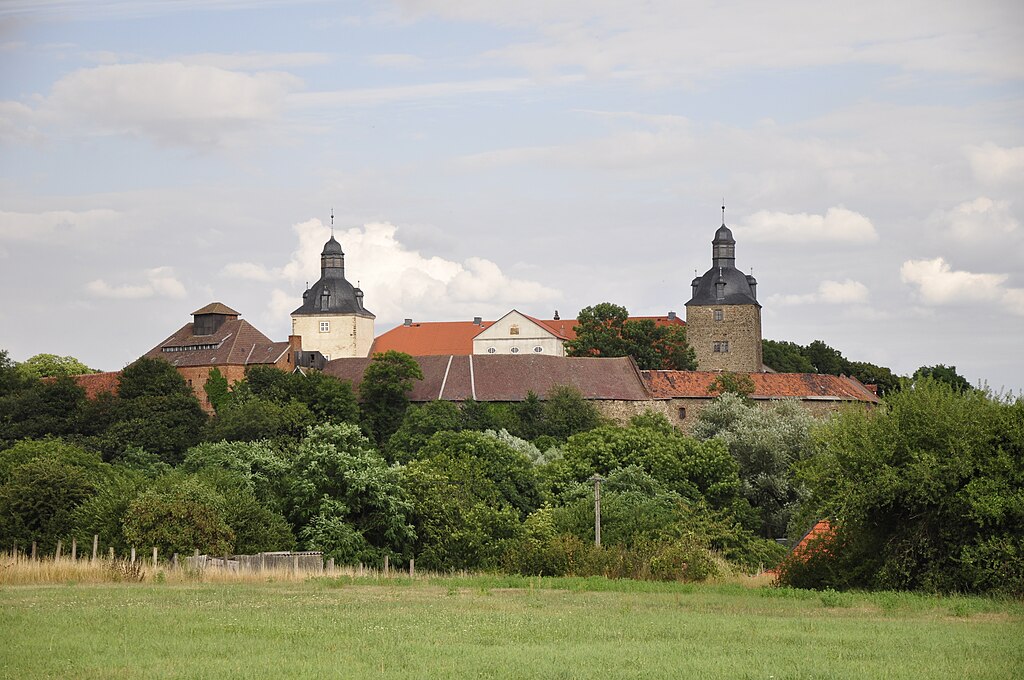 The Hundisburger Schlossberg is a distinctive “ground spur” formed by the confluence of the valleys of Beber and Garbe. Archaeological finds point to settlement already during the Neolithic period. The mountain will therefore have been appropriately fortified at an early stage. The castle took its architectural origins from the Hunoldäsburg built at the beginning of the 12th century on an almost circular floor plan on the top of the spur. From this period, large parts of the ring wall and the bergfried have been preserved as the south tower of the castle. Three other stone buildings can be found along the inside of the ring wall, for example clearly visible in the southern part of the castle barn. The internal structure of the courtyard and the location of the medieval castle chapel have not yet been clarified. The castle was probably separated by a ditch in the area of the later Upper Lustgarten from a suburban settlement, which had been located on the Schlossberg in the area of the later Upper Lustgarten until the construction of the baroque garden around 1704.

The castle was in the possession of the state and served the Archdiocese of Magdeburg for territorial defense and for the control of a route of the Lüneburg Army Road and its Beverfurt. Sieges took place in 1213 by Emperor Otto IV, in 1278 by Duke Albert I of Brunswick and in 1319 by Prince Henry of Mecklenburg, which in the latter two cases ended with the conquest of the castle.

The rooms in the castle have been preserved in part with remnants of their once sophisticated wall painting, which shows an outline of the wall surfaces with columns and cornices, followed by an ornamental treatment of the vaulted surfaces. Remains of the “Old Castle”, i.e. exterior walls and door walls contained in it, have been preserved in the building of the baroque castle, as well as the two lower floors of the “New Works” on the south side of the castle courtyard, which are yard-edge buildings from the 18th century. As in the case of the castle, however, the grandiose transformation of the entire complex into baroque prevents the whole complex from gaining a complete picture of the appearance of the renaissance castle in retrospect. However, the presence and location of the old castle gardens is certainly known.

The castle garden 2010 (above and below)

The Thirty Years’ War also affected the castle. Hundisburg suffered especially in 1630, when the castle was the headquarters of Pappenheim during the siege of Haldensleben. In 1691, Johann Friedrich II of Alvensleben had received Hundisburg from a division of inheritance and two years later began the conversion and construction of the castle and garden on the model of the summer residence of Schloss Salzdahlum in Braunschweig. The construction of the castle lasted until 1712, the garden was completed in 1719. The architect was Hermann Korb, the master builder of Duke Anton Ulrich von Braunschweig-Wolfenbüttel. The plans for the reconstruction were mainly from Johann Balthasar Lauterbach, who had already built the main building in Salzdahlum, who had already died in 1694. The stucco work was carried out by Jacob Perincetti, the Duke’s court stucco. The Duke himself, who was good friends with his council of Alvensleben, is said to have participated in the planning.

Salzdahlum was a model for the design of the castle’s garden facade with the Venetian-style double-storey loggias [?]. The two towers gave the Corps de Logis a very monumental effect opposite the garden and the surrounding landscape. The main room sequence with garden hall, stairwell and ballroom, which has been lost since the castle fire in 1945, was also extremely elaborate and was designed with the type of the so-called Kaisertreppe “highly modern”. The two-storey castle chapel was similar to that of Salzdahlum and Blankenburg; the tombs bordered directly on the living quarters. The Corps de Logis was placed in front of the old courtyard to the west, and the entire outer courtyard building was also modernised and unified in its roof landscape.

The baroque garden was completely redesigned during elaborate terracing of the castle hill upstream and the relocation of some courtyards of the village directly at the castle and was at the height of its design in the middle of the 18th century. With its richly ornamented, statue-studded parterres, hedge-boschains, a maze and a garden theatre, grottoes, water games and an extensive collection of exotic plants, it was equal to the castle in effort and splendour and for the region unique. The master gardener for the new garden had been trained at Schloss Salzdahlum. Over the last three centuries, the garden, which is of importance in terms of art history, has undergone more changes than the castle building. After initially in-sectional redesigns, the garden was transformed from 1811 under Johann Gottlob Nathusius into the nucleus of an Althaldensleben and Hundisburg-combining landscape park and according to the sense of style of the 19th century. Nevertheless, the powerful substructions of the plant and thus its area division as well as with the avenues essential components of the plantings remained.

After 1945, the garden was completely alienated from its original purpose. Most recently, for example, there was a football pitch on the grounds of the Upper Lustgarten and an orchard in the Lower Lustgarten. Since the original appearance of the garden and its history are well researched and documented, measures to reconstruct the complex have been taken since 1991. The decay of the castle could already be stopped in large areas, the northern part of the Corps de Logis, which burned out in 1945, was already reconstructed in its exterior together with the north tower. Today, the castle and baroque garden belong to the network Garden Dreams of Saxony-Anhalt. 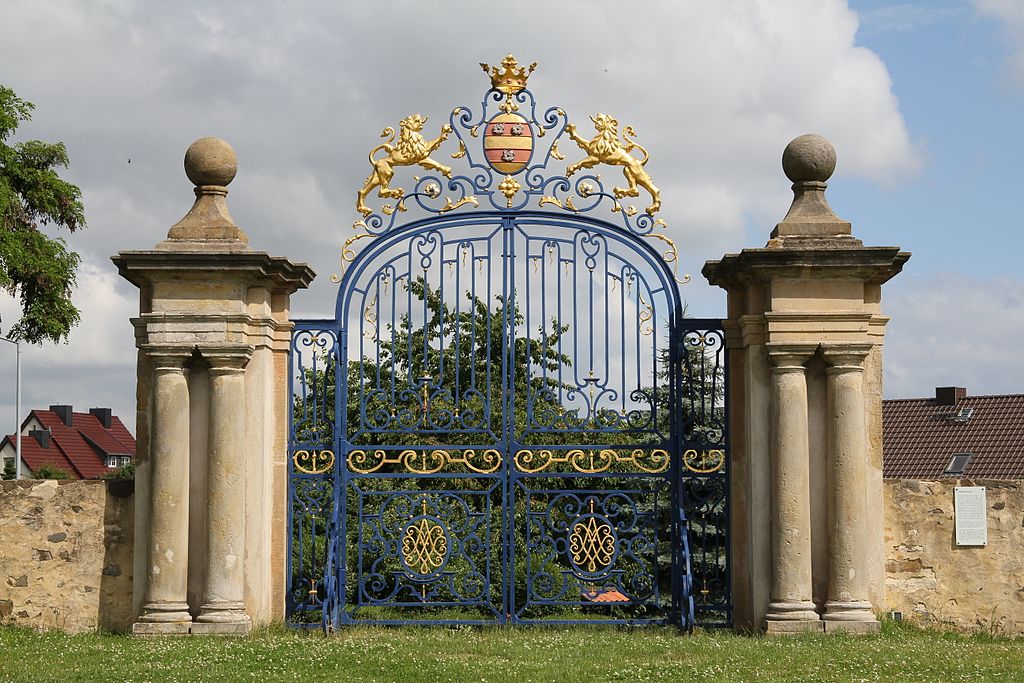 In the 1960s, attempts were made unsuccessfully to rebuild. Castle buildings and annexes were used by a farm in state hands (People’s Estate). Until 1991, the ruins were left to their own devices. In 1994, the town of Haldensleben acquired the castle, baroque garden and landscape park. The 100-hectare park is a listed cultural monument. In contrast to the baroque garden of the castle, the park is designed in the style of an English landscape garden. The main design element is a series of parallel meadow spaces separated by tree groups, which are connected by visual axes. Since the takeover of the Schloss-Park complex by the city, it has been restored in a historic way. Since 2001, the restored rooms have been showing the collection of the Magdeburg sculptor Heinrich Apel, which contains not only his own works but also some works by his teachers, as well as a historical library. The historic stairwell – one of the first baroque in Germany – has now been completed in shell. In 2011 and 2012 the brewery was rebuilt and beer is brewed again in a historic place.

Hundisburg Castle was in German Democratic Republic (East Germany), before the German reunification. 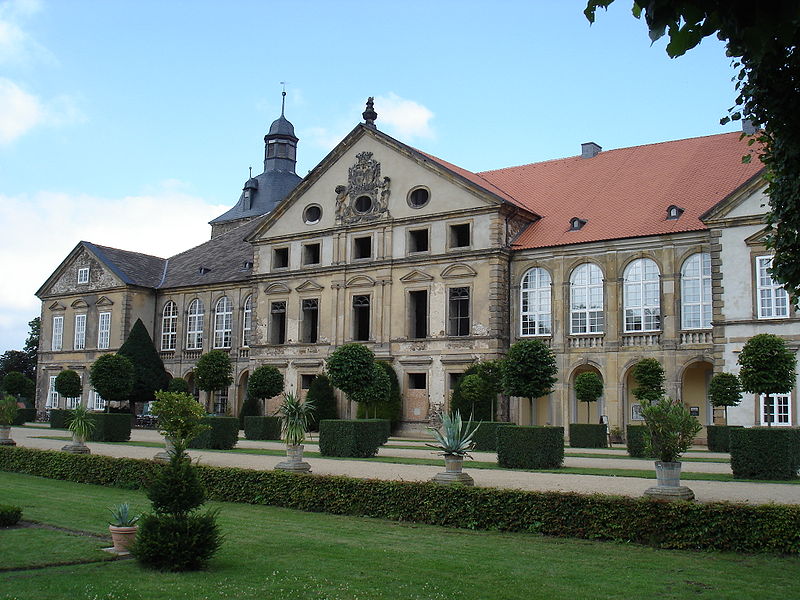 Other castles in Saxony-Anhalt: