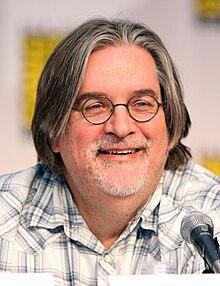 One of Jeffrey Epstein’s public accusers claims she had to give a foot massage to The Simpsons creator Matt Groening while on the rich criminal’s private jet, though she was repulsed by the cartoonist’s “crusty toes,” according to newly-released court documents. Hours prior to Epstein’s August 10th death, more than 2,000 pages of documents were released, related to a since-settled lawsuit against Epstein’s ex-girlfriend by Virginia Giuffre, one of his accusers. The records contain graphic allegations against Epstein, as well as the transcript of a 2016 deposition of the millionaire in which he repeatedly refused to answer questions to avoid incriminating himself. According to the documents, Giuffre alleges she met Groening aboard Epstein’s private plane, dubbed elsewhere as the “Lolita Express,” and that he asked her to give the cartoonist a foot massage during their flight from Carmel, California, to Los Angeles. Giuffre, 35, claims the incident occurred roughly 20 years ago, when she was 16.

“I was enjoying our conversation, when Jeffrey insisted that I give Matt a foot massage throughout the duration of the short flight,” Giuffre alleges in the documents. “I never turned down a client but when I saw the shape of his feet, I nearly threw up at the thought of having to touch them.”

Normies Are Getting Red Pilled #ClintonBodyCount