Ronneburg is both a castle and a municipality in the district of Main-Kinzig, in Hessen, Germany. The town is most notable for being the site of Ronneburg castle.

The castle and the surrounding town were first mentioned in a historical context in the year 1258, and other sources may refer to it as early as 1231. The castle’s earlier names, Raneburg, and also Roneburg, likely derive from the old High German word “Rone,” which means a fallen tree. This is likely a reference to the castle’s attached palisades.

As the Ysenburg-Büdingen family were Calvinists, they allowed Protestant exiles to stay at the castle, and for a while, the castle was a haven for many other types of religious refugees, such as Jews and Gypsies. In 1736 Nicolaus Ludwig Zinzendorf took over the castle, and made it into a place of refuge for members of the Protestant Moravian Church. After two years, the castle could not accommodate the number of people who came to see it, and the Moravians founded another congregation, Herrnhaag, on top of a nearby hill near Buedingen.

In June 2004 the castle was sold by Prince Wolfgang Ernst II von Ysenburg-Büdingen to baron Joachim Benedikt von Herman auf Wain, a nephew of princess Leonille von Ysenburg-Büdingen. It hosts a restaurant, a gift shop, and regular medieval festivals. Visitors may tour the castle on a daily basis. The tower provides excellent views of the Frankfurt skyline. 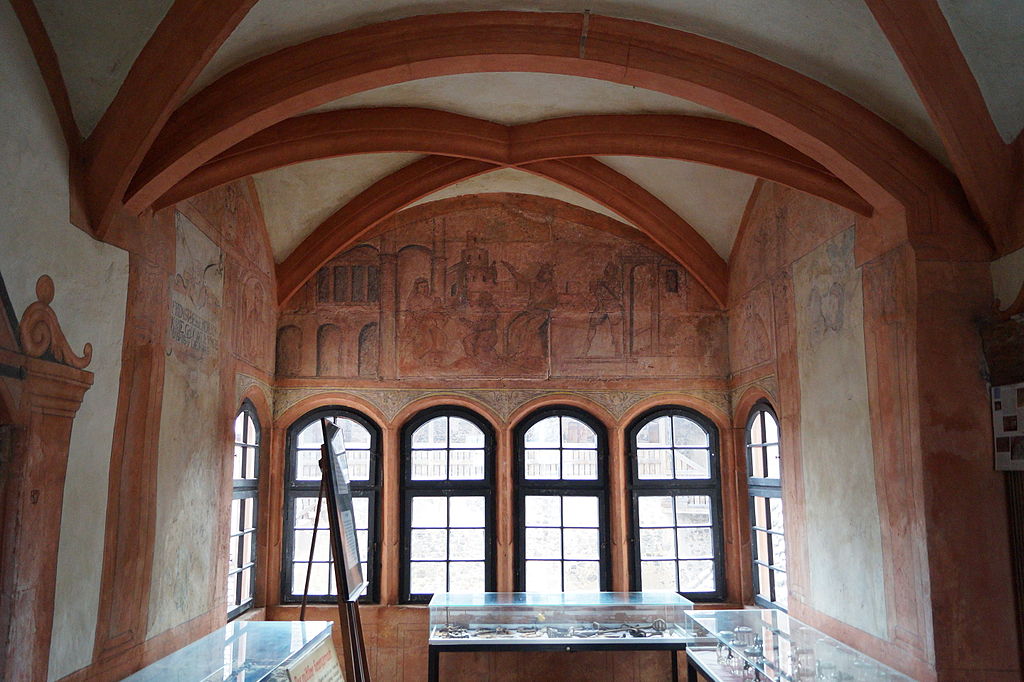 The town is built near a steep basalt cone, on top of which a castle was built in the 13th century. Because of this, the area is called the “Ronneburger Hügelland,” the “Ronneburg Hill Country.” The castle, and the hill its sits on top of, can be seen in the town’s coat of arms. The municipality consists of three villages: Neuwiedermuß (pop. 650), Altwiedermus (pop. 750), and Hüttengesäß (pop. 2200).

Hüttengesäß first appears in historical records during the 13th century under the control of the monastery of Sebold. In later times possession of Hüttengesäß passed with the castle. In 1643 Wiedermus suffered destruction at the same time the castle was sacked (see below) and was later rebuilt. The three villages have different endings to their names because in the past they had been divided among Prussia (Neuwiedermuß and Hüttengesäß) and the Grand Duchy of Hesse (Altwiedermus) which had different spelling conventions. 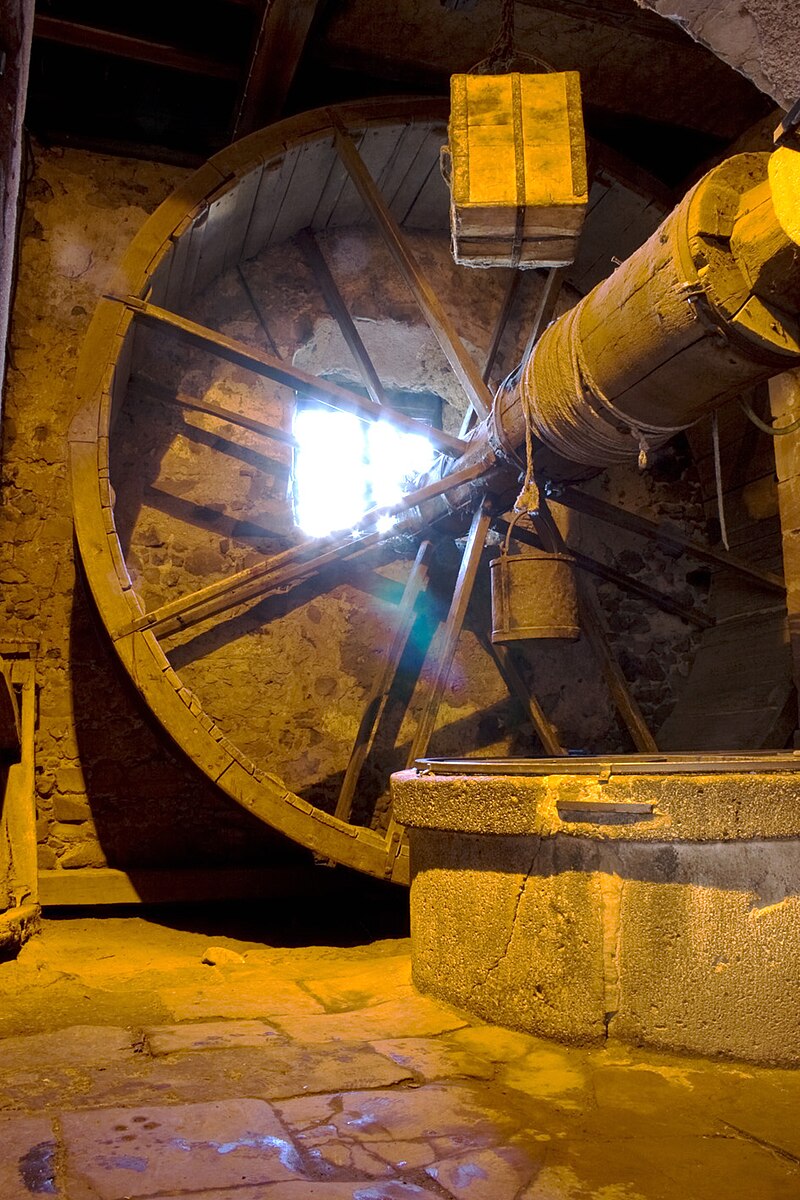 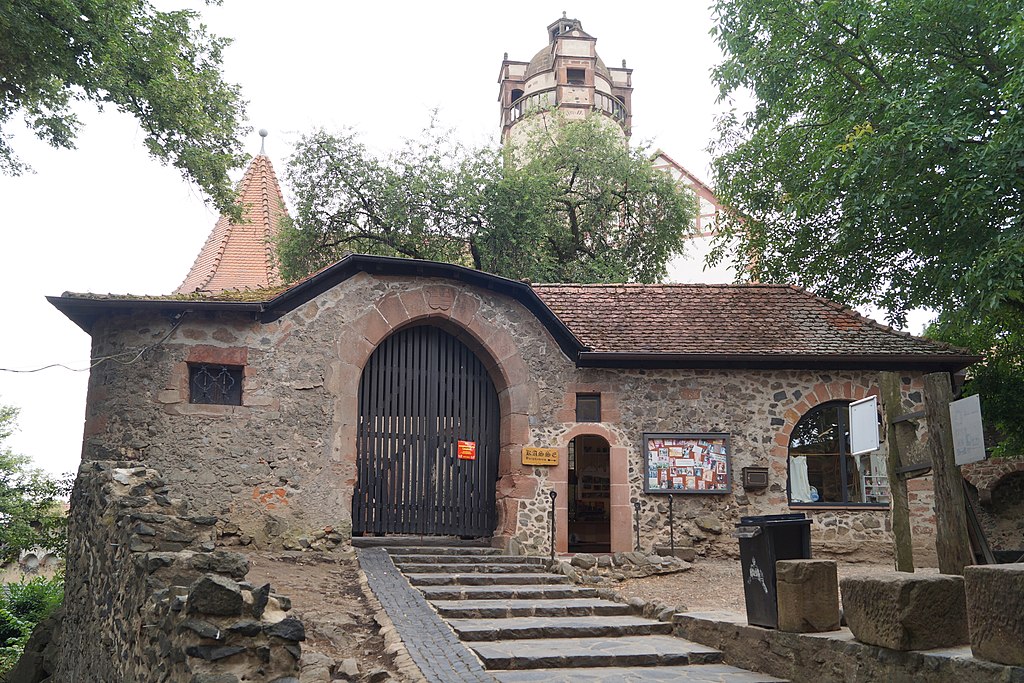 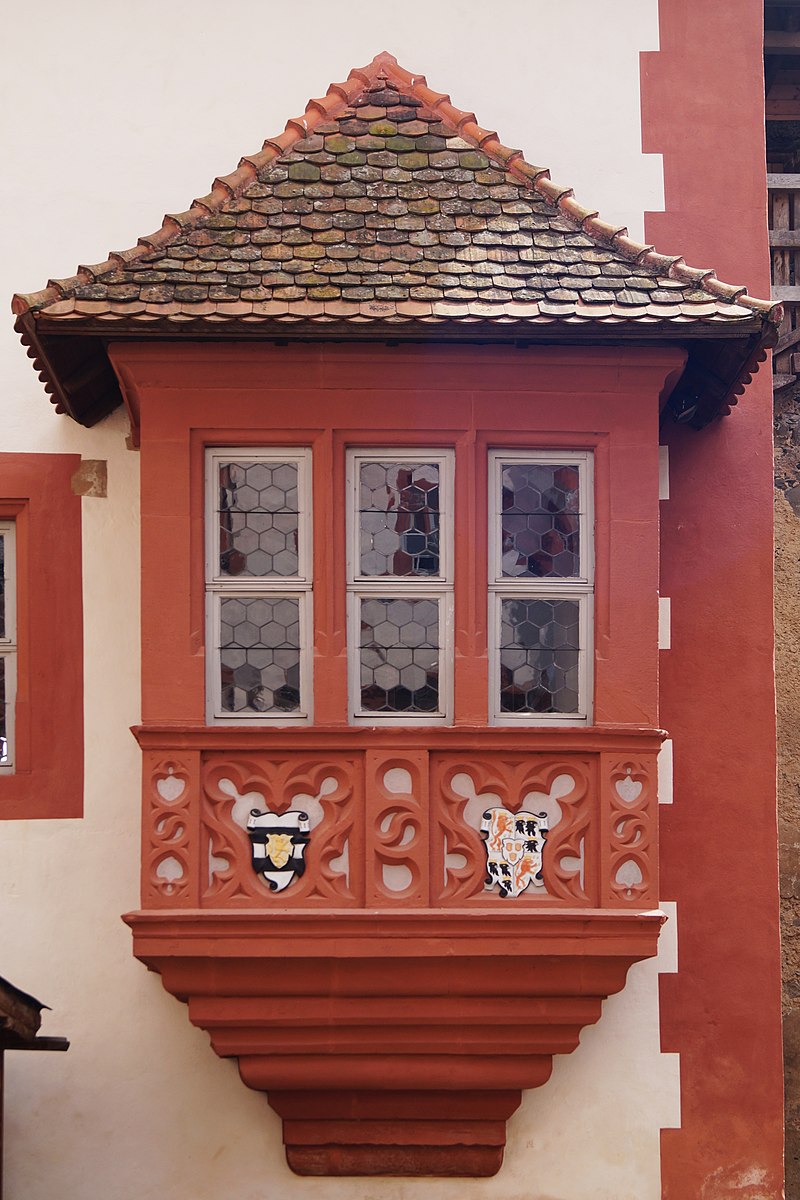 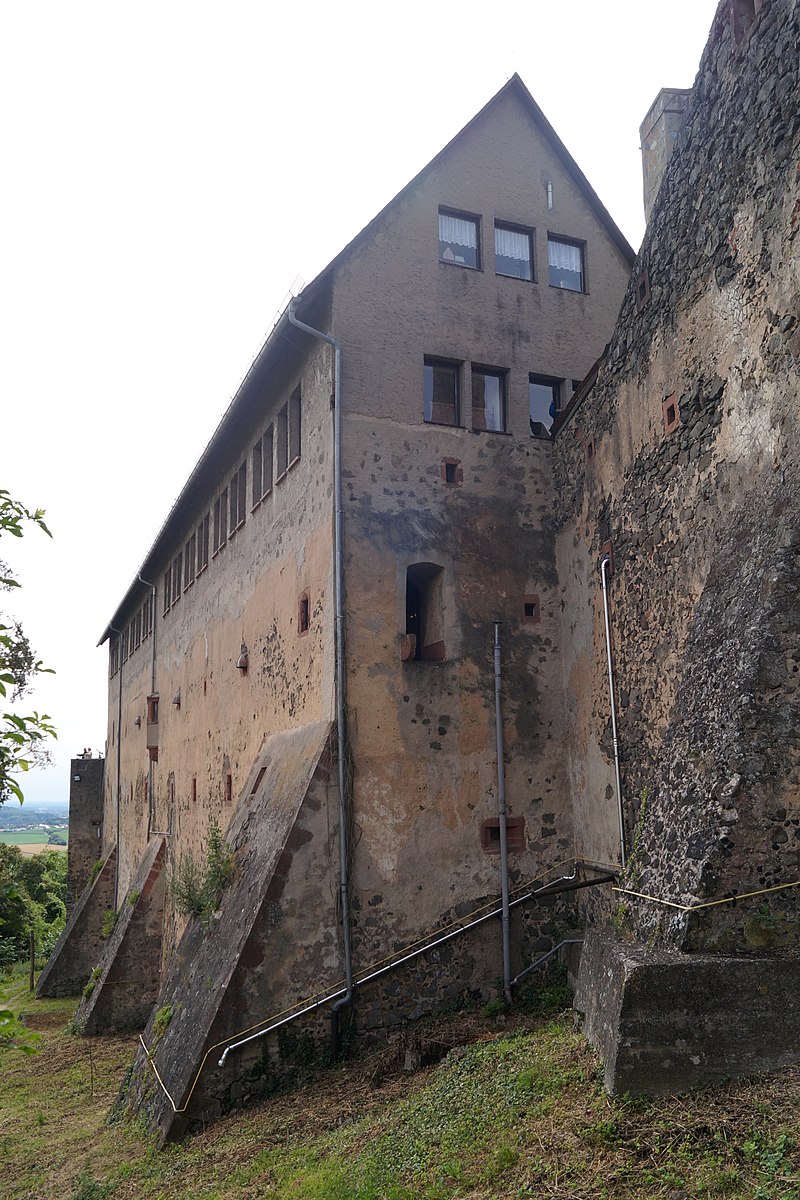 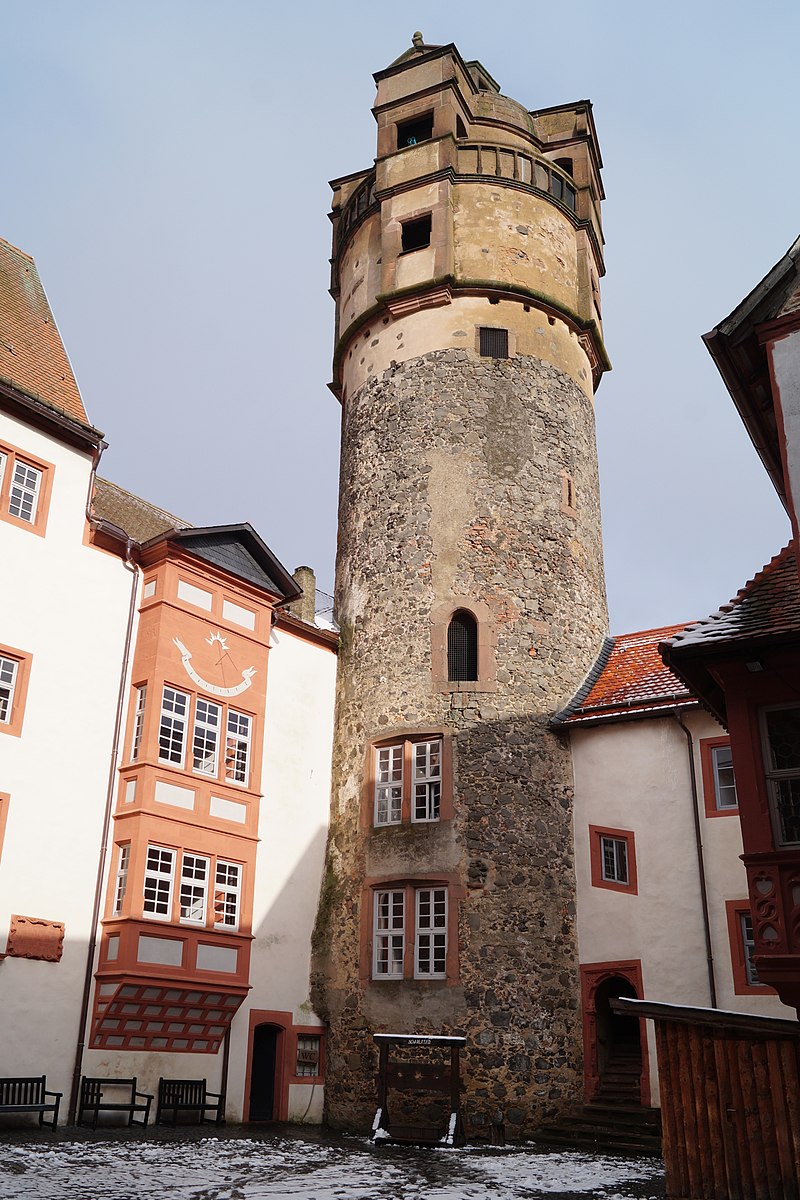 The 32-metre-high tower has a round floor plan with a diameter of just over eight metres. 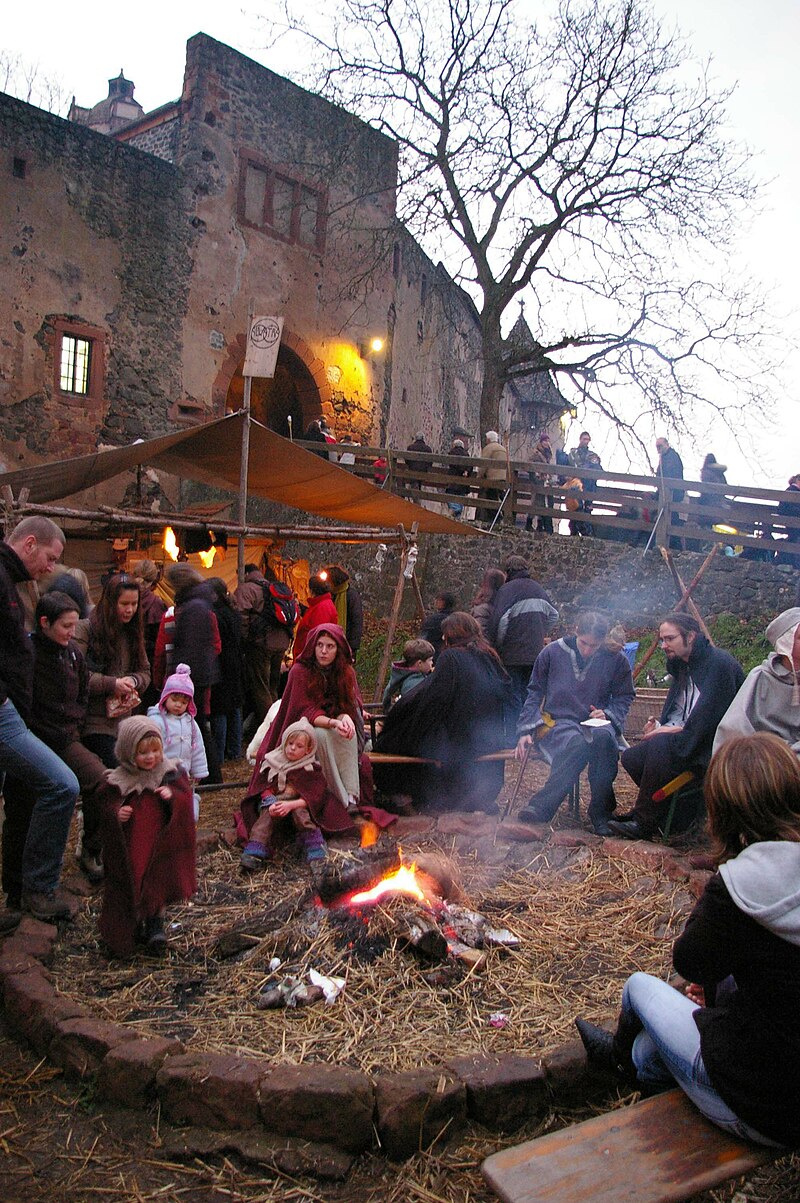 Other Castles in Hesse