Tom Kristensen (born 7 July 1967) is a Danish former racing driver. He holds the record for the most wins at the 24 Hours of Le Mans with nine, six of which were consecutive (from 2000 to 2005). In 1997, he won the race with the Joest Racing team, driving a Tom Walkinshaw Racing-designed and Porsche-powered WSC95, after being a late inclusion in the team following Davy Jones‘ accident that eventually ruled him out of the race. All of his wins since then have come driving an Audi prototype, except in 2003, when he drove a Bentley prototype. In both 1999 and 2007 Kristensen’s team crashed out of comfortable leads in the closing hours of the race. He is considered by many to be the greatest driver ever to have raced in the 24 Hours of Le Mans, earning the nickname “Mr Le Mans”. Elsewhere Kristensen also holds the record for most wins at the 12 Hours of Sebring with a total of six.

In August 2014, Kristensen was appointed Knight of the Order of the Dannebrog by the Queen of Denmark. In January 2018 he was inducted into the Danish Sports Hall of Fame. 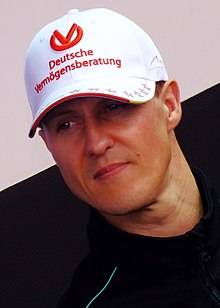 listen); born 3 January 1969) is a retired German racing driver who raced in Formula One for Jordan Grand Prix, Benetton and Ferrari, where he spent most of his career, as well as for Mercedes upon his return to the sport. Widely regarded as one of the greatest Formula One drivers ever, and regarded by some as the greatest of all time, Schumacher is the only driver in history to win seven Formula One World Championships, five of which he won consecutively. The most successful driver in the history of the sport, Schumacher holds the records for the most World Championship titles (7), the most Grand Prix wins (91), the most fastest laps (77) and the most races won in a single season (13), and according to the official Formula One website (Formula1.com), Schumacher was “statistically the greatest driver the sport has ever seen” at the time of his retirement from the sport.

After success in karting as a child, Schumacher won titles in Formula König and Formula Three before joining Mercedes in the World Sportscar Championship. In 1991 his Mercedes-funded race debut for the Jordan Formula One team resulted in Schumacher being signed by Benetton for the rest of that season. He finished third in 1992 and fourth in 1993, before becoming the first German World Drivers’ Champion in 1994 by one point over Damon Hill, albeit in controversial circumstances. In 1995 he repeated the success, this time with a greater margin. In 1996 Schumacher moved to Ferrari, who had last won the Drivers’ Championship in 1979, and helped them transform into the most successful team in Formula One history, as he came close to winning the 1997 and 1998 titles, before breaking his leg at the 1999 British Grand Prix, ending another title run.

Schumacher won five consecutive drivers’ titles from 2000 to 2004, including an unprecedented sixth and seventh title. In 2002 Schumacher won the title with a record six races remaining and finished on the podium in every race. In 2004 Schumacher won twelve out of the first thirteen races and went on to win a record 13 times as he won his final title. Schumacher retired from Formula One in 2006, after finishing runner-up to Renault‘s Fernando Alonso. Schumacher returned to Formula One in 2010 with Mercedes. He produced the fastest qualifying time at the 2012 Monaco Grand Prix, and achieved his only podium on his return at the 2012 European Grand Prix, where he finished third. In October 2012 Schumacher announced he would retire for a second time at the end of the season.

His career was frequently controversial, as he was twice involved in collisions in the final race of a season that determined the outcome of the World Championship, with Damon Hill in 1994 in Adelaide, and with Jacques Villeneuve in 1997 in Jerez. Schumacher is an ambassador for UNESCO and has been involved in numerous humanitarian efforts throughout his life, donating tens of millions of dollars to charity. Schumacher and his younger brother, Ralf, are the only siblings to win races in Formula One, and they were the first brothers to finish 1st and 2nd in the same race, a feat they repeated in four subsequent races.

On 29 December 2013 Schumacher suffered a traumatic brain injury in a skiing accident. He was placed in a medically induced coma for six months until 16 June 2014. He left the hospital in Grenoble for further rehabilitation at the University Hospital of Lausanne.  On 9 September 2014, Schumacher was relocated to his home where he continues to receive medical treatment and rehabilitation privately. As of 2016, he remained unable to walk or stand, and in July 2019, former Ferrari manager, Jean Todt said that Schumacher was making “good progress” but also “struggles to communicate”.