One Race Films (also simply known as One Race Productions) is an American film and multimedia production company. It is based in Studio City, California, and primarily produces feature films. Through its subsidiaries Tigon Studios and Racetrack Records, the company also produces video games and houses a record label. One Race has currently released a total of 15 feature films, all of which star Vin Diesel, who founded the company in 1995.

As of October 2017, its feature films have grossed over $3 billion worldwide, with a $231.3 million average gross per film. The company’s films, especially in The Fast and the Furious franchise, rank among the highest grossing of all time, while the series itself is among the highest-grossing of all time. Although the studio has traditionally made action films, Diesel has also featured in dramas and independent films. The studio’s films are typically distributed by Universal Pictures.

Mark Sinclair (born July 18, 1967), better known as Vin Diesel, is an American actor, producer, director, and screenwriter. He rose to international fame with his role as Dominic Toretto in The Fast and the Furious franchise.

Diesel began his career in 1990, but initially struggled to gain roles until he created and starred in the short film Multi-Facial (1995), which attracted the attention of director Steven Spielberg, who was developing his film Saving Private Ryan. Spielberg re-wrote elements of the film to allow Diesel to appear in it, which helped kickstart his career. 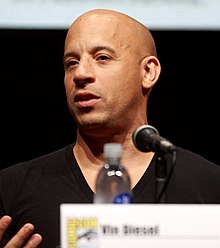 Diesel has stated that he is “of ambiguous ethnicity”.

His mother has English, German, and Scottish roots. He has never met his biological father, and has stated that “all I know from my mother is that I have connections to many different cultures”.

Diesel has self-identified as “definitely a person of color”, and has stated that his parents’ relationship would have been illegal in parts of the United States due to anti-miscegenation laws.

He was raised in New York City by his Caucasian mother and African-American stepfather, Irving H. Vincent, an acting instructor and theater manager.

Diesel made his stage debut at age seven when he appeared in the children’s play Dinosaur Door, written by Barbara Garson. The play was produced at Theater for the New City in New York’s Greenwich Village. His involvement in the play came about when he, his brother and some friends had broken into the Theater for the New City space on Jane Street with the intent to vandalize it. They were confronted by the theater’s artistic director, Crystal Field, who offered them roles in the upcoming show instead of calling the police. Diesel remained involved with the theater throughout adolescence, going on to attend NYC’s Hunter College, where studies in creative writing led him to begin screenwriting.

He has identified himself as a “multi-faceted” actor.

He has expressed his love for the Dominican Republic and how he relates to its multicultural facets.

People of mixed race almost never look as- or identify with- white people, they will most often resent white people, because they themselves feel inferior to the white people around them. From lack of success in life when competing on equal terms (with whites), to most often not living up to white people’s beauty standards etc., mixed race people and many colored people in general live in opposition to their white host. Jews are properly the best example of that. This is only fueled further by Cultural Marxists/anti-white propaganda.

Art Is a Weapon