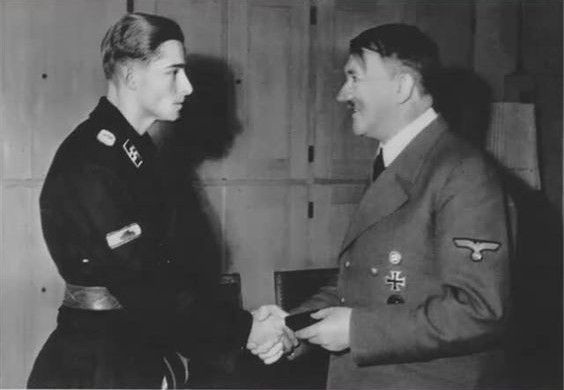 Joachim Peiper (30 January 1915 – 14 July 1976), also known as Jochen Peiper, was a Waffen-SS officer, most known for alleged involvement in the Malmedy massacre.

Peiper fought on both the Eastern Front and Western Front. He was personal adjutant to Heinrich Himmler between November 1940 and August 1941. Regarding the Malmedy massacre, see the article on this.

After the war, after release from prison, Peiper worked for both Porsche and Volkswagen, before moving to France, where he translated books from English to German.

In 1974, he was identified by a former Communist resistance member of the region who issued a report for the French Communist Party. In 1976, a Communist historian, investigating the Gestapo archives, found the Peiper file. Peiper received threats that his house would be burned down and his dogs killed. On receipt of these threats, Peiper, sent his family to Germany. During the night of 13/14 July 1976 (Bastille Day), Peiper’s home was attacked. In the ruins, Peiper’s charred corpse was found. Attackers had thrown firebombs, including at least one Molotov cocktail, at the house to start the fire, which arson specialists found had been set in three locations at once. The police investigation concluded that Peiper had died of smoke inhalation while attempting to save valuables and firing on his attackers. All three of Peiper’s dogs had been wounded by the attackers.

Pentagon Commemorated the Battle of the Bulge with a Photo of Waffen-SS Hero Jochen Peiper.

The Race for Belgorod

About Joachim Peiper I