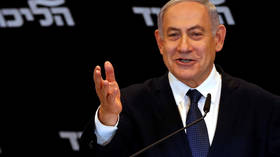 Netanyahu submitted the request to Knesset Speaker Yuli Edelstein on Wednesday night, stressing that he was not asking for “everlasting immunity.”