The Freikorps Danmark (called Frikorps Danmark by the Danes, sometimes listed as SS-Freiwilligen-Verband Dänemark) was founded in 1941 on the request of the Danish NS-party (Danmarks Nationalsocialistiske Arbejder Parti (DNSAP)) and with the approval of the Danish government. There were some trouble with recruiting officers until it was decided that they would keep their Danish rank (and pension) when they joined the Waffen-SS. The Danish soldiers swore an oath to the commander of the Wehrmacht and not the usual oath to Adolf Hitler.
Christian Peder Kryssing became the first commander of the unit even though he was not a member (or even supporter) of the DNSAP. Kryssing was soon replaced by pro-Nazi Christian Frederick von Schalburg (who at the time was attached to Wiking division) who finished their training.
Freikorps Danmark was transfered to the Eastern front in May 1942 and were attached to the Totenkopf division. They fought in the savage battles of the Demjansk-pocket and lost 78% of it’s manpower (including Christian Frederick von Schalburg and his successor Hans von Lettow-Vorbeck).

Freikorps Danmark was sent back to Denmark in August 1942 on leave. They returned to the Eastern front in October (with Knud Børge-Martinsen as the new commander) and was stationed near Nevel.
The unit was withdraw from the front in March 1943 and sent to the Grafenwöhr camp (near Nuremberg). It was disbanded 20 May and most of the Danes were transfered to SS-Panzergrenadier Regiment 24 Danmark (of the Nordland division).

According to letters written by Danish volunteers no prisoners were taken after Christian Frederick von Schalburg was killed in action 2 June 1942. 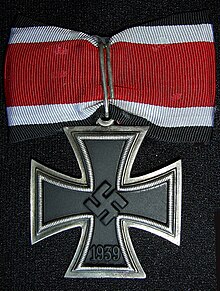 [Some Danes in German war service are known to have received the Knight’s Cross, thus, in February 1945, the SS officer Søren Kam became the third Danish proprietor of the Knight’s Cross. The SS Officer [Oberscharführer?] Egon Christophersen, received it July 1944. Source]

[On 15 February 1945 the newspaper Politiken brought an official statement from Berlin via Reuters that on 7 February Adolf Hitler had awarded Søren Kam, a company Commander of the SS-Panzergrenadier-Regiment “Germania”, the Knight’s Cross for “especially decisive action in the battle against the enemy” making Kam the third Dane to receive this award. The statement proceeded to mention that Kam had been wounded in battle several times and for battlefield bravery been awarded the Iron Cross Second and First Class, the Infantry Assault Badge, Close Combat Clasp and the silver Wound Badge and that he had seen combat in the battles of Dnipropetrovsk, Kharkiv, Cherkasy, Kovel and Warsaw. Source]

The “Freikorps Danmark” cuff title was authorized for this unit.
A collar insignia with the Danish flag was briefly used in 1942 and when the unit was formed many members who transferred from SS-Freiwilligen-Standarte Nordwest continued to wear the trifos (three legged swastika) collar tabs.

A Danish flag with the text “Frikorps Danmark” in the upper right corner was used as unit flag. 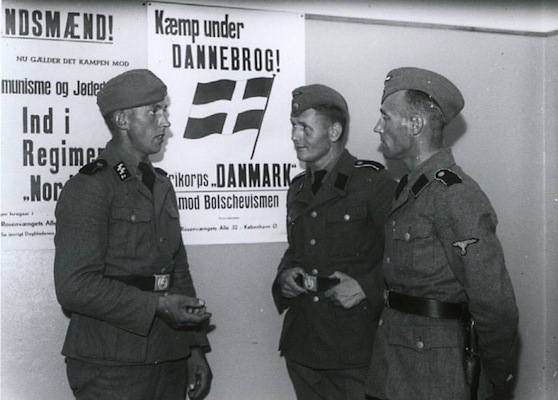 Recruitment poster
(“For Denmark! Against Bolshevism! Sign up at…”) 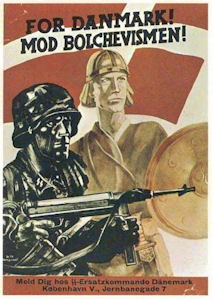 During the course of the war, approximately 6000 (about 8000 according to Oluf Krabbe 1903-1999) Danes joined the corps, including 77 officers of the Royal Danish Army.

The dissatisfaction did not reach common opposition to the SS management decision, but some deserted and some obtained repatriation.