The Horten HX-2 is a two seat flying wing or “Blended Wing Body” aircraft powered by a Rotax 912 iS2 engine. It was built and first flown by Horten Aircraft in 2018 as an experimental aircraft with additional flights in 2019 as part of its flight testing at the Kindel Airfield near Eisenach in Germany.

The first designs for flying wings were made at the beginning of the 20th century. In 1910, Hugo Junkers received a patent for his work on flying wings. The Horten name honors the visionary aircraft designer Reimar Horten (1915-1994). He is regarded as a pioneer in the field of these aircraft and made the most significant contributions to the development of the precursor prototypes PUL-9 and PUL-10 [de].

The HX-2 has a two-seat enclosed cockpit in the centre of the carbon-fibre and glass-fibre honeycomb structure, reinforced to provide roll-over protection. The undercarriage comprises a retractable tricycle landing gear, with a ballistic parachute for emergencies.

By June 2019 there were no published performance specifications for the design, but the company claimed that it would be faster and with greater range that comparable aircraft due the lower drag of its no-fuselage design.

The manufacturer claimed that the design was intended to accept new technology propulsion systems, as they become available.

The HX-2 was exhibited at AERO Friedrichshafen, 2019, and also at EAA AirVenture Oshkosh 2019.

Gotha’s main contribution to the new Luftwaffe was the Gotha Go 145 trainer, of which 1,182 were built. The firm also produced the Gotha Go 242 assault glider and licence-built Messerschmitt Bf 110. Perhaps the most famous Gotha product of World War II, however, was an aircraft that never entered service, the Horten Ho 229. This was an exotic jet-powered, flying wing fighter aircraft designed by the Horten brothers, who lacked the facilities to mass-produce it. Two prototypes flew, the second (powered) version lost in an accident on its third flight. the third prototype- built to a modified design – was almost complete and four more were in various stages of manufacture before the end of the war. The Ho 229 V3 ended up in American hands, and is currently at the NASM‘s Udvar-Hazy Center, under evaluation for restoration.

On 22 February 1944, a squadron of American bombers was sent from Britain to bomb the factory, but due to bad weather, the mission was cancelled before they reached Gotha. On the way back, the Dutch border city of Nijmegen was bombed instead as a ‘target of opportunity’, killing hundreds of civilians. 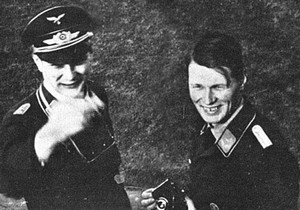 Walter Horten (born 13 November 1913; died 9 December 1998 in Baden-Baden, Germany) and Reimar Horten (born 12 March 1915; died 14 March 1994 in Villa General Belgrano, Argentina), sometimes credited as the Horten Brothers, were German aircraft pilots and enthusiasts. Although they had little, if any, formal training in aeronautics or related fields, the Hortens designed some of the most revolutionary aircraft of the 1940s, including the world’s first jet-powered flying wing, the Horten Ho 229.

As the war ended, Reimar Horten emigrated to Argentina after failed negotiations with the United Kingdom and China, where he continued designing and building gliders, one experimental supersonic delta-wing aircraft and the four-engined flying wing DINFIA IA 38 Naranjero, intended to carry oranges for export. Walter remained in Germany after the war and became an officer in the post-war German Air Force. Reimar died on his ranch in Argentina in 1994, while Walter died in Germany in 1998.

In the late 1940s, the personnel of Project Sign, the U.S. Air Force‘s flying saucer investigation, seriously considered the possibility that UFOs might have been secret aircraft manufactured by the U.S.S.R. based on the Hortens’ designs.