The AEG turbine factory was built around 1909, at Huttenstraße 12-16 in the Berlin district of Moabit. It is the best-known work of architect Peter Behrens. It is an influential and well-known example of industrial architecture. Its revolutionary design features 100m long and 15m tall glass and steel walls on either side. It was a bold move and world first that would have a durable impact on architecture as a whole.

The site was since 1892, occupied by the electrical company founded by August Thyssen and the Thomson Houston Electric Company, the Union-Elektricitäts-Gesellschaft (UEG). The company’s goal was to get into the booming electrical industry, and this site was dedicated to the production of electric trams. But the company quickly encountered financial difficulties, and the Allgemeine Elektricitäts-Gesellschaft (AEG) took over in 1904 and planned the construction of a new turbine factory, as the existing factory had become too small.

The architect Peter Behrens was commissioned with the construction of the new building. More than an architect, Behrens was employed from 1907 by AEG as an artistic consultant and designed the company logo, and other company graphics for the building. He was also in charge of the overall image of the company. Initially influenced by the developing Art Nouveau, the architect turned soon to the Werkbund, which in turn was influenced by the British Arts and Crafts.

The turbine hall was built in 1909 under Peter Behrens as lead architect and engineer Karl Bernhard at the corner of Huttenstraße and Berlichingenstraße streets in Berlin-Moabit. The building mainly consists of steel components, glass, and stone. The original building measures 25.6 m + 12.5 m in width, a height of 25 m and a length of 123 m. Behrens’ design provided a neo-classical look to the industrial building, with weighty (but non-functional) gable ends and trabeated ‘columns’ to either side. David Watkin describes it as a “temple of power”. Similarly, Tom Wilkinson likens it to an “up-to-date edition of the Parthenon”.

In 1939, Jacob Schallberger and Paul Schmidt designed an extension of the hall to the north. The whole building was developed to function as a production site for turbines. It is now part of Siemens, which still operates a gas turbine plant there. This factory was actually designed with such foresight that it still serves the same purpose of producing turbines, a hundred years later.

The other factories that AEG had at that time, mostly known as “crenellated castle-cities”, were places where technology occurred in a dowdy coat of historicist design. Among the requirements and expectations of the AEG was the intent to design an impressive and sophisticated, large scale construction. Peter Behrens created an architecture for the industry that came out of the clamp of hiding behind historic facades and transformed itself into a new self-confidence.

Since 1956 the building has been classified as a protected historical monument, and it underwent a restoration in 1978. On the south side there is a plaque with information about the construction, architects, and heritage status. 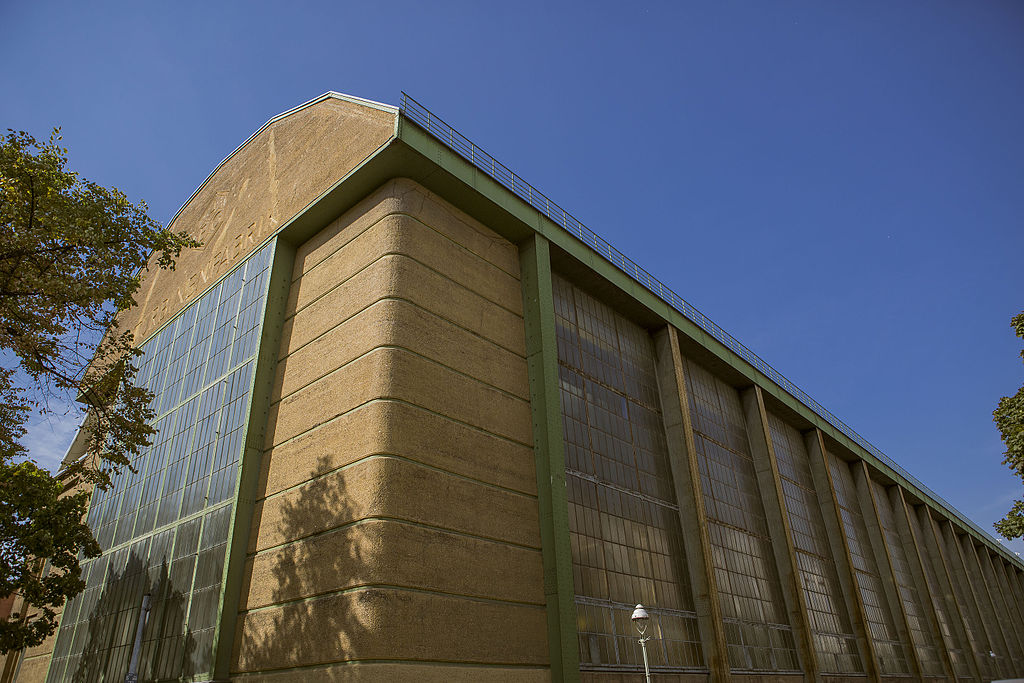 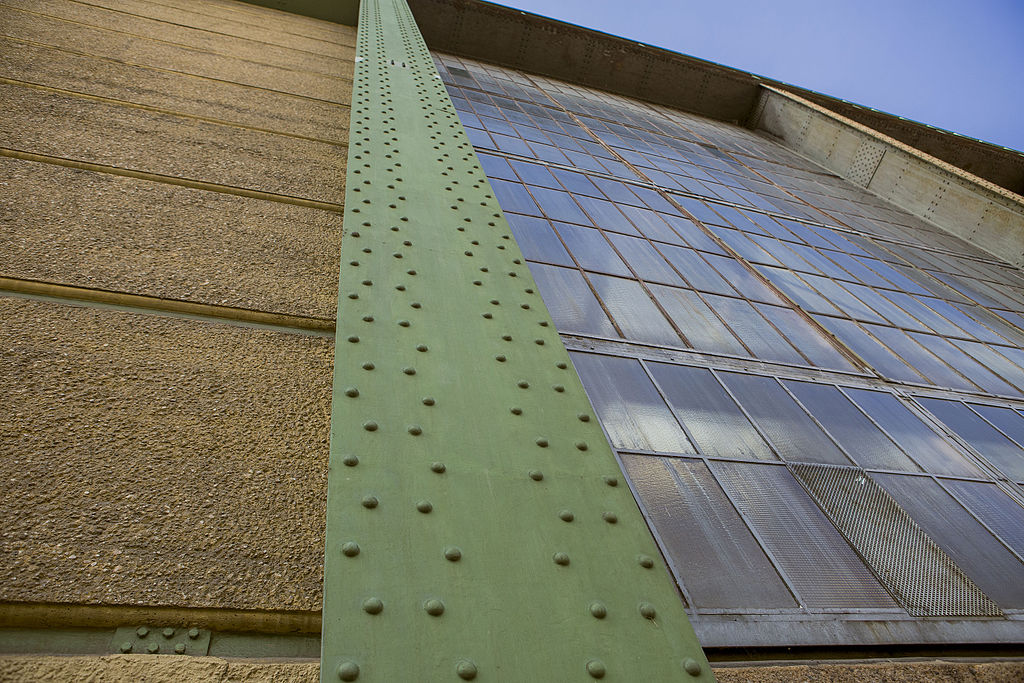 Front view of the historic AEG Turbinenhalle, Berlin. A milestone in industrial architecture by Peter Behrens.

In 1939, Jacob Schallberger and Paul Schmidt designed an extension of the hall to the north.

Allgemeine Elektrizitäts-Gesellschaft AG (AEG) (German: “General electricity company”) was a German producer of electrical equipment founded as the Deutsche Edison-Gesellschaft für angewandte Elektrizität in 1883 in Berlin by Emil Rathenau. After World War II its headquarters moved to Frankfurt am Main.

After acquiring the AEG household subsidiary AEG Hausgeräte GmbH in 1994, in 2005 Electrolux obtained the rights to the brand name AEG, which it now uses on some of its products. The AEG name is also licensed to various brand partners under the Electrolux Global Brand Licensing program. 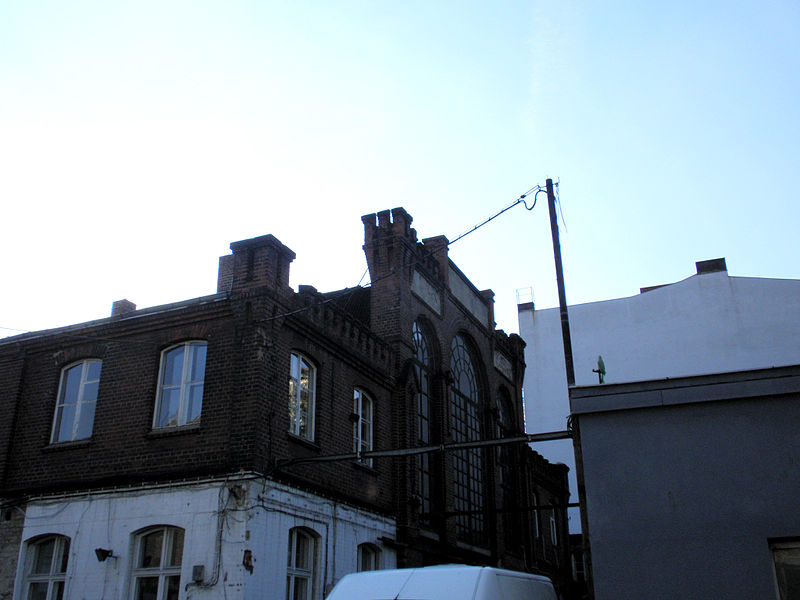 AEG donated 60,000 Reichsmarks to the National Socialist German Workers’ Party after the Secret Meeting of 20 February 1933 at which the twin goals of complete power and national rearmament were explained by Hitler. They joined with other large companies such as IG Farben, Thyssen and Krupp in their support of the Nationalist Socialists, especially in promoting re-armament of the Wehrmacht, Luftwaffe, and Kriegsmarine. During the war itself, they were to use large numbers of forced labourers as well as concentration camp prisoners, under inhuman conditions of work.

AEG worked extensively with the National Socialist German Workers’ Party in Poland. AEG was forced to relinquish Kabelwerk Krakow, a cable manufacturing plant, to the National Socialist German Workers’ Party. Kabelwerk Krakow was located in Krakow-Plaszow and used forced Jewish labor manufacturing cables from 1942-1944. In 1943, AEG began to relocate goods and evacuate workers. Goods were relocated to various places, including Berlin and Sudetenland. When installing electric and lighting systems for the Waffen-SS training grounds in Dębica, AEG used forced labor from Jews placed in the Pustkow labor camp located in Southeastern Poland.

AEG used slave labour from Camp No. 36 at the new sub-camp of Auschwitz III and also known as Monowitz, called “Arbeitslager Blechhammer“. Most of these would die in 1945 during the death marches and finally in Buchenwald.

AEG was a major supplier of grips found on World War 2 P38 pistols manufactured by Walther Arms, Mauser, as well as on the early wartime Spreewerk P38s

In an effort to express regret for their use of Jewish slave labor in World War II, AEG teamed up with Rheinmetall, Siemens, Krupp, and I G Farben to pay DEM75 million in reparations to the Jewish Claims Conference.