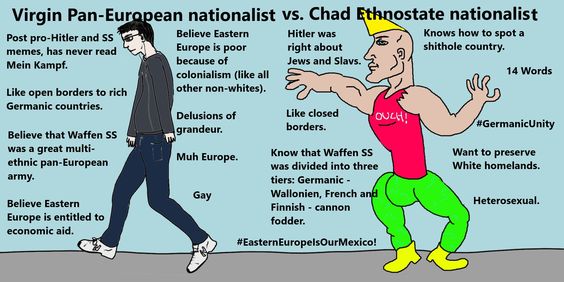 First off, I don’t have anything against any real White Nationalists, National Socialists or Hitler Worshipper.

I believe, that it is counter productive to use Hitler, SS and National Socialism in our struggle. I can say a lot of good (and some bad) about that “movement” and era, but that was then, this is now!

We have enough problem spreading the truth about our current problems, invasion of our home lands, Cultural Marxism, JQ, SQ, etc.. Adding more normie repellent, is not helping us.

I see people unironically using Hitler, SS and National Socialism images and memes and that is fine, with me. But sadly, it is often unbalanced delusional weirdos who are properly not fit to pass as White or Germanic.

If someone is Slavic, pro-Slavic, degenerate, etc. and use Hitler, SS and National Socialism images and memes. Then that person clearly shows signs of delusion, lack of self reflection and lack of self respect.

Top tier White Nationalists are not using these images and memes, why the hell are these P.O.S. junkies doing it!?

Delusions of grandeur or just fake

Something worth thinking about