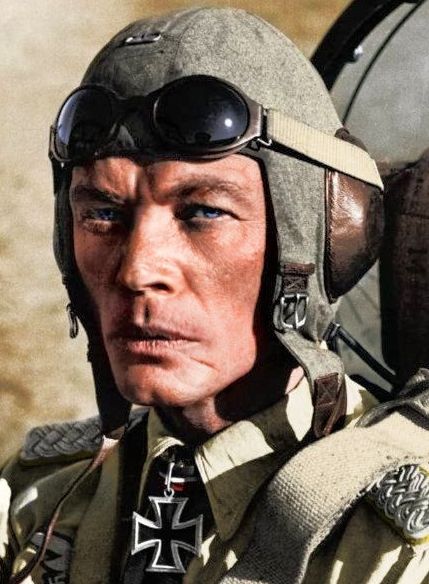 Ernst Kupfer (2 July 1907 – 6 November 1943) was a ground-attack pilot in the Luftwaffe of Germany during World War II who commanded a wing (StG 2) of Stuka aircraft. He was a recipient of the Knight’s Cross of the Iron Cross with Oak Leaves and Swords.

Kupfer was appointed acting Geschwaderkommodore (Wing Commander) of Sturzkampfgeschwader 2 (StG 2—2nd Dive-Bomber Wing) on 13 February 1943. He led StG 2 in the battles of the Kuban bridgehead and Operation Citadel. In April and May, several other fighter and ground attack groups augmented his command. Following the failure of Operation Citadel in July 1943, he took command of all local ground attack units, named Gefechtsverband “Kupfer” (Combat Detachment “Kupfer”). He flew 636 combat missions and was shot down three times, all by ground fire.

In September 1943, Kupfer was appointed inspector of the attack aircraft (General der Schlachtflieger) and promoted to Oberstleutnant. In this role he handled the procurement of the Focke-Wulf Fw 190, which was to replace the old obsolete Junkers Ju 87 and especially the Henschel Hs 123. For this purpose he flew and visited a number of Schlachtgeschwader (ground attack wings) to meet with the various Geschwaderkommodore (wing commanders). He visited Oberstleutnant Kurt Kuhlmey, commander of Schlachtgeschwader 3, in early November 1943 and was killed when his Heinkel He 111 crashed returning to his base in bad weather on 6 November 1943. His body lay undiscovered until 17 November. He received a posthumous promotion to Oberst (Colonel) and was posthumously awarded the Knight’s Cross of the Iron Cross with Oak Leaves and Swords.