Langan has developed a “theory of the relationship between mind and reality” which he calls the “Cognitive-Theoretic Model of the Universe” (CTMU). 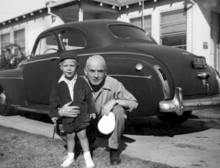 Christopher Michael Langan was born in 1952 in San Francisco, California but spent most of his childhood in Montana. His mother, Mary Langan-Hansen (née Chappelle, 1932 – 2014), was the daughter of a wealthy shipping executive but was cut off from her family. His biological father, Melvin Letman, died or disappeared before he was born.

Langan’s support of “conspiracy theories“, including the 9/11 Truther movement and the “white genocide conspiracy theory“, and his opposition to miscegenation have contributed to him amassing a following among members of the alt-right. Journalists have described some of Langan’s Internet posts as racist, and accused him of veiled antisemitism in some of his other posts.