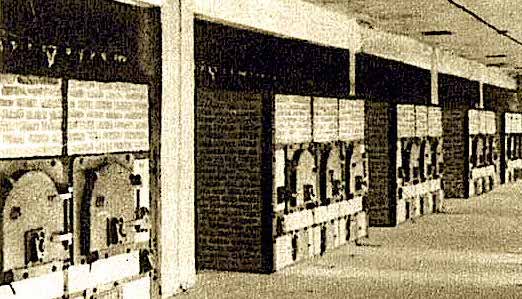 In order to have cremated over 1.5 million Jews in the short span of two and a half years at Auschwitz, the evil “Nazis” needed to cremate 20,000 Jews per day, according to mainstream “official” and “reliable” sources, such as Wikipedia.

There were only five crematoria in Auschwitz with three ovens each, totally 15 ovens — each oven could handle only one corpse at a time (see photo above).

Modern crematories can cremate a corpse in 2 to 7 hours, so it is safe to assume that the crematories at Auschwitz took at least that long, perhaps much longer given their more primitive design.

At 2 hours per corpse, that means each oven could cremate only 12 bodies per 24-hour day.  With all 15 ovens working, that means the maximum capacity of cremation at Auschwitz per day would have been 15 X 12 = 180 cremations per day.

Yet somehow those ingenious Germans managed to cremate 20,000 Jews per day in ovens whose maximum capacity was only 180.