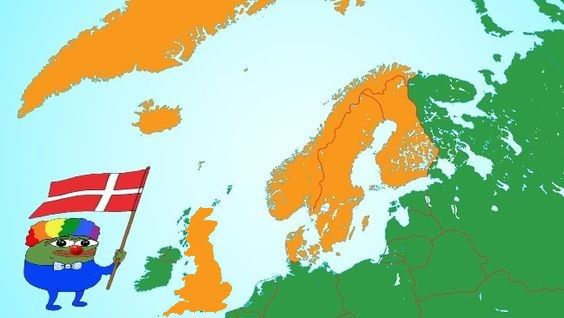 While Genghis was spreading himself around, the Danes were busy fighting other blondes, especially Sweden. Like I’ve said before, Sweden used to be a real military power, a beautiful force — those amazing pikemen who walked into one of Peter the Great’s fortress at Narva in the middle of a blizzard, vastly outnumbered, and astonished the Russian garrison so much they just surrendered out of sheer admiration. Yeah, those blue-and-yellow cross stickers used to fly proudly, not just signal “I’m a Swede, please don’t hurt me!” on a hippie’s backpack.

And the Danes used to whack those tough Swedes around pretty regularly in their non-stop family fights. Take the Sweden-Denmark war of the 1560s. Just to show you how much esprit de corps these countries used to have, the war was fought over Denmark’s right to use three crowns on its flag! The Danes kicked the Swedes’ “numerically superior” asses on land and sea, in a major naval engagement (1564) and land battle (1565). The war didn’t “settle” anything; when countries are young and strong, wars are for their own sake, a matter of pride, staying in shape, keeping limber.

That’s how it should be, and still is in the few decent places (like the Horn of Africa). But little by little, the Danes got depressed and progressive — those two things are the same, if you ask me.

But I was surprised how late it happened. As recently as 1864 Denmark took on Prussia and Austria — pretty much all of Germany. They lost, naturally, but there’s no shame in that. The Danish army was only 40,000 men and fought pretty well in a series of holding actions that made the Prussians pay for every inch they pushed up the peninsula.

They sure made a better fight of it than the French did six years later, even though Denmark was in a hopeless position with none of the French army’s money, manpower and strategic depth. The Danes were just overpowered by a much bigger opponent; the French were humiliated by a smaller one. (Sorry, French people. You know I’m not one of these fools who call you cowards, but facts are facts, and you know yourselves the Franco-Prussian War wasn’t exactly your finest hour.)

Once the 20th century arrived, Denmark pretty much melted into liberal mush. I blame the “Nazis”, because they made militarism look bad. They ruined it for all of us except the jocks and business jerks who own the world now.

Read more here at The Exile