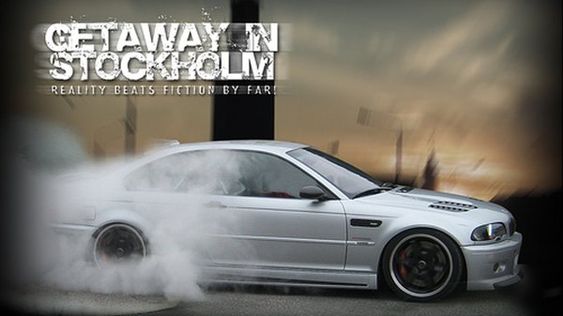 I have forgotten about Getaway in Stockholm, until I saw Muunyayo blog about it.

If you prefer bikes, check out Ghost Rider

In an interview with PB motorcycling magazine, Patrik Furstenhoff, Swedish Wheelie Team Member and widely accepted as the Ghost Rider himself, had this to say:

We saw a movie called ‘Getaway in Stockholm’, which is a car chase movie. But it’s all made up. We couldn’t believe the world was raving about it. The policeman was actually a body builder, he even had baggy pants on. It wasn’t real. There’s a hardcore group of riders and drivers in Stockholm who do this for real, but yet the “Getaway in Stockholm” movie was a rental car pretending to be a police car and it was all in the middle of the night with empty roads. You can print this; it was shit. And we made up the Ghost Rider as a big ‘you suck’ to the car guys.

It is highly likely that the movie Furstenhoff saw was the first one of the Getaway in Stockholm series. While the authenticity of the police car in the first film is questionable, there is no doubt about the authenticity of the police cars in the later parts since many of them are captured on the video less than one car-length away. As a response to Furstenhoff’s critique, Getaway in Stockholm 8 features some motorcycle scenes and some humorous scenes making fun of the Ghost Rider.

There is also a crazy German guy called Turbo Rider, who drives 400+ km/h.