Time to look at the Heeresversuchanstalt Kummersdorf, which means Army Research or Army Testing Facility, which was not only the home of the famous Maus Panzer, but also a key facility of the German Army in both world wars, when it came to weapon development and testing. Generally, Kummersdorf and its various facilities are shrouded in mystery. Likely the most academic and elaborate work up to today is from Günter Nagel and he notes about the Versuchsstelle Gottow (Testing facility Gottow) that has underground facilities and various unidentified ruins. 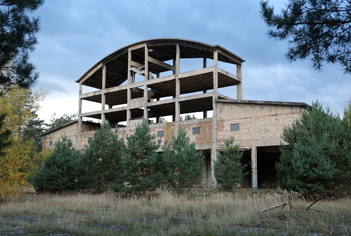 Hall for the “Maus” on the New Verskraft, Army Experimental Station Kummersdorf, 2013