View of the Lilienstein in Saxon Switzerland.

Saxon Switzerland (German: Sächsische Schweiz) is a hilly climbing area and national park around the Elbe valley south-east of Dresden in Saxony, Germany. Together with the Bohemian Switzerland in the Czech Republic it forms the Elbe Sandstone Mountains.

Saxon Switzerland alone has some 1,000 climbing peaks, as well as several hollows. The area is popular with local and international climbers.

The administrative district for the area is Sächsische Schweiz-Osterzgebirge. The fortress of Königstein is a well-known landmark.

The German name for Saxon Switzerland, Sächsische Schweiz, appeared in the 18th century. Two Swiss artists, Adrian Zingg and Anton Graff, were appointed in 1766 to the Dresden Academy of Art.

From their new, adopted home they look eastwards and saw, about a day’s walk away, a hill range. It had a strange, flattish profile, without any actual summits […]

— according to Lothar Kempe

They felt the landscape was reminiscent of their homeland, the Swiss Jura, and reported in their exchange of letters on the difference between their homeland and “Saxon Switzerland”. Previously, the Saxon part of the Elbe Sandstone Mountains had merely been referred to as the Meissen Highlands (Meißner Hochland), Meissen Oberland (Meißen Oberland) or Heath above Schandau (Heide über Schandau).

The description became popular through the publication of the name by Wilhelm Lebrecht Götzinger. In his books he described the area as Saxon Switzerland and made the term known to a wide audience.

In English the usual translation is “Saxon Switzerland”. However other sources call it “Saxony Switzerland” or even “Swiss Saxony”. 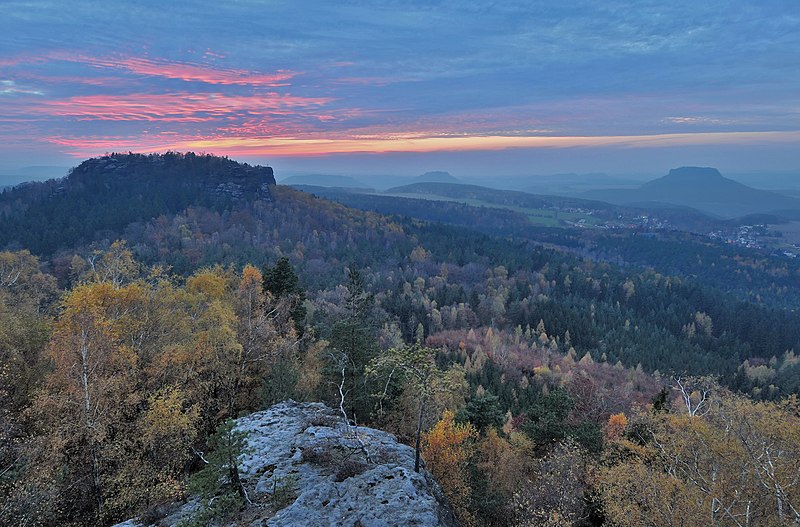 Sunset in Saxon Switzerland from the top of the Papststein. The three large hills are Gohrisch (l), the Königstein Fortress (c) and the Lilienstein (r).

As a rule, two types of hill may be distinguished.

Numerous rock formations in the Elbe Sandstone Mountains, in both Saxon Switzerland and Bohemian Switzerland, are known locally in this region as Steine (“rocks”). Prominent examples are the Königstein, the Lilienstein, the Gohrisch and the Papststein. This description does not, however, include the dome-shaped Kuppen such as the Waitzdorfer Höhe or the Großer Winterberg, whose bedrock is made of volcanic basalt or granitic material.

The Cretaceous sandstone formations soar above the so-called “levels” of their surrounding area, the former level of the River Elbe, and represent the remains of an old peneplain. In the course of the Late Tertiary, uplifting of the Ore Mountains and sideways pressure from the Lusatian Highlands shattered the sandstone plate along lines that intersected like a grid and this, combined with the simultaneously increasing stream velocity of the Elbe and regressive erosion in its side valleys, offered new lines of attack and new routes for the destructive power of water. Initially the larger table hills (Lilienstein), or those already deeply fissured like Zirkelstein, Kaiserkrone or already forested (Kohlbornstein), remained, but these too broke up later as a result of erosive destruction into long ridges (Schrammsteine) or even into individual rock pinnacles (Torwächter). Morphologically harder sections of strata, that resisted karstification longer and more successfully, generally form the uppermost layers. The collapse of rock structures is usually therefore a result of erosion from below or from the flanks. 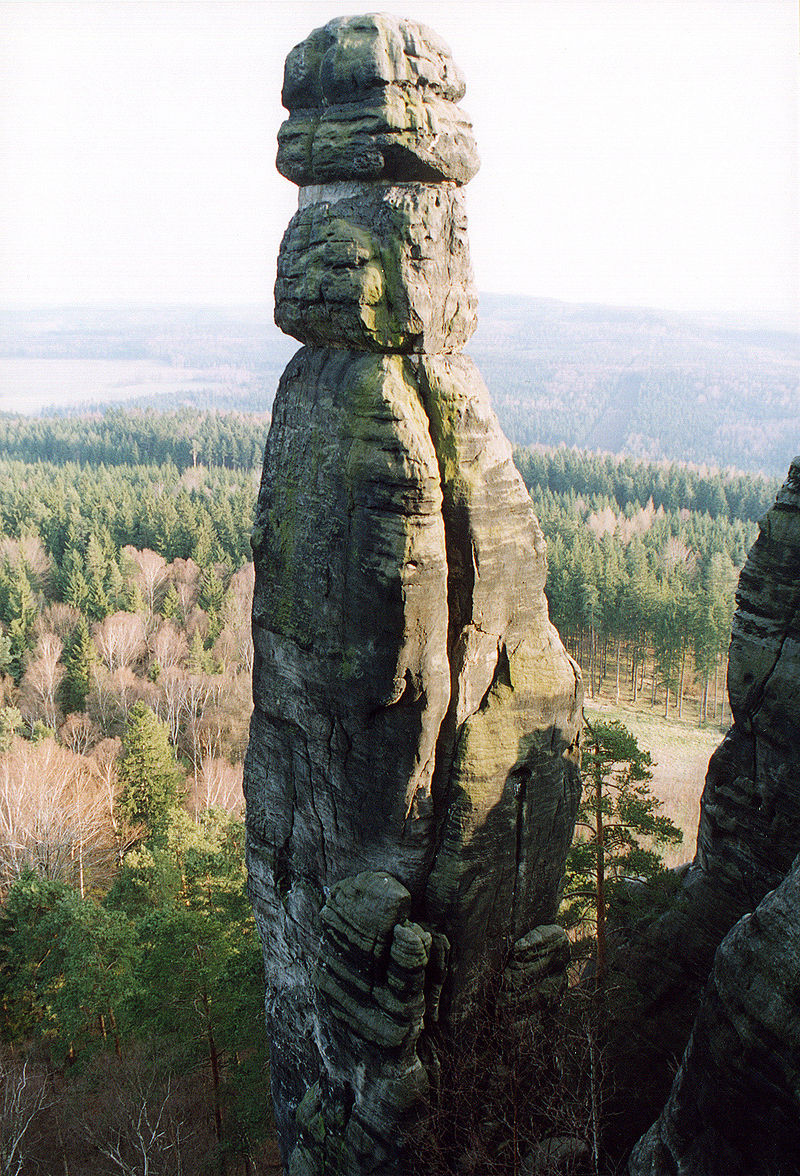 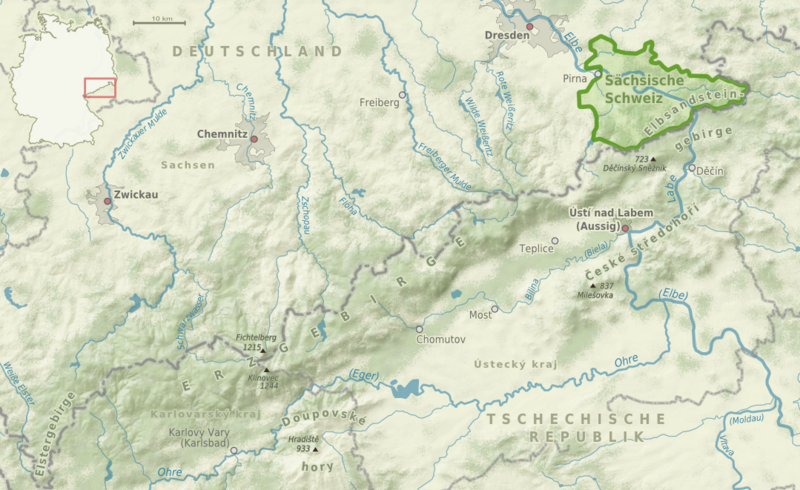 View from Carolafelsen into the Elbe sandstone mountain ranges.

View of the Elbe near Rathen

In September 1990, even before the reunification of Germany, a national park was created in Saxon Switzerland in order to protect the unique natural character of the hill range. The 93 km² area covers two physically separate regions: one near Rathen – the region of the Bastei, Polenz valley, Brand and Uttewalder Grund – and the other embracing the whole Saxon Switzerland Hinterland (Hintere Sächsische Schweiz) between the Elbe and the state border with the Czech Republic and including the Schrammsteinen, Großer Winterberg, Großer Zschand and Kirnitzsch valley. 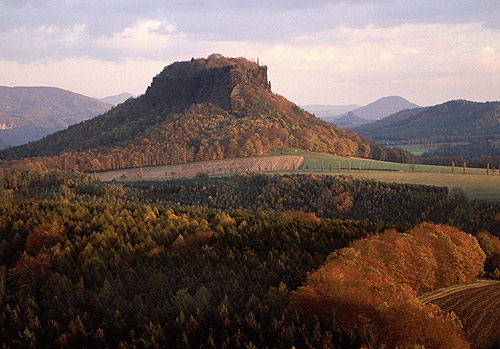 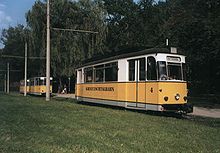 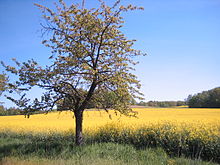 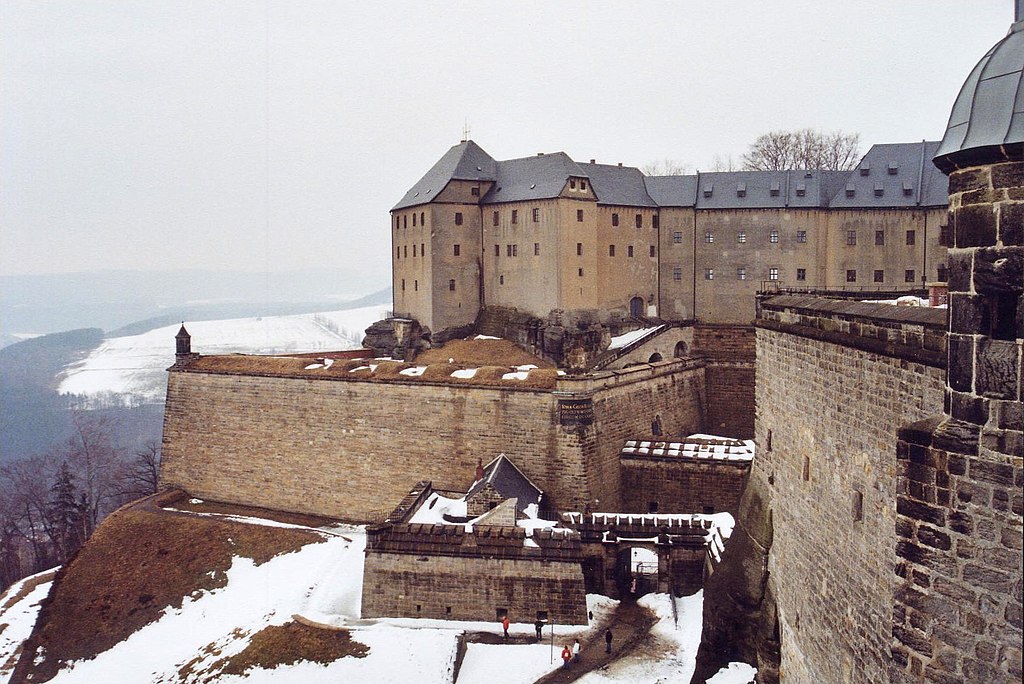