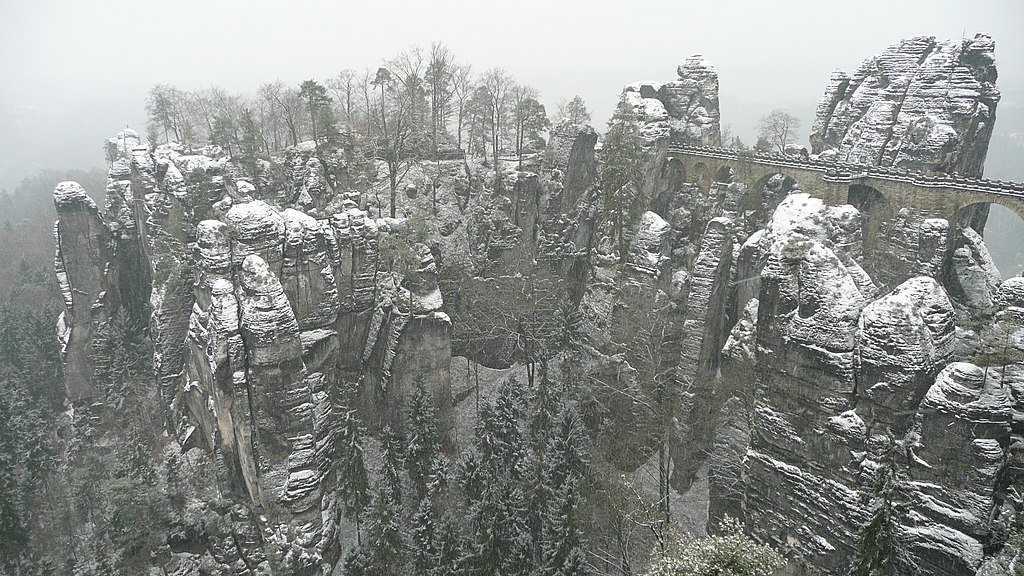 The Bastei is a rock formation towering 194 metres above the Elbe River in the Elbe Sandstone Mountains of Germany. Reaching a height of 305 metres above sea level, the jagged rocks of the Bastei were formed by water erosion over one million years ago. They are situated near Rathen, not far from Pirna southeast of the city of Dresden, and are the major landmark of the Saxon Switzerland National Park. They are also part of a climbing and hiking area that extends over the borders into the Bohemian Switzerland (Czech Republic).

The Bastei has been a tourist attraction for over 200 years. In 1824, a wooden bridge was constructed to link several rocks for the visitors. This bridge was replaced in 1851 by the present Bastei Bridge made of sandstone. The rock formations and vistas have inspired several well-known artists, among them Caspar David Friedrich (“Felsenschlucht”)

The spa town of Rathen is the main base for visiting the Bastei; the town can be reached from Dresden by paddle steamer on the river Elbe.

The very name Bastei (“bastion”) indicates the inclusion of the steep, towering rocks in the old defensive ring around Neurathen Castle. In 1592 the rock is first mentioned by Matthias Oeder in the course of the first state survey by the Electorate of Saxony as Pastey. As the region of Saxon Switzerland was explored and developed for tourism, the Bastei rocks became one of its first tourist attractions. Its lookout point was first referred to in travel literature in 1798 in a publication by Christian August Gottlob Eberhard. One of the first walking guides who took visitors to the Bastei was Carl Heinrich Nicolai, who wrote in 1801: “What depth of feeling it pours into the soul! You can stand here for a long time without being finished with it (…) it is so difficult to tear yourself away from this spot.”

To begin with, the Bastei was only comparatively easily accessible from Wehlen and Lohmen. Numerous artists reached the Bastei over the so-called Painter’s Path, the Malerweg. Caspar David Friedrich painted his famous picture Felsenpartie im Elbsandsteingebirge (“Rocks in the Elbe Sandstone Mountains”) based on the Bastei. Ludwig Richter also sketched the Bastei. From Rathen, access used to be more difficult; but in 1814 a staircase with 487 steps was laid that climbed out of the Wehlgrund valley past the Vogeltelle to the rocks.

At Pentecost in 1812, the Lohmen butcher, Pietzsch, started the first catering services for visitors to the Bastei. From two simple huts he sold bread, butter, beer, brandy, coffee and milk. Two years later a kitchen and a cellar were built below one of the rock overhangs and the lookout point was fitted with a railing. In February 1816, Pietzsch was given a licence to sell spirits; unfortunately the modest huts he had built were destroyed in a fire in September that same year. In June 1819, August von Goethe reported: “Friendly huts and good service with coffee, double beer, spirits and fresh bread and butter really revived the tired wanderer …”. In 1820, the spirit licence went to the Rathen judge (Erblehnrichter), Schedlich.

The development of the Bastei was given significant impetus in 1826. That year, the first solid inn building was erected with overnight accommodation, based on plans by Gottlob Friedrich Thormeyer. From then on the old huts acted as night quarters for the walking guides. The first bridge, called Bastei Bridge (Basteibrücke), was built of wood over the deep clefts of the Mardertelle, linking the outer rock shelf of the Bastei with the Steinschleuder and Neurathener Felsentor rocks. In 1851, the wooden bridge was replaced by a sandstone bridge, due to the steady increase in visitors, that is still standing today. It is 76.5 m long and its seven arches span a ravine 40 m deep.

At the end of the 19th century, the Bastei finally developed into the main attraction of Saxon Switzerland. The existing inn was completely converted and extended in 1893/94. A high pressure water main was laid to it in 1895 and a telephone line in 1897. Around 1900, plans were laid for the construction of a mountain railway from the Elbe Valley to the Bastei, but these did not come to fruition. Even today a ravine southwest of the Bastei is known as the Eisenbahngründel (“Little Railway Valley”). At the beginning of the 20th century, the Bastei road was widened to handle the growing motorisation.

After 1945 the number of visitors increased sharply again, especially at weekends and public holidays, as the Bastei became a place of mass tourism. Between 1975 and 1979 the former inn was replaced by a large, new building, later a hotel. 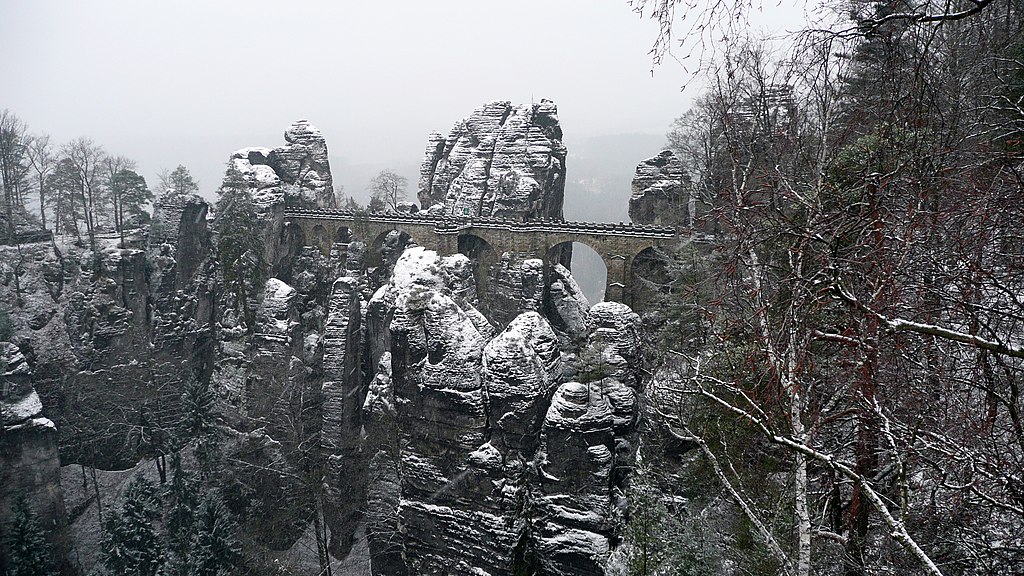 As early as the turn of the 20th century, nature conservationists were pressing for the protection of the unique rock landscape around the Bastei. Plans for the construction of a mountain railway were thus prevented. In 1938 the Bastei became the first nature reserve in the Elbe Sandstone Mountains. Today it is part of the core zone of the Saxon Switzerland National Park, in which especially strict conservation rules apply. 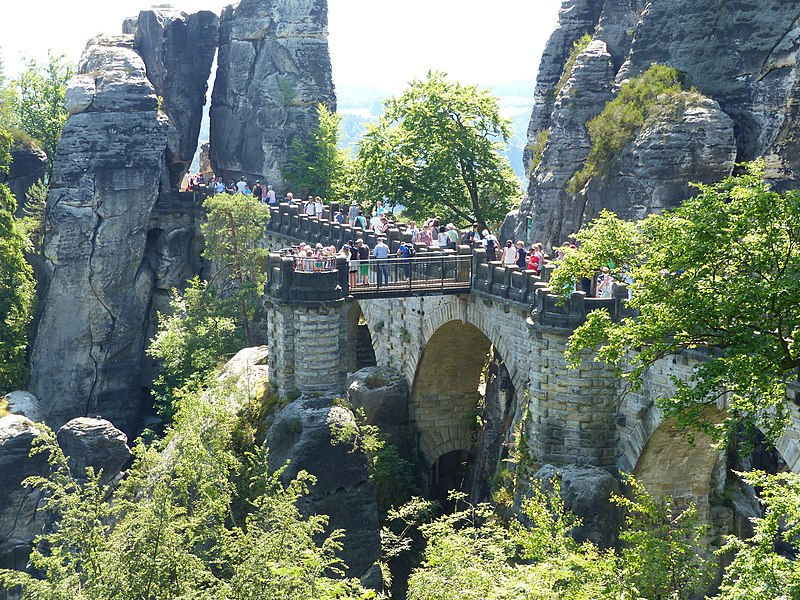 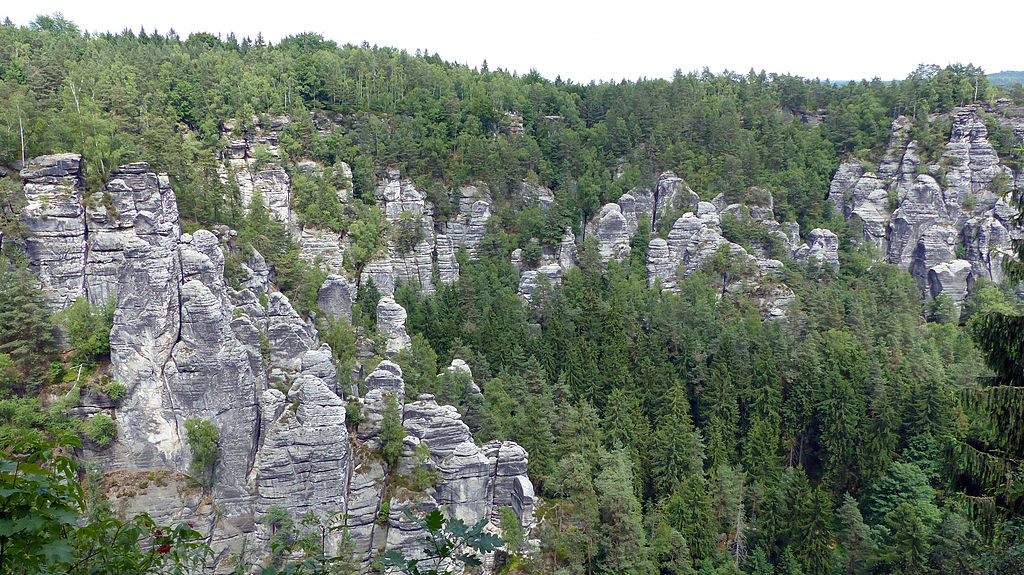 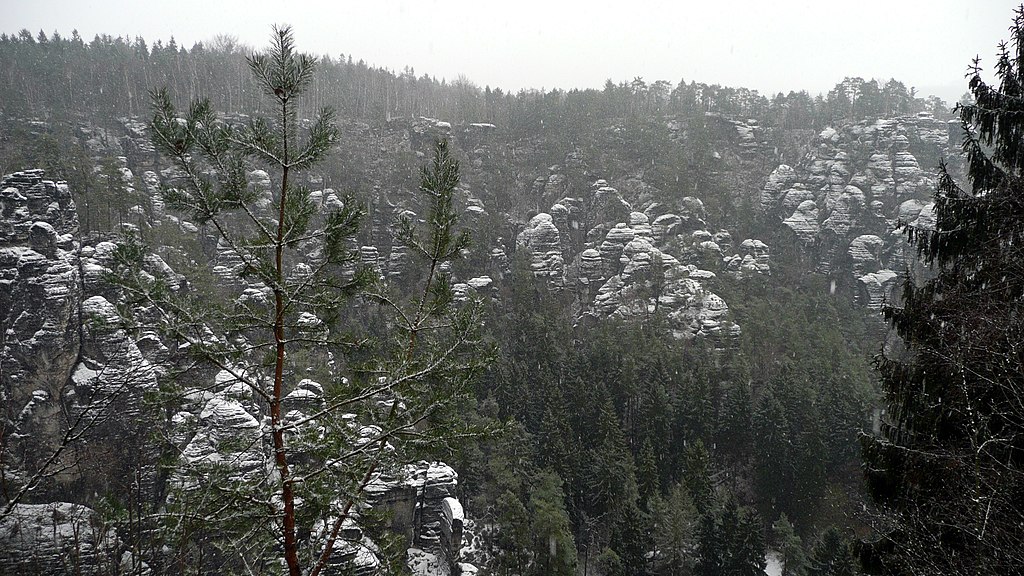 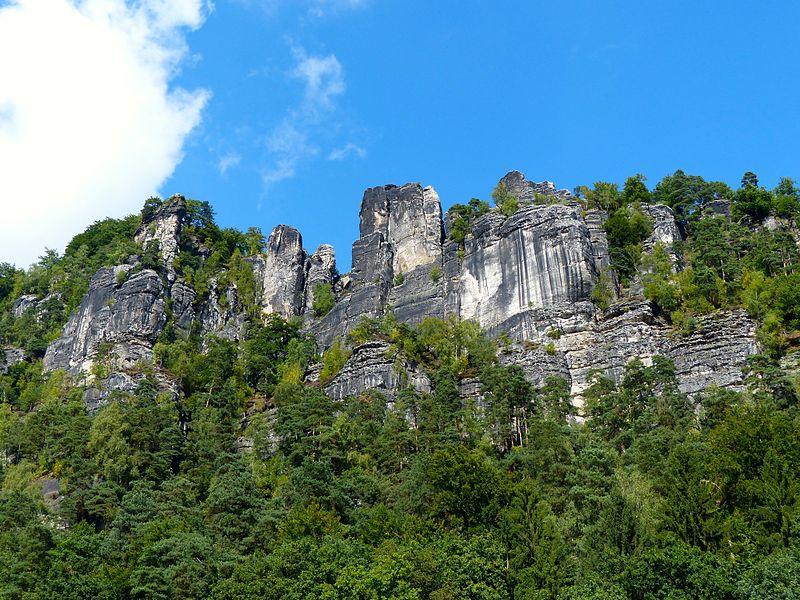 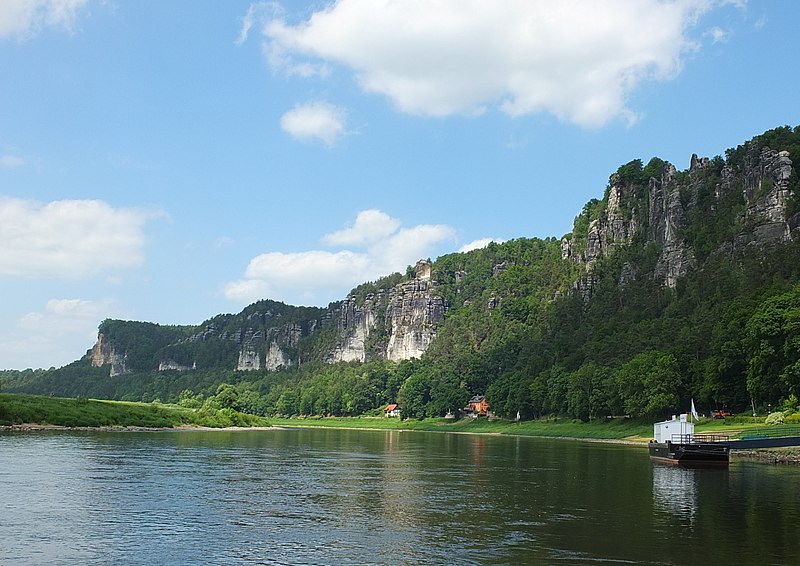 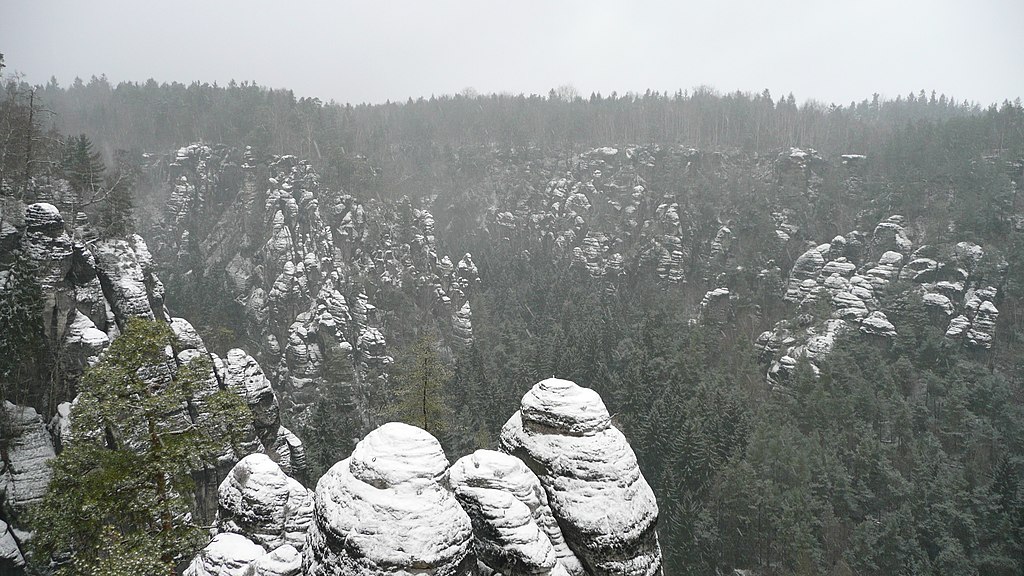