“I was convinced we had done everything possible to keep this a war between warriors and not one of indiscriminately killing women and children,” he said in an interview shortly before his death. 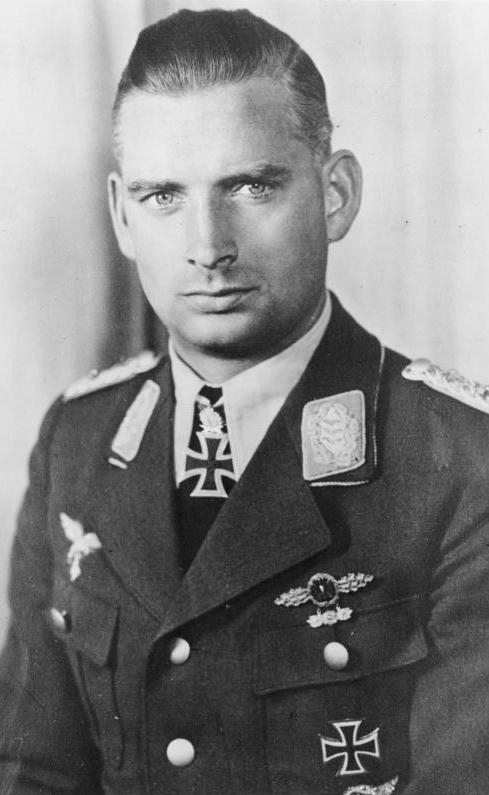 Hermann began his military career as an infantry officer, but was commissioned into the newly formed Luftwaffe (air force) in 1935. From 1936 until 1937 he was a bomber pilot in Condor Legion in the Spanish Civil War.

Early in World War II, Hermann flew bombing missions in the Invasion of Poland and Norwegian Campaign. By 1940 he was Commander of the 7th Staffel of KG 4 and took part in the Battle of Britain.

In February 1941 his group was transferred to Sicily, from where it attacked Malta then fought in the Battle of Greece. In one attack Herrmann sank the ammunition ship Clan Fraser in the Port of Piraeus. The explosion sank 11 ships and made the Greek port unusable for many months.

In July 1942 he was assigned to the general staff in Germany, where he became a confidant of Luftwaffe commander Hermann Göring. In 1942 Herrmann was appointed to the Luftwaffe Operational Staff. He played a role in the creation of night fighter wing Jagdgeschwader 300 in response to the night raids of Royal Air Force (RAF) Bomber Command on Germany in mid-1943.

In December 1943 Herrmann was appointed Luftwaffe Inspector of Aerial Defence. By 1944 he was Inspector General of night fighters and received the Knight’s Cross with Oak Leaves and Swords. At the end of 1944 he led the 9th Air Division.

Kampfgeschwader 4 “General Wever” (KG 4) (Battle Wing 4) was a Luftwaffe bomber wing during World War II. The unit was formed in May 1939. The unit operated the Dornier Do 17, Junkers Ju 88 and Heinkel He 111 medium bombers, with later service on the Heinkel He 177 heavy bomber. The wing was named after General Walther Wever, the prime pre-war proponent for a strategic bombing capability for the Luftwaffe, who was killed in an aircraft accident in 1936.

Formed on 15 November 1939 in Greifswald. I Gruppe formed 1 September, II Gruppe on 23 September and III Gruppe on 1 January 1940, based in Greifswald then Barth. IV Gruppe was formed 27 Oct 1940 as Erg.Sta./KG 30, and in April 1941 was increased to Gruppe strength. KG 30 was equipped with the Junkers Ju 88 and was initially trained as an anti-shipping and maritime attack unit: at the start of October 1939 it was attached to X. Fliegerkorps. On 16 October 1939 it attacked naval ships anchored off Rosyth Dockyard in the Firth of Forth].

II./KG 30 operated under X. Fliegerkorps for Operation Weserübung, the invasion of Norway. The unit Ju 88s engaged Allied shipping as its main target. On 9 April 1940, in cooperation with high-level bombing Heinkel He 111s of KG 26, Ju 88s of II./KG 30 dive-bombed and damaged the battleship HMS Rodney and sank the destroyer HMS Gurkha. The unit lost four Ju 88s in the action, the highest single loss of KG 30 throughout the campaign.

On 9 June 1940 Kampfgeschwader 30 took over Chièvres Air Base. On 17 June 1940 bombers from II./KG 30 sank RMS Lancastria off St Nazaire as she evacuated troops during Operation Ariel, killing some 5,800 Allied personnel. On 15 October 1940 III./KG 30 was redesignated Ergänzungskampfgruppe 6 and a new III./KG 30 was formed in Amsterdam–Schiphol from III./KG 4.

In September 1942 KG 30 was active against Arctic convoy PQ 18. Attacking PQ 18, the group carried out a massed torpedo attack known as the Golden Comb, developed as an anti-convoy measure. This was initially successful, sinking several ships, though the group suffered heavy losses. On 23 November 1944 Kampfgeschwader 30 was redesignated as Kampfgeschwader(J)30, converting to a fighter unit. The unit was disbanded 18 April 1945. 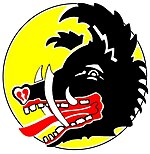 JG 300 had its origins in April 1943, when Major Hajo Herrmann, a decorated bomber pilot, advocated the use of single-seat day fighters as night fighters against the Royal Air Force (RAF) bomber offensive. He suggested that single seat fighters could operate in the bombers’ general target area using the light of target indicators, massed searchlights and the fires on the ground to spot their targets. These operations were tested over Berlin during May and June 1943 and codenamed Wilde Sau.

Recruiting a group of experienced bomber pilots and former instructors with the requisite blind-flying experience, a test unit was set up on June 26, 1943 in Deelen as Stab/Versuchskommando Herrmann to test Herrmann’s theory. Standard Fw 190-As and Bf 109-Gs were used, initially ‘borrowed’ from their parent day units, principally Jagdgeschwader 1 and Jagdgeschwader 11.

Jagdgeschwader 300 employed the Wilde Sau tactic in single-engined fighters for the first time on the night of 3/4 July 1943, when 653 RAF aircraft attacked Cologne’s industrial area on the east bank of the Rhine. The German fighters, taking advantage of the illumination from searchlights, target indicator flares and ground fires, claimed 12 aircraft shot down but had to share their claims with the anti-aircraft batteries who also claimed the 12 bombers. To avoid losses to friendly fire, anti-aircraft batteries were ordered to restrict the height of their flak barrage and the fighters operated above that ceiling.