The physical geography of New England is diverse for such a small area. Southeastern New England is covered by a narrow coastal plain, while the western and northern regions are dominated by the rolling hills and worn-down peaks of the northern end of the Appalachian Mountains. The Atlantic fall line lies close to the coast, which enabled numerous cities to take advantage of water power along the many rivers, such as the Connecticut River, which bisects the region from north to south.

Each state is subdivided into small incorporated municipalities known as towns, many of which are governed by town meetings. The only unincorporated areas exist in the sparsely populated northern regions of Maine, New Hampshire, and Vermont. New England is one of the Census Bureau’s nine regional divisions and the only multi-state region with clear, consistent boundaries. It maintains a strong sense of cultural identity, although the terms of this identity are often contrasted, combining Puritanism with liberalism, agrarian life with industry, and isolation with immigration. 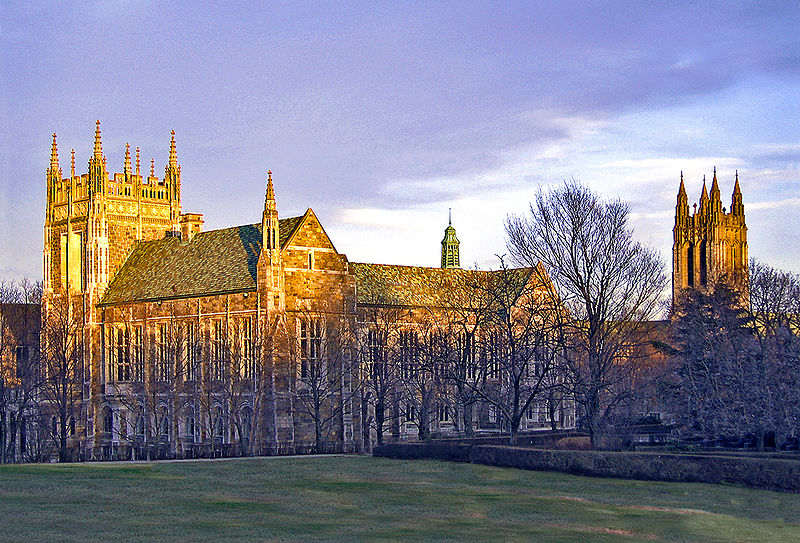 Fall foliage in the town of Stowe, Vermont.

A portion of the north-central Pioneer Valley in Sunderland, Massachusetts.

According to the 2014 American Community Survey, the top ten largest reported European ancestries were the following:

Southern New England forms an integral part of the BosWash megalopolis, a conglomeration of urban centers that spans from Boston to Washington, D.C. The region includes three of the four most densely populated states in the U.S.; only New Jersey has a higher population density than the states of Rhode Island, Massachusetts, and Connecticut.

Greater Boston, which includes parts of southern New Hampshire, has a total population of approximately 4.8 million, while over half the population of New England falls inside Boston’s Combined Statistical Area of over 8.2 million. 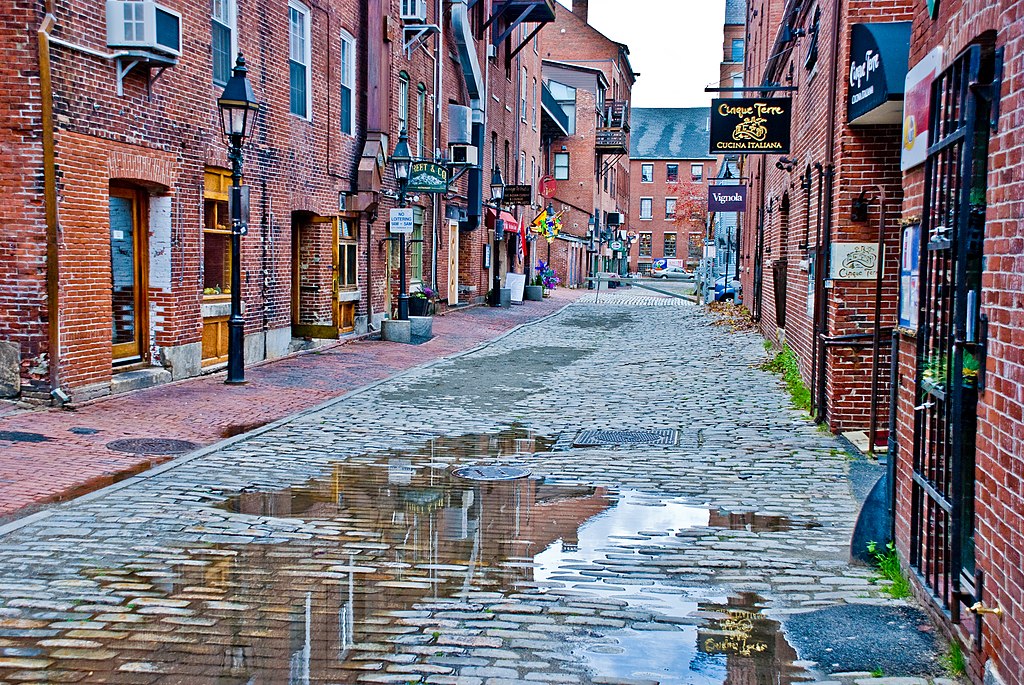 Several factors combine to make the New England economy unique. The region is distant from the geographic center of the country, and it is a relatively small region but densely populated. It historically has been an important center of industry and manufacturing and a supplier of natural resource products, such as granite, lobster, and codfish. The service industry is important, including tourism, education, financial and insurance services, and architectural, building, and construction services. The U.S. Department of Commerce has called the New England economy a microcosm for the entire U.S. economy.

The region underwent a long period of deindustrialization in the first half of the 20th century, as traditional manufacturing companies relocated to the Midwest, with textile and furniture manufacturing migrating to the South. In the late-20th century, an increasing portion of the regional economy included high technology, military defense industry, finance and insurance services, and education and health services. As of 2018, the GDP of New England was $1.1 trillion.

New England exports food products ranging from fish to lobster, cranberries, potatoes, and maple syrup. About half of the region’s exports consist of industrial and commercial machinery, such as computers and electronic and electrical equipment. Granite is quarried at Barre, Vermont, guns made at Springfield, Massachusetts and Saco, Maine, submarines at Groton, Connecticut, surface naval vessels at Bath, Maine, and hand tools at Turners Falls, Massachusetts.

Monument erected in 1830 commemorates the American troops massacred by the British following the surrender of Fort Griswold in the Battle of Groton Heights during the American Revolution.

Flag of the New England Governor’s Conference, which uses a blue field instead of the traditional red.

New England town meetings were derived from meetings held by church elders, and are still an integral part of government in many New England towns. At such meetings, any citizen of the town may discuss issues with other members of the community and vote on them. This is the strongest example of direct democracy in the U.S. today, and the strong democratic tradition was even apparent in the early 19th century, when Alexis de Tocqueville wrote in Democracy in America:

New England, where education and liberty are the daughters of morality and religion, where society has acquired age and stability enough to enable it to form principles and hold fixed habits, the common people are accustomed to respect intellectual and moral superiority and to submit to it without complaint, although they set at naught all those privileges which wealth and birth have introduced among mankind. In New England, consequently, the democracy makes a more judicious choice than it does elsewhere.

By contrast, James Madison wrote in Federalist No. 55 that, regardless of the assembly, “passion never fails to wrest the scepter from reason. Had every Athenian citizen been a Socrates, every Athenian assembly would still have been a mob.” The use and effectiveness of town meetings is still discussed by scholars, as well as the possible application of the format to other regions and countries. 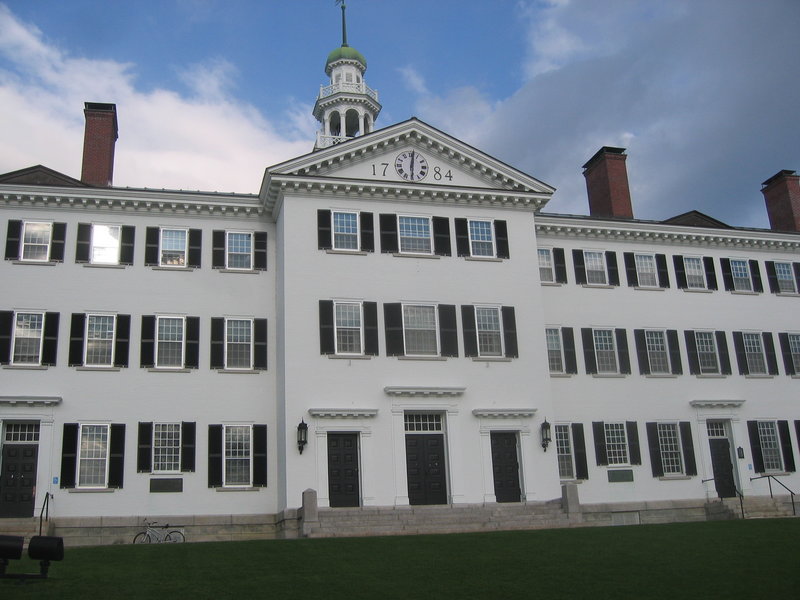 New England is home to four of the eight Ivy League universities. Pictured here is Dartmouth Hall on the campus of Dartmouth College. 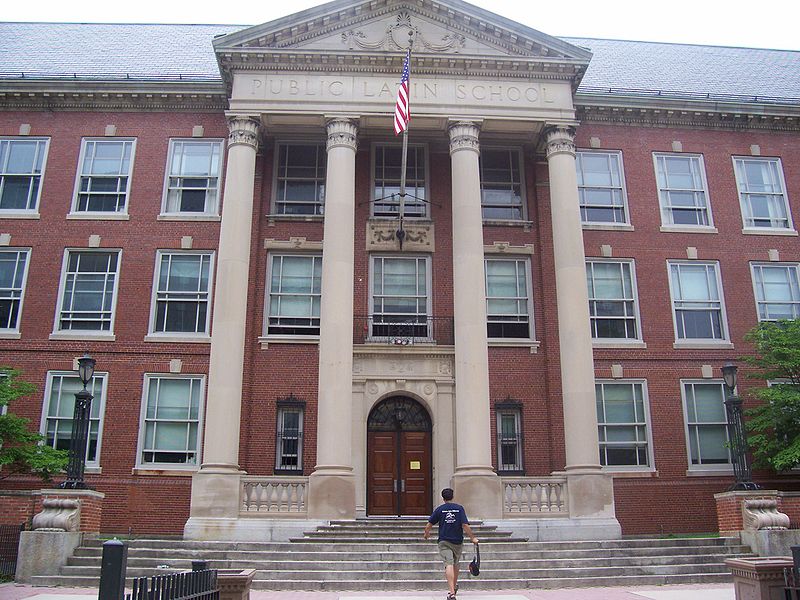 Boston Latin School is the oldest public school in the U.S., established in 1635. 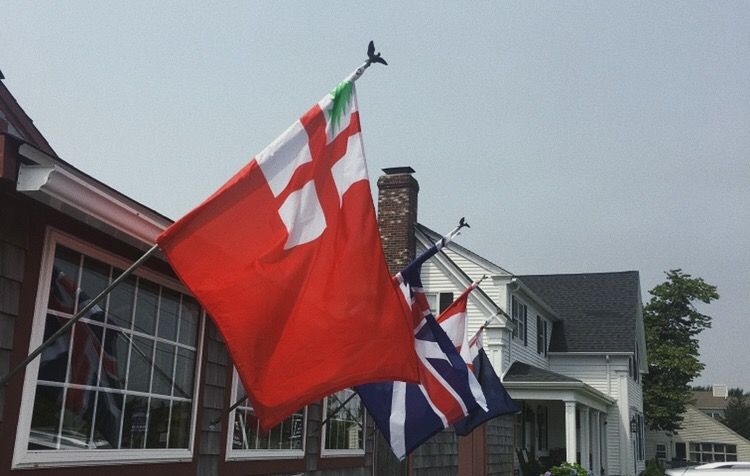 There are several American English dialects spoken in the region, most famously the Boston accent, which is native to the northeastern coastal regions of New England. The most identifiable features of the Boston accent are believed to have originated from England’s Received Pronunciation, which shares features such as the broad A and dropping the final R. Another source was 17th century speech in East Anglia and Lincolnshire, where many of the Puritan immigrants had originated. The East Anglian “whine” developed into the Yankee “twang”. Boston accents were most strongly associated at one point with the so-called “Eastern Establishment” and Boston’s upper class, although today the accent is predominantly associated with blue-collar natives, as exemplified by movies such as Good Will Hunting and The Departed. The Boston accent and those accents closely related to it cover eastern Massachusetts, New Hampshire, and Maine.

Some Rhode Islanders speak with a non-rhotic accent that many compare to a “Brooklyn” accent or a cross between a New York and Boston accent, where “water” becomes “wata”. Many Rhode Islanders distinguish the aw sound [ɔː], as one might hear in New Jersey; e.g., the word “coffee” is pronounced /ˈkɔːfi/ KAW-fee. This type of accent was brought to the region by early settlers from eastern England in the Puritan migration in the mid-seventeenth century.