They called themselves the “assault generation” and they had largely been born in the years during and after World War I.

Legion Wallonie: This was organized as a mountain-infantry battalion. It was formed by the SS from the Frenchspeaking Belgians (Walloons) and was taken over by the Wehrmacht in late 1941 so as not to offend the “Germanic” Flemings already serving in the Waffen-SS. 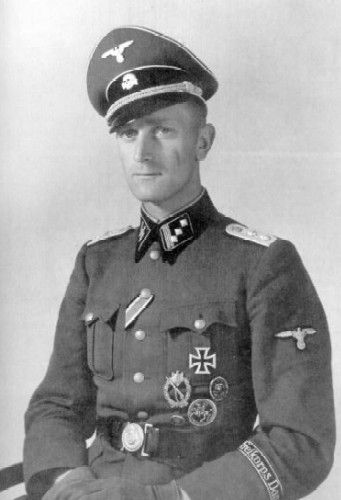 Per Sørensen: Portrait of a Legionary

The 27 year old Danish Army Lieutenant Per Sorensen (formerly Adjutant of the Viborg Battalion) was the ideal model of what the Germans were looking for when they launched the Legionary Movement. On 1 July 1941, Sorensen volunteered for service with the “Freikorps Danmark” motivated by anti-communist feelings and a vague sort of National Socialist attitude. In the autumn nonths he attended the Waffen-SS Officer School at Bad Toelz and in the spring of 1942, rejoined the “Freikorps” as commander of the 1st Company.

During the summer months he led his company in the tough back-and-forth fighting that raged in the relief corridor to the Demyansk Pocket. After several engagements, 1st Company had been reduced from over 200 men to only 40. They had to hold a long stretch of front against strong communist forces. On the afternoon of 16 July 1942, Sorensen telephoned “Freikorp’s” HQ that he didn’t know whether his troops could survive another strong attack but they would stay in position no matter what. That night a Red Army infantry battalion attacked with tank support. The communists were soon in 1st Company’s trenches. From sundown to midnight hand-to-hand fighting raged for possession of the positions. Then suddenly it was all over with the Russians either dead or driven out. Thanks to Sorensen’s leadership, 1st Company held.

In the years to come, whether in White Russia or Estonia, Lativia or Pomerania, the troops under Sorensen’s command would always do the job. Before every action, the tall, slender Dane would make a personal reconnaisance of the terrain and during the fighting he was always as the hottest spots with a machine-pistol dangling from his neck.

To his soldiers, Sorensen had the uncanny habit of attracting the enemy. They passed around the phrase: “Wherever Sorensen is -the Russians will come!” And they usually were right. For his endless solicitude and patience, he received the nickname “På Sorensen” from his men. Time and time again, Sorensen provided the special qualities so vital in ji leader. In January 1944, he took over an en-trapped battalion near Vitino in northern Russia and literally led it to safety by staying at the point of the column on a journey through thick, snow shrouded forests.

After commanding battalions and battlegroups, Sorensen received command of the 24th SS Regiment “Danmark” just to the east of Berlin in April 1945. Finally, the Regiment was reduced to trying to defend a street-car station in the heart of Berlin. While climbing a telephone pole to try and survey the terrain, Sturmbannführer (Major) Sorensen was picked off by an enemy sniper. On the next day, in the midst of the desperate, last battle for the German capital, Sorensen was given a military funeral in the Ploetzensee cemetery by Germans and Danes from the “Nordland” Division.

With shells detonating all around, the body of Sorensen was taken to the cemetery in an armored troop carrier. Over the open grave, Sturmscharführer (Sgt.) Hermann gave a brief eulogy:

We are standing here by the graveside to take our last departure from a courageous Danish comrade, the foremost officer and leader of the Regiment “Danmark”: Per Sorensen! I must, even in this hour give the thanks of my people for you and your many Danish comrades who have stood so loyally beside us. I would like to express from my heart: may you find peace at last in our bleeding city!

As Hermann spoke, the coffin (constructed from ammunition crates by “Nordland” engineers) was lowered into the grave. Two of the Danish officers attending struggled to contain their emotions. Hermann led a last salute and the eight man honor guard fired three salvos over the grave. A woman flak helper tossed flowers into the grave, and each of the Danish and German soldiers attending passed by throwing in a handful of earth. As the great city shook under rumbling artillery fire and great clouds of smoke obscured the sky, the haunting strains of “I had a Comrade” echoed over Sorensen’s grave as the funeral reached its conclusion. The tragic symbolism was complete and fitting: in the very heart of Europe, on its last battlefield, a prototypical representative of the European Volunteer Movement had met his end.

A few of the volunteers trapped in Berlin actually escaped. The Danish Obersturmführer Birkedahl-Hansen, suffering from jaundice, led some men from Regiment “Danmark” successfully out of the city through Spandau to the northwest. They made their way to the seaport of WarnemiInde and took a row boat back to Denmark, thus escaping a long trek to Siberia.

Denmark, which produced a multitude of volunteers (nearly 15 000 including the cream of the Danish officer corps), was relatively lenient to most of their soldiers-only the more prominent ones had to suffer for long. One ex-commander of the “Freikorps Danmark” was executed (a decision officially condemned by the Danish Parliament 30 years later), and the Danish Major-General Kryssing, who had comanded a multi-national ad hoc division on the Eastern Front, was kept in prison 5 years and deprived of his civil rights.

On 12 June 1944 at the “Sunshine” outpost to the southeast of the Narva bridgehead, the Danish NCO Egon Christophersen literally saved the main front, when with a small assault troop he counterattacked German trenches that had been seized by the Russians and regained them in hand-to-hand combat. Christophersen and his men then defended the positions against all attackers, enabling the broken German lines to reconsolidate and hold. Christophersen was awarded the Knight’s Cross.

In 1934, Himmler initially set stringent requirements for recruits. They were to be German nationals who could prove their Aryan ancestry back to 1800, unmarried, and without a criminal record. Recruits had to be between the ages of 17 and 23, at least 1.74 metres (5 ft 9 in) tall (1.78 metres (5 ft 10 in) for the Leibstandarte). Recruits were required to have perfect teeth and eyesight and provide a medical certificate. By 1938, the height restrictions were relaxed, up to six dental fillings were permitted, and eyeglasses for astigmatism and mild vision correction were allowed. Once World War II commenced in Europe, the physical requirements were no longer strictly enforced. Following the campaign in the West in 1940, Hitler authorized the enlistment of “people perceived to be of related stock”, as Himmler put it, to expand the ranks. A number of Danes, Dutch, Norwegians, Swedes and Finns volunteered to serve in the Waffen-SS under the command of German officers.

Not all members of the SS-Germanischen Leitstelle (SS-GL) or the RHSA stressed the nationalistic tenets of the NS state with respect to the war and occupation, but instead looked to pan-Germanic ideas that included disempowering the political elites, while at the same time, integrating Germanic elements from other nations into the Reich on the basis of racial equality. One of the leaders of the SS-GL, Dr. Franz Riedweg (an SS-Colonel), unambiguously emphasized:

“We must be clear about the fact that Germanic politics can only be resolved under the SS, not by the state, not by the bulk of the party!…We cannot build Europe as a police state under the protection of bayonets, but must shape the life of Europe according to greater Germanic viewpoints.”

Recruitment began in April 1940 with the creation of two regiments: Nordland (later SS Division Nordland) and Westland (later SS Division Wiking). As they grew in numbers, the volunteers were grouped into Legions (with the size of battalion or brigade); their members included the so-called Germanic non-Germans as well as ethnic German officers originating from the occupied territories.

Against the Führer’s wishes—who forbade using military units of so-called “racially inferior” persons—the SS added foreign recruits and used them to flexibly overcome manpower shortages. Some of these foreign Waffen-SS units were employed for security purposes, among other things.

After Germany invaded the Soviet Union during Operation Barbarossa, recruits from France, Spain, Belgium (including Walloons), the territory of occupied Czechoslovakia, Hungary and the Balkans were signed on. By February 1942, Waffen-SS recruitment in south-east Europe turned into compulsory conscription for all German minorities of military age. From 1942 onwards, further units of non-Germanic recruits were formed. Legions were formed of men from Estonia, Latvia as well as men from Bosnia, Herzegovina, Croatia, Georgia, Ukraine, Russia and Cossacks.

However, by 1943 the Waffen-SS could not longer claim overall to be an “elite” fighting force. Recruitment and conscription based on “numerical over qualitative expansion” took place, with many of the “foreign” units being good for only rear-guard duty.

A system of nomenclature developed to formally distinguish personnel based on their place of origin. Germanic units would have the “SS” prefix, while non-Germanic units were designated with the “Waffen” prefix to their names.

The formations with volunteers of Germanic background were officially named Freiwilligen (volunteer) (Scandinavians, Dutch, and Flemish), including ethnic Germans born outside the Reich known as Volksdeutsche, and their members were from satellite countries. These were organized into independent legions and had the designation Waffen attached to their names for formal identification. In addition, the German SS Division Wiking included recruits from Denmark, Norway, Finland, Sweden, and Estonia throughout its history.

Despite manpower shortages, the Waffen-SS was still based on the racist ideology of National Socialism, thereby ethnic Poles were specifically regarded as “second-class people” and the Poles were the only ethnic group from whom neither voluntary SS units nor uniformed auxiliary police were ever created.

Recruitment efforts in 1943 in Estonia yielded about 5,000 soldier for the 20th Estonian Waffen-SS division. In Latvia, however, the Germans were more successful, as by 1944, there were upwards of 100,000 soldiers serving in the Latvian Waffen-SS divisions. Before the war’s end, the foreigners who served in the Waffen-SS numbered “some 500,000”, including those who were pressured into service or conscripted. Historian Martin Gutmann adds that some of the additional forces came from “Eastern and Southeastern Europe, including Muslim soldiers from the Balkans.”

Danes in the Luftwaffe

About the Allied Bombing of Denmark

The Forgotten (and Flawed) British Invasion of Iceland (Denmark) – Operation Fork (May, 1940)

An interesting meeting at Plassenburg Castle

20th of July 1941, when the first Danish volunteers arrived in Hamburg

The Swedish Volunteers in the Waffen-SS

Twilight of the Gods by Thorolf Hillblad Full Audiobook

Battle of the Netherlands

How Dutch Waffen-SS Volunteers Were Trained During World War II

Foreign Volunteers for the Waffen-SS were Highly Intelligent and Ambitious

Flemish Volunteers for Germany during World War II: the Flemish Legion and the Flemish Waffen-SS