by tonytran2015 (Melbourne, Australia).
When a pension fund with legislated rates of pay out operates in a negative interest environment, its fund is bound to be depleted.

You have to ask how can it have money to pay out at the legislated (high positive) rates. It can only do that if it is injected with goverment printed fiat money or if it has an ever expanding number of subscribers (a type of Ponzi scheme).

The stop on payouts byDallas police fire pension board isno surprise. It is only the tip of the iceberg.

In general, negative interest rates have revealed the unsustainability of many pension plans with legislated rates of payout.

An increasing number of Europeans are turning to firearms and other self-defense weapons to protect themselves, according to a Reuters report. Many have attributed the spike in permits to heightened fears caused by recent terrorist attacks.

Applications for gun permits are climbing in at least three European countries, according to figures cited by Reuters.

The report comes after Czech President Milos Zeman announced he was in favor of residents owning firearms in the wake of the Munich mall shooting in July. 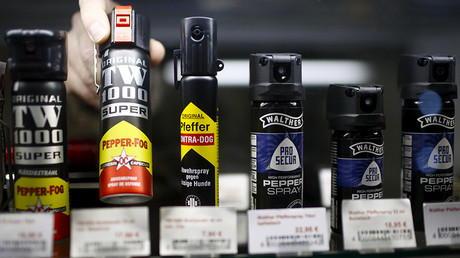 “Citizens should be able to arm themselves…in order to be able to act against these terrorists,” he told TV Nova at the time.

Switzerland has also seen a drastic rise, with all 12 cantons which responded to a Reuters inquiry reporting an increase in gun permit applications in 2015. Interim 2016 figures show a further rise.

Gun sellers in Austria also said that interest in weapons grew after a large number of refugees arrived in the country via the now-closed ‘Balkan Route.’

“Fear is very much a driving force,” said Robert Siegert, a gunmaker and the weapons trade spokesman at the Austrian Chamber of Commerce. “That’s what we keep hearing from salespeople in shops.”

Although the firearm trend does not seem to be taking place in Germany – the site of a number of recent attacks by terrorist-connected or mentally ill people – residents there are opting for less lethal self-defense weapons such as blank guns and pepper spray. Permits for carrying such devices have risen almost 50 percent.

But the number of Europeans opting for firearms and other self-defense weapons could be even higher, as there is no up-to-date data at the European level. Instead, such numbers must be released by national and regional authorities, and those figures are not always comprehensive or comparable.

An official reason for the spike in sales has not been published, but some have speculated that recent terrorist attacks in Europe are behind the purchases.

“There’s no official explanation for the rise, but in general we see a connection to Europe’s terrorist attacks,” Hanspeter Kruesi, a police spokesman in the Swiss canton of St. Gallen, told Reuters.

Those thoughts were echoed by Daniel Wyss, who is president of the Swiss weapons dealers’ association and runs his own gun store.

Arthur Kemp was born in Southern Rhodesia in 1962. Educated in South Africa, he holds a degree in Political Science, International Politics and Public Administration, having studied at the University of Cape Town and the University of South Africa. He is the owner of Ostara Publications and the author of eleven books, including March of the Titans: The Complete History of the White Race.

Arthur joins us for a look at how the aspects of racial homogeneity and racial disillusionment (multiculturalism) have historically contributed to the rise and fall of civilizations. We begin by considering the essential questions of what causes culture and what happens when a civilization’s creators vanish. Arthur talks about the misconceptions of early English colonialism and the vastly different process of mass foreign invasion transpiring in the West today. He addresses the proclivity of the White race to explore the world and provide humanitarian support to the less fortunate, along with the consequences of these interventions. We discuss some logistics of the Out of Africa theory and the role of environment in racial differences, touching on the bureaucratic baloney that thwarts modern day archaeologists from properly investigating tremendous troves of ancient human remains holding clues of Europeans’ origins in the Northern Hemisphere. Then, Arthur explains the dire reality of the population replacement events being orchestrated by the West’s rulers, and we deliberate how to wake up the ill-informed masses to their looming extinction. Kemp also gives an account of his life in South Africa during the ANC’s takeover, relating the hard fact that demographics ultimately dictate the rules. Our conversation rounds off with thoughts on the viability of recruiting quality Europeans to create a great ethnostate and the terrific potential that exists when enough Whites are able to unlearn their self-defeatist programming and abandon the egalitarian fantasies driving their cultures to demise.

You’re being lied to by the fitness and supplement industries, the government, and just about anyone trying to sell you on losing weight and Stan The Rhino Efferding is going to set you straight. Stan is one of the Strongest Raw Powerlifters of all time, an IFBB Pro Bodybuilder, and a brilliant mind in the strength training community so listen up.